I woke up when I heard Max’s noisy battery-powered toy car driving around in the living room. It’s quarter to seven — time to get up.

I made coffee and tuned in CBS Sunday Morning on the TV. When Max heard the opening trumpet fanfare he said it was soon time to go to church. We are all creatures of habit! 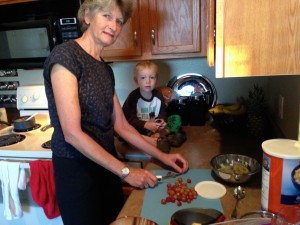 Sue did NOT make french toast as per my request. No, there would be no more bacon frying up our house this morning. We had ordinary toast with peanut butter and jam. Or, in the case of Tim, we had JAM with a bit of toast to hold it up. And Sue and Max had PORRIDGE!

After breakfast Alex and Sue went for a long walk. I watched a bit of NFL Sunday before the first game began at eleven. Today is the final slate of regular season games for the NFL this year — and there are still a few playoff match-ups to be decided. Max was feeling a little grumpy — fussing with another tooth trying to work its way through his gums.

When the girls got back from their walk they got lunch ready. Everyone felt better after that. Max went for a nap. I got a bit excited when it looked like ‘my’ teams would win for a change. My Giants, who are out of the playoffs anyway, were beating the Eagles. The Cardinals looked like they had a good chance against the stumbling 49ers. The Lions were in pretty good against the Packers. Even the Seahawks were down 6-0 to the Rams at halftime. Of course, all of that quickly reversed itself as the afternoon went on, and all ‘my’ teams LOST! I’m starting to understand what it must feel like to be a Bomber fan! 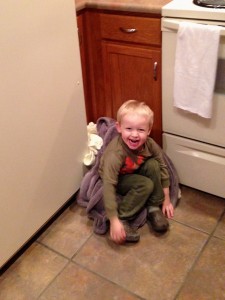 Tim and Alex were going out on a date tonight — leaving us to spend the evening with Max. He set up a bit of a camp in the kitchen. He played with his sticker book. Sue did a puzzle with him until the Cardinal game was over. Then we bundled up, took the flashlight, and marched off to the Hitching Post for supper. Chicken tenders and fries. Max ate heartily. And in between bites, he SANG heartily. And when we let him guide us home after supper, that flashlight shone at the stars, the moon, passing cars, cactuses and Christmas lights — everything EXCEPT our path.

Back home, the Sunday night game was already in the second quarter when Sue got Max into his PJs and read him his bedtime story. And before the game was over, the kids came back from their evening out, shopping bags in hand. I tried again to get some of my downloaded shows (“The Trip to Italy”) to play on my AppleTV but the streaming was too slow and we gave up. Oh well, it was 10:30, bedtime for most of us.