Started working on my website shortly after 6 in the morning when I got up. It’s supposed to be ‘done’ today. We’ll see. Around 11am the Bishops arrived. They came to pick up their car, their golf clubs, and some clothes. Turns out they are staying here (at a friend’s house) for the next month! Well, the car didn’t start. They called CAA and within half an hour the service truck was here. The guy tried to pick the lock on the car but finally resorted to breaking in ‘the old fashioned’ way — using a long ‘coat-hanger’ style rod to unlock the door. Popped open the hood, put the charger on the battery, and voila! the car started. We all had a drink in the back yard while the car ‘charged’ up. When they left Sue made us a sandwich and we had our lunch. It was 1:30, two hours AFTER ‘official’ lunch time. I did my best to finish up the website and finally signed off on it at around 4pm. Then Sue and I went for a quick walk to Walgreen’s to pick up some lipstick (I’m almost out!) and to get our exercise. 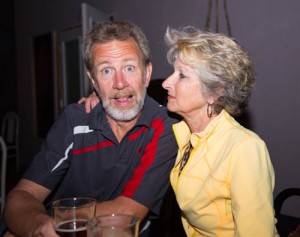 We got home, showered, and then had to hurry across the road to the Hitching Post where we met the Driedgers and the Neufelds (Hans and Chris) for pizza. That place was hopping tonight! And under-staffed! I guess the pizzas we finally got had been properly aged (and cooled) on the serving counter. Not bad pizza for Saturday morning, but not so hot for Friday supper. But we got to watch (another) great sunset from our table. Marylou and Hans got a bit camera-happy. The Driedgers and Neufelds were off to see a concert at the Methodist Church — the ‘Carpe Diem’ String Quartet. Well, we’re IN. No matter that the boys were more interested in watching the Jets on TV — tonight we were in for a ‘cultural’ experience. And so while the Driedgers pedalled and the Neufelds burned some fossil fuel, the Nikkels marched as fast as they could down to the big church (“OUR” church; we’ve been there before — a couple of years ago, to see an ORGAN concert!). Made it just in time. And a good thing that we hurried; it looked like all the front row seats were gone. The group included 4 players: first and second violin, a viola, and a cello. A mix of jazz, classical, and country. ‘Something for everybody.’ Even an intermission! The Neufelds gave us a ride back to our main gate. Cool evening. Lots of stars. Still lots of cars at the Hitching Post — I guess that ‘guy and girl singing along with a karaoke soundtrack’ band really got the old fogeys hopping tonight — it’s WAY past their bedtime! Not us, though. We’ll watch the CBC News and have a bowl of chocolate-peanut-butter ice cream for night-snack. And THEN we’ll go to bed. Party Animals!