I went to Mountain Brook in the morning — they were having a free ‘Demo Day’ where 4 or 5 golf club companies were showing their new products. I wanted to find a driver that would feel similar to Sue’s Callaway driver, which I have started using all the time. So I hit a bucket’s worth of balls with a new ‘Big Bertha’ — and it felt good. But I didn’t buy the club. Ed and Lyle showed up too. Lyle was hitting balls off the end of the driving range with an Adams driver! The day was cool and cloudy — really the first REAL cloudy day we’ve had here. But a good day to golf. 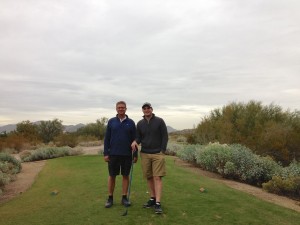 I went home for lunch and left just after 12 noon to pick up the Peters boys. We drove out to the Longbow Golf Course. Ed bought a discount card which gave us each a $20 savings on green fees. We had a 1 o’clock tee time and probably got on a bit early. I managed to dribble my first shot just over the desert scrub onto the grass. Not a great start. I continued to make my way down the first fairway from side to side until I got to the green. I criss-crossed the green. Holed out the first hole with a nine. Well, at least my play made the Peters boys look like pros.

We wore sweaters all day and no sunglasses. And the course was very nice — so nice that airplanes were flying low overhead all the time. I don’t think my nephew Matt Penner would have been able to golf here at all — he’d be looking up too much. Actually, I was looking up a fair bit too — at least that’s the critique I got every time I shanked another shot! But things got better as the afternoon progressed. And anyway, we had fun.

By the time we were done we’d even had a few (a VERY few) droplets of rain. And the cloud cover made it seem darker than usual. All three of us ended up with respectable scores — I think I shot a 96, which is very good for me these days. I dropped the boys off at their house and headed home.

Supper was ready when I got home. After supper I watched the CBC news a few times. After Jon Stewart and Jimmy Fallon I went to bed.