And just like that, it’s time to say goodbye. We’re about to be abandoned here in G.C.

I got up and made a coffee. JP was up for a while already. I poured my coffee into my handy travel mug and Jim and I took his Honda out to the car wash across the road for a rinse before breakfast. Breakfast for me, not for JP. Jim and Bonny left us this morning at 9:30. They were heading out to the Good Wife Trailer Park to go for breakfast with half the Grace Church from Steinbach (they’ll see the other half when they get to Palm Springs later this afternoon). Sue, who had a better night than last night but was still a little nervous about eating, cut up some fruit and made toast.

I listened to some music and Sue read. I was going to work on sorting out our Danube photos but then I got another idea. The sun was shining and the forecast was for slightly warmer temperatures. I hadn’t golfed since last Saturday — not even gone to the driving range. I sent Ed Peters a text asking if he was golfing today. Yep. Ed called the Gold Canyon golf course and changed his tee time to 12:15 for the two of us. So I aborted my plans and hurried out to the course. Sue was happy to stay home and play with her iPad and recuperate.

I had a hotdog at the course and took a few swings on the driving range — and then we were off. Sidewinder course. Just the two of us. We’ll hit from the blue tees. We had to wait a few minutes for the group ahead, but overall, the pace of play was today was right on. Unfortunately for me, the 4 or 5 long straight drives I took on the driving range did NOT translate to good shots on the course (but what else is new!). Ed had golfed this course yesterday as well, but today would be his last round until sometime this spring or summer back in Manitoba — he and Val are leaving Gold Canyon tomorrow. 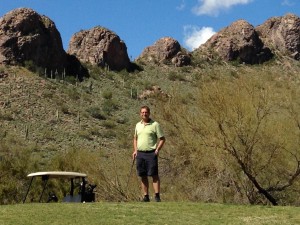 We had some good shots and some not as good. The temperature seemed to get warmer in the late afternoon; at least the cool wind let up a bit. The dreaded Hole #15 (which ‘features’ water with ‘ball magnets’ in it) once again reared its ugly head at me, and on the final hole I had to invoke the mercy rule (not marking more than a ’10’). But it will take more than that for Sidewinder to ‘beat me’ — I’ll be back.

When I got home from golfing Sue was skyping with Max. Ed Peters brought a ‘care package’ of assorted leftover libations to our place and said goodbye. And then it was time for Sue and me to get back into our routine. I queued up a few episodes of ‘Suits’ while Sue warmed up supper. We took our positions in front of the TV and watched a few episodes of Suits until 10 o’clock. Then we switched to PBS for a pretty good musical special and at eleven it was time for the CBC National. And that was it for Wednesday, March 4, here in Gold Canyon.