For the sun rises with its scorching heat and withers the grass; James 1:11 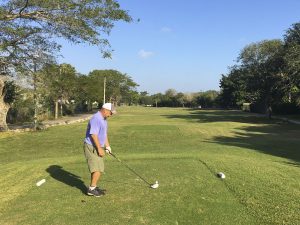 Get up early. Golf as soon as it’s bright enough to find the ball. That’s how we beat the heat today.

I got out of bed at 6. Dave wanted to go golfing at 7. I made coffee and had my yogurt and half a banana and was ready to go by 6:30. We were not the only ones who’d thought of an early tee time today, but we really never had to wait for the two gentlemen ahead of us. 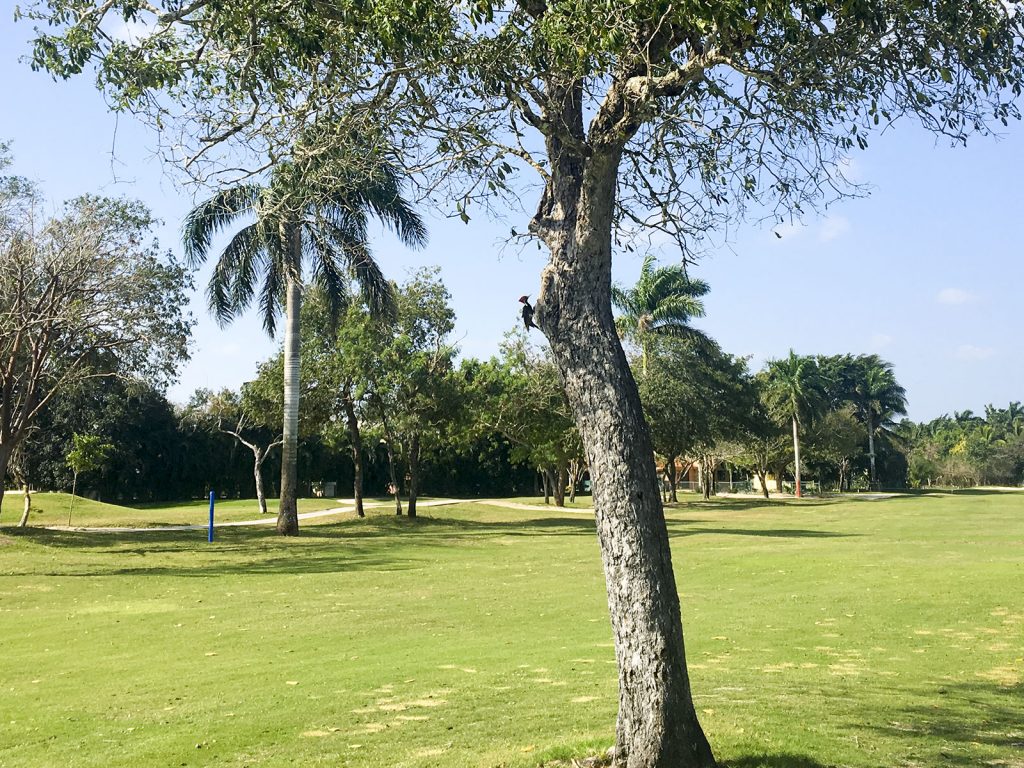 Angry woodpecker on the tree. 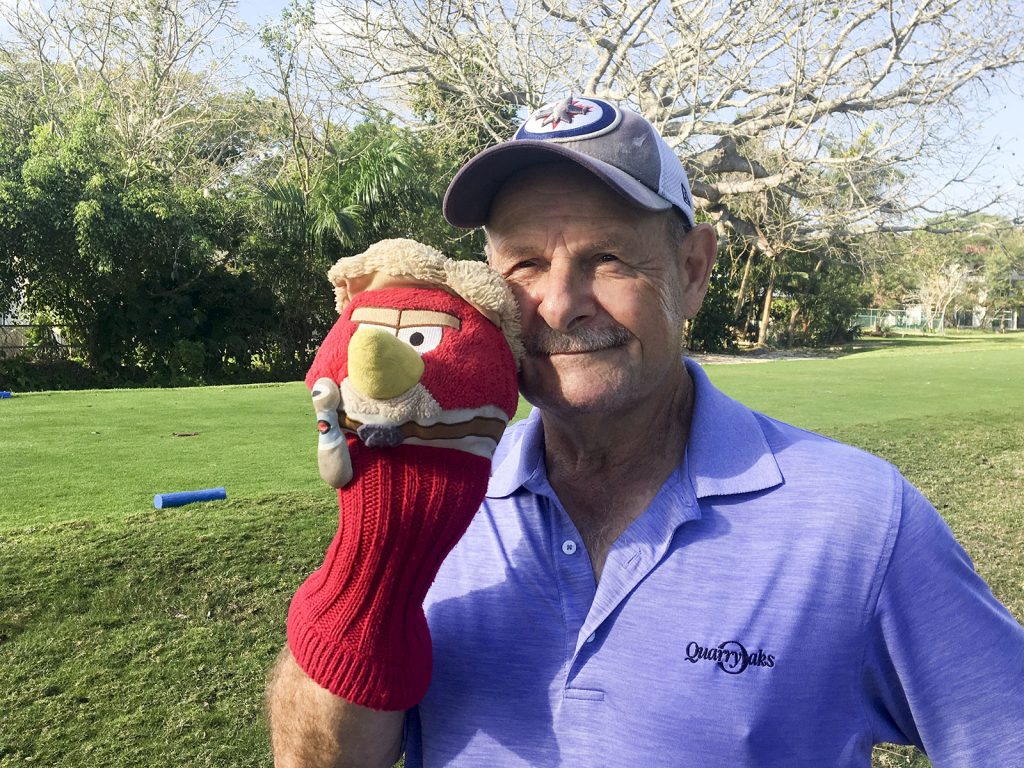 We were at the ninth green when MaryLou texted that Ken and Kaaren had arrived. Ken met us at the first tee, and we golfed the front nine again, since the back nine was closed for maintenance today. By the time we were halfway through the round it was warming up quite a bit. 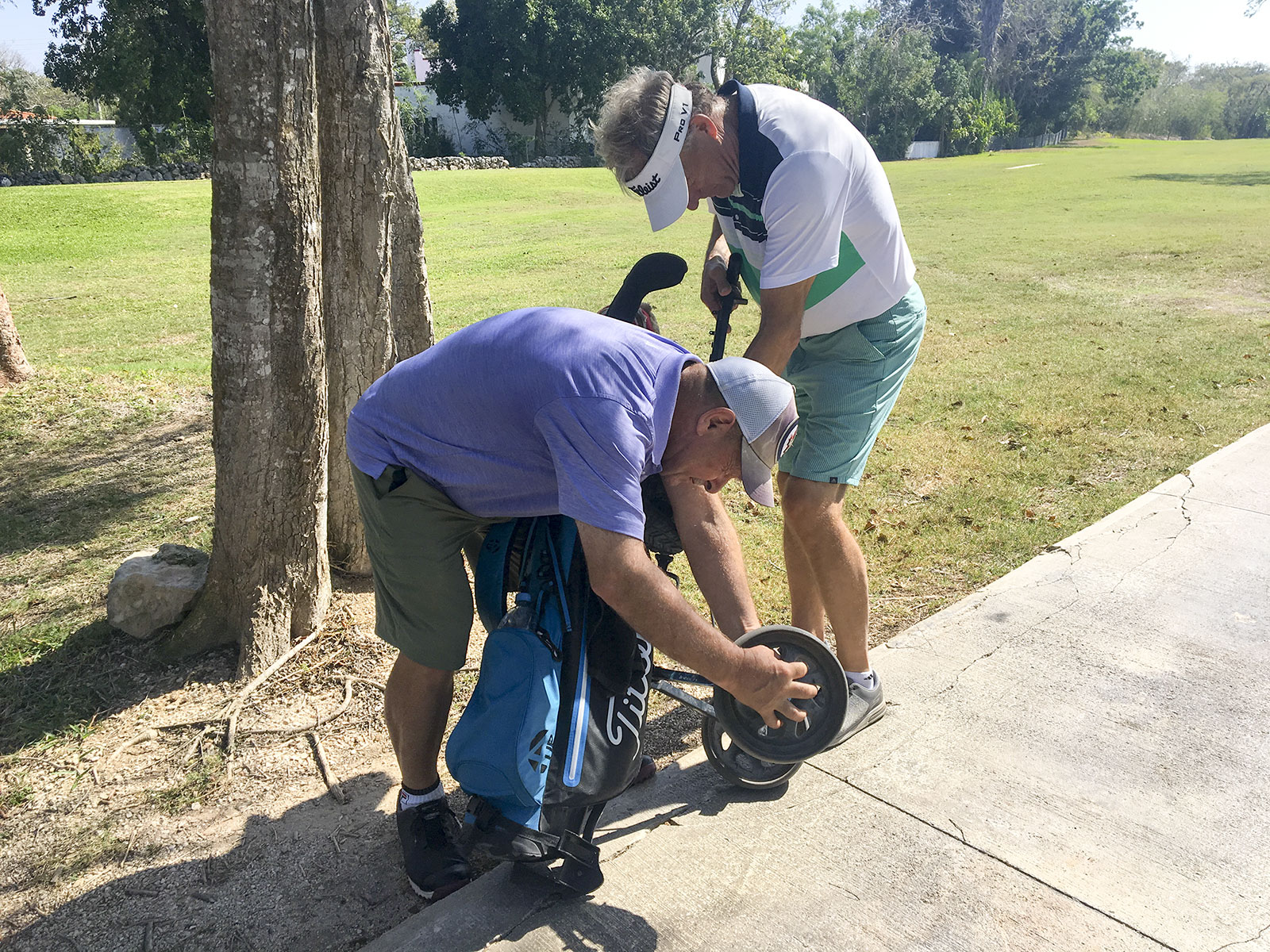 And then the wheels came off Dave’s game — or at least his golf cart!

After the round we had some cold beverages on the patio at the clubhouse. MaryLou and Kaaren joined us. Then we went back to our place and I showered while Dave made caesars for everyone. And that was lunch!

We took two Ubers to the Altabrisa region of Merida where we were all hoping to see an afternoon matinee at the cinema. Ken and Kaaren and I hadn’t seen “If Beale Street Could Talk” so we bought tickets for the 2:00 showing. Dave and MaryLou bought tickets for “Capernaum”, a Lebanese movie that’s nominated for an academy award for best foreign film. They were told that the subtitles would be in English, but after the opening credits everything was in Spanish. They ended up going bowling while the Neufelds and I sat through our movie. Well, after a million previews of upcoming movies, the movie that STARTED playing was “Bohemian Rhapsody”. But the other patron in the theatre (yes, there was only one other person in the lovely big air-conditioned theatre) rushed out and complained and got them to stop the wrong movie and start the right one. Lucky for us! All three of us sat there and looked at mostly close-ups of actors who were working their way through a VERY slow-moving plodding plot.

After the movie we met the Driedgers sitting in the foyer working on a crossword and reading a book. The Neufelds went home, and so did we. First a quick run through the big grocery store to pick up more supplies, and then an Uber home.

By 5:30 we were all back in our spots doing what we do. Dave on a crossword, MaryLou catching up on what she’d missed on Facebook today, and I wrote my journal up until this paragraph.

After supper we tried watching a movie. We started watching the recent documentary about WWI, but lost interest pretty quickly. Dave clicked through our list of new movies. Nothing. MaryLou went upstairs. Dave found the first season of “The Sopranos” and we watched the first episode. Hmmm… Maybe it’s a bit dated? I’m not sure we’ll continue that.

By 9:30 it was time to call it a day. Especially if we get up to go golfing at 7:00 tomorrow morning. Goodnight.