I woke up, looked at the alarm clock. It’s still dark outside. The clock says 4:20am. Hey, I bet the Super Bowl is still on! So I got up and headed into the living room. It took me a few minutes to find a live stream of the game, and a few more minutes to get rid of a couple of large popup banner ads that hid most of the screen, but I managed. What? The Broncos are ahead 16-7? How much time is left? Five minutes left in the third quarter. Well, that’s still plenty of time for the Panthers to make a comeback.

But not against this Denver defense. When it was all said-and-done, the Peyton Manning and the Broncos won Super Bowl 50 by a final score of 24-10. I’m okay with that. I didn’t see the commercials because the ESPN channel I got was from some Spanish station where the game announcers spoke English, but the commercial breaks just showed a street scene in San Fransisco and two Spanish announcers yacked away, waiting for the game to resume.

I managed to find another feed for some of the post-game ceremony and celebrations, but by then it was getting bright outside here, and the morning rush hour was starting. Sue got up and I made coffee. We had breakfast. Sue announced that it would be a ‘hot one’ today. I called the Metropolitan Golf Course and made tee times for our last five Mondays here, to the end of March. Monday is half-price (and busy) at the Met.

After breakfast the Dycks came by and the four of us struck out for today’s activity: a drive around Cape Town on the top deck of a big red double-decker bus. We bought tickets and boarded the bus at next to the Aquarium at the Waterfront. We plugged our little orange earphones into the panels next to our seats and listened as the audio described what we were seeing. It was interesting to learn that much of the ‘prime’ area in the front of the ‘city bowl’ (where we spend most of our time) was actually underwater until the 1930s when they dredged the bay and built the harbour. That is why the street BEHIND our apartment is named ‘Strand’ street — ‘strand’ means ‘beach’ in Afrikaans, and that is where the beach used to be!

The bus tour had about a dozen stops where passengers could get on or off anytime. We got off on the 5th stop, right downtown, near the Greenmarket. It was quite hot sitting up there in the bus with the sun beating down on us — time for a morning refreshment.

We walked from that stop to the next, stopping to wander through the Company Gardens along the way. 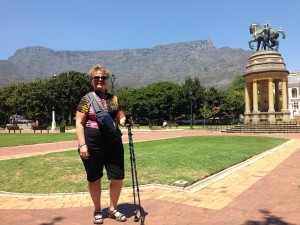 Arlene, in the Company Gardens, with Table Mountain in the background. 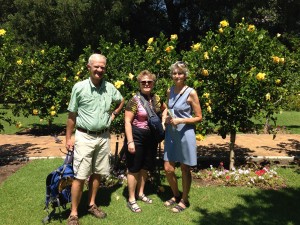 Robert, Arlene, and Sue in the Company Gardens

We eventually ended up on Bree Street and got a table at the Bacon cafe. Lunch stop. Always a highlight. (And as you know, ‘bacon’ makes everything better!)

Then back on the bus. Now it was much too hot to sit on the top deck. The route took us up to where the cable car rides to the top of Table Mountain begin. All four of us had already experienced that ride on previous visits to South Africa and were okay with not going up there today. But we had a 15 minute stop for photos.

The bus ride took us over the ‘shoulder’ of Table Mountain and back down to the coast, through a couple of small ‘suburbs’ of Cape Town: Camps Bay, Clifton, Bantry Bay, and back to Green Point. We got off the bus at ‘our’ lighthouse and walked through the park back to our place. Pitstops at Ultra Liquors and The Butcher Man to pick up supplies for our supper. Then off to our respective homes.

We had a short FaceTime with Alex and Max. We showered and cleaned up a bit. Robert and Arlene came by for happy hour at 5:30. We visited until 7:30 when it was time to barbecue our chicken skewers. Arlene made a salad and Sue made mushroom-filled tortellini. We talked some more. We pretty-much talked about everyone and everything we could think of! By around 10 o’clock we were plum-tuckered out — all that adventure, all that sun, all that beauty, all that talking…

Sue cut up a mango, a pineapple, and some chocolate for our ‘night snack’. A little glass of port to go with it. And then we said goodnight.