Fruit and toast and by 8 o’clock the Dycks were here. We walked down to the V&A Waterfront and got in line for the 9 o’clock ferry to Robben Island. It was plenty windy, and probably even windier once we got out of the harbour. The one-hour ferry ride brought us to the island — and not everyone aboard had the same rosy complexion they started with by the time we disembarked. But WE were all okay.

We filed off the ferry and then walked along the pathway to the big sign at the entrance. We passed through and were led into the prison walls by a former ‘inmate’ of the notorious apartheid prison.

He had us all seated on benches around the perimeter of the former entrance and processing center of the prison, and then began to tell us something of his experiences as an inmate there. He gave us a lot of names of the various black protest group leaders who served time there with him, including Nelson Mandela. He also told us a bit about what life in prison was like for him in the 70s and 80s, before the end of apartheid in 1990. He spoke clearly but unfortunately his heavy accent made it hard to understand all he was saying.

The guide took our group (about 50 of us) through the various prison sections, stopping to give short talks along the way. We even got to walk past the cell where Nelson Mandela stayed for 18 of his 30 years behind bars.

The second hour of our tour was by bus. A guide explained the various points of interest as the bus drove a loop around the island.

And then it was time to get back on the ferry for the ride home. Oh no, now we’re being herded onto a much smaller ferry! And it’s AGAINST wind all the way back to Cape Town! We’d just made ourselves comfortable on the top deck of the boat when a deckhand came to warn us that we would all get very wet up there — lots of splashing water today. Down below we went, again managing to get ourselves a good spot in a ‘booth’ next to a window. We were a bit concerned about Arlene, who didn’t feel at all good about riding the big waves back to the mainland.

Well, we were just getting comfortable again when a guy comes down there and tells us sorry, but we’re all going to have to get off this boat and take the other boat back. What? Okay, we scramble out and head for the next boat. Arlene is hoping it is the same ‘bigger’ ferry that we were on for the journey here, but no, they insist we get on this smaller boat. Which we do. We all manage to find a cushioned seat up on the deck when, what do you know, a guy comes and tells us we are all gonna get wet up here, lots of splashing today. Down we go, but now we are in a window-less hold below, and there are no empty spots on the benches left. Okay, we’ll just squeeze the seated passengers in a bit tighter and FORCE ourselves onto the end of the benches. And we were LUCKY — quite a few re-seated passengers who got on after us had to sit on the floor, on the stairs, or STAND for the one-hour swell-riding trip back! Now there were quite a few MORE green faces. Barf bags are distributed. Some of us smile weakly, glad that lunch is still AHEAD of us. And for the next hour we hang on for the rolling ride back. No windows, just the loud rumble of the diesel engine and the occasional splash of sea water when it comes down the stairwell. 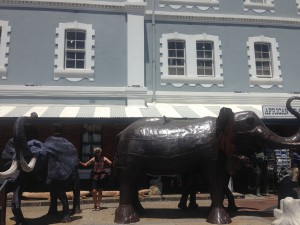 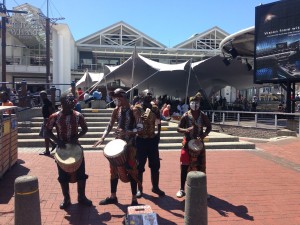 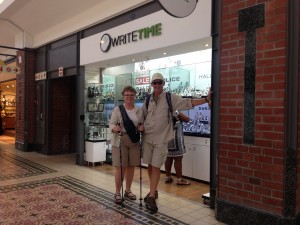 ‘Recharged’ and ready for more!

But we made it, appetites intact. We found a table at an outdoor cafe next to where the buskers were entertaining the Sunday crowd. Good music, good food. Before heading home we made a pitstop at a jewelry store to get a new battery for Arlene’s watch, and another stop at the butcher shop to pick up steaks for our braai tonight.

Back to our respective quarters we went for a quick lie-down before reconvening at our place for happy hour. Around 5 o’clock the Dycks came by. G&Ts and crackers and cheese. We discussed several world issues and then I hooked up the TV to my computer. We looked at a few of the memory cards of photos from Robert and Arlene’s safaris and trip to Victoria Falls.

Now it was time to barbecue the steaks and the potatoes. It didn’t take long and we had a lovely setting before us, with potatoes, steak, salad, and champagne. Delicious.

More after-dinner discussion. By 9:30 we were tired but wait! there’s ice cream! We had some good ice cream with caramel sauce before saying good-night and see you tomorrow morning.

I really wanted to stay up to watch the Superbowl game, which starts at around 3 in the morning — but i don’t think I’ll make it! Too tired too early.