I told Robert and Arlene my post today would be shorter. Maybe all I need is the title?

Sue and I had Saturday morning bacon and eggs. Robert and Arlene came by at 10 and we all headed out for a morning walk. Out to the lighthouse and then along the coastline back to the V&A. Sure are lots of people out on this weekend! With a light cloud cover and a gentle ocean breeze the conditions were about as good as we’ve had today. We went to the ticket booth and bought tickets to the ferry ride and visit to Robben Island for tomorrow at 9am. That done, we headed back home for lunch. Sue and Robert made a pitstop at Giovanni’s for bread and meat and we all had lunch at our place.

After lunch the Dycks went to back to their place for a nap and we read (I bought the Saturday paper from Benjamin, down on our street). At around 5pm we gathered again, this time for happy hour. We FaceTimed with our kids, then the Dycks did the same with theirs.

Just before 7 we headed out for supper — went to Mano’s, just down the road a bit. We got a table outside — the ‘big rush’ would come in an hour or two. We had a fine supper while watching people (and many expensive cars) go by. Main Road had lots of action today. Even a pretty good crack=up right across the road in front of us! 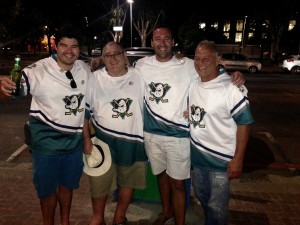 We’d noticed a guest wearing a ‘Mighty Ducks’ hockey jersey in the restaurant — and later in the evening he was joined by several more similarly attired ‘hockey fans’. That’s just a bit too weird — most people here know NOTHING of hockey! In fact they think of ‘field’ hockey, not ‘ice’ hockey, when we tell them that there’s no rugby, only hockey, back in Canada. So we asked these boys what’s up with the hockey sweaters? And they were happy to tell us they were not ‘hockey’ sweaters; rather, they were all former rugby players who no longer PLAYED rugby, but now remained part of the team by being MANAGERS — and they had the properly labelled jerseys to prove it. We told them we were from Canada, and hockey was our sport. They were only too pleased to pose for us and then enthusiastically encouraged us to ‘hang around’ at the restaurant, that later tonight there would be quite a party there!

Old folks like us are happy to go for a bit of an early supper and linger over our table and watch the beautiful people go by on the street — but we are not really all that interested in staying up late (9:30) just to see a bunch of drunk and rowdy ex-rugby players whoop it up on a Saturday night. Thanks, but we’ve got to ‘get up early tomorrow’. Good-night.