And when he had finished speaking, he said to Simon, ‘Put out into the deep and let down your nets for a catch.’ And Simon answered, ‘Master, we toiled all night and took nothing! But at your word I will let down the nets.’ And when they had done this, they enclosed a large number of [golf balls], and their nets were breaking. Luke 5:4-6

Another day in paradise. We keep waiting for the big heat to make it too hot to golf, but every day so far has been perfect. So we continue to go out and walk 18 holes of golf.

Because of the early night yesterday, when all the naughty kittens went to bed early without their internet, we were up early by our standards today. I went downstairs before 7 and was surprised to NOT see MaryLou sitting at the table working on her computer. But by the time Dave and I had poured our first cup of coffee she was back from the golf course restaurant; the restaurant only opens at 7, but she’d managed to publish her blog post using the club’s internet from out on the patio. I suspected that our internet failure was related to the date — so I ‘WhatsApp-ed” Mario (the guy from whom we rent our place) and asked if perhaps he had ‘forgotten’ to pay the internet bill. And by the time Ken and Dave and I had finished the first nine holes I had a reply: Yes, the internet would be available again within 10 minutes.

So while Kaaren and MaryLou puzzled, the boys were working our way around the course. (And yes, it IS work — by the time we finish walking 18 holes we are exhausted and hot and tired and ready for a cold Modelo Especial on the patio.)

The fairways on the course are plenty wide, and it’s rare that an errant drive goes into someone’s backyard or hits a house. But there are plenty of hazards to lose your ball in — sand traps and ponds strategically placed halfway down the fairway where your drive might end up (like the eleventh hole), or protecting the greens. The par 3 seventeen is probably the hole that has claimed the most balls from us — partly because the scorecard says the pin is 160 yards from the tee, and we seemingly can’t reach it even when we hit 190 yards! I carded a 6 there yesterday, and a 7 today! The water is barely a foot deep, but the base of the pond is quicksand! Often I can’t even see the ball by the time I get to the pond — it’s disappeared in the quicksand. And if I DO see it and try to fish it out with my ball retriever,  I risk bumping the ball before I can scoop it, and then it’s for sure gone! You’d think that we must be spending a fortune buying more balls by now, but not so. As we make our way around the course we are approached by the greenskeepers who work here, offering us “bolsa de bolas” (a bag of balls) — a dozen for 100 pesos. Not bad. About 50 cents per ball — and some of those balls likely are ones you yourself lost in the pond! 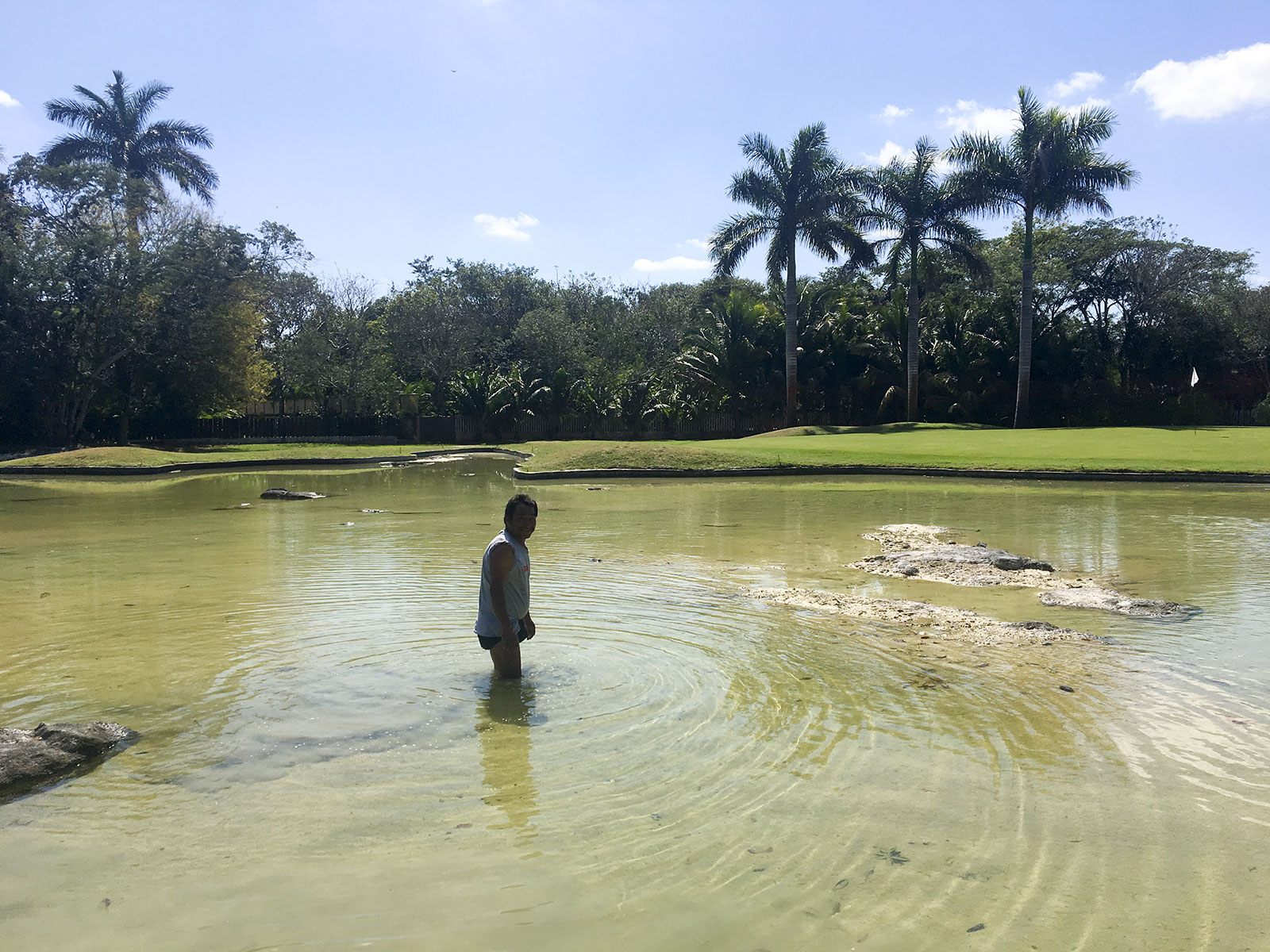 Fishing for balls near the 17th green.

We had lunch on the patio after our game. (Ceviche for me.) Then Ken and Kaaren hightailed it home — they are expecting guests from Winnipeg to arrive later this afternoon. I showered and had a bit of a nap.

I went downstairs at around 5:00 and Dave and I watched the last two episodes of Narcos Mexico. MaryLou came back from the gym just in time to see another shootout on the TV. I tried to order pizza online when the show was over, but after carefully filling out the online form the Domino’s website reported a ‘temporary’ error — please try again later. Well, it was late enough already! So I called the number and ordered in English from a Spanish order-taker. I wasn’t quite sure what she was asking, but at various times I told her what I wanted to order, my nombre (name), my direcciÃ³n (address), and my nÃºmero de teléfono. And sure enough, 25 minutes later the motorcycle pulled up at our door and delivered what I had ordered.

After supper Dave and MaryLou watched a movie on TV. I had seen it before, so I disappeared upstairs and diddled around with my wordpress plugin that I seemingly can’t figure out how to program. It was midnight by the time I had given up on that project for another day, and had listened to the fireworks outside my open patio door, and had written this LONG post about nothing! And THAT is what I did on the first day of February here in Merida.