Against whom do ye sport yourselves? against whom make ye a wide mouth, and draw out the tongue? Isaiah 57:4 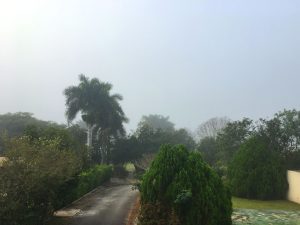 When I got up this morning it was foggy outside. Birds were chirping and singing as they played in the trees and bushes outside my patio. Hummingbirds were zipping from flower to flower in the bushes across the road from me. According to my grade six teacher, fog in the morning meant it would be warm in the afternoon. Hot and humid is what it turned out to be.

We were going to go to the little deli cafe at the end of our driveway for breakfast this morning. We had just started walking when our neighbour Pepe came by. He offered to give us a lift. When we told him our plans he poo-pooed the idea and told us we should rather go to the restaurant at the gym he goes to every day. It was across the road and about a kilometre down the highway.

Breakfast at the gym wasn’t as good as it had been at the Los Benes restaurant we went to last week, but it was okay. When we were done we walked across the highway and started for home. I stopped at the OXXO convenience store and topped up my phone card — $20 and I’m good for another month! Lots of data and unlimited calling and texting in North America.

We stopped at that little deli on our way home, just to confirm that it really wasn’t a good breakfast place. Hmmm… Looked like a nice little French ’boutique’. Quiche, assorted coffees, cheeses … and the woman behind the counter spoke English. Maybe next time.

Back at the house we finally turned on our air conditioner. While MaryLou hid upstairs in her room, Dave and I took turns napping in front of the big TV while Rickie Fowler tried to hang on to his lead in the third round of the Phoenix Open.

At around 4:30 I showered and got ready for the evening. Dave booked an Uber to take us to the Neufelds’ place in Merida where we would have supper. Along the way we asked our driver (a woman, a first for us) to stop at a wine store so we could pick up a bottle to bring to the dinner. She did a U-turn and pulled up in front of a big grocery store. Dave and I ran in and got supplies while MaryLou and our driver showed each other photos of their families on their iPhones.

We got to the Neufelds’ a bit before six o’clock. We joined Dave and Debbie, their guests from Winnipeg who are staying with them for the next week and a half, and soon were seated around the large round table in the patio next to the pool. Kaaren had made pasta and salad and we had a nice visit. 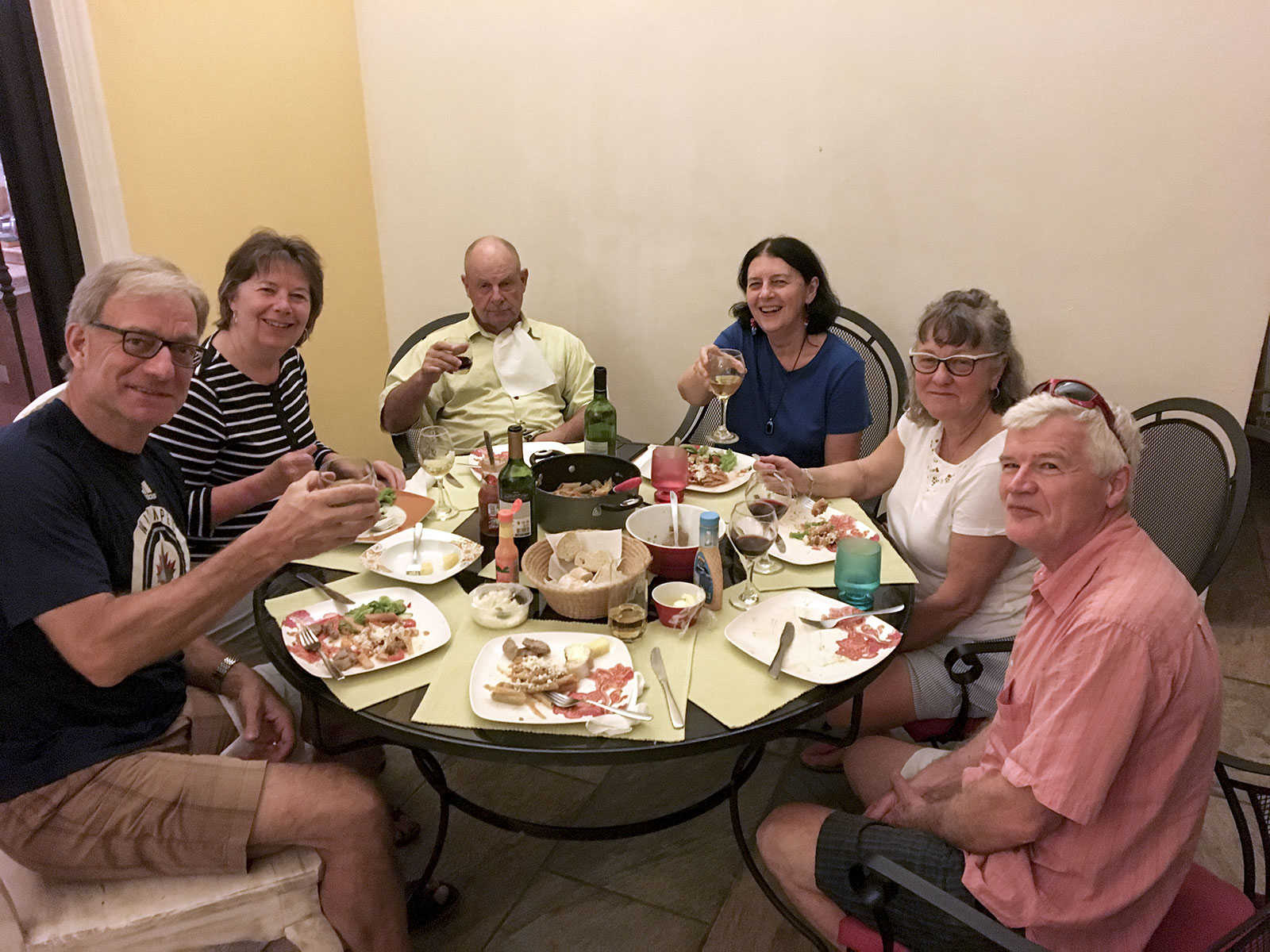 By seven o’clock it was time to make our way to the big plaza in the centre of town. We’d been told that there would be an exhibition of the ancient Mayan ball game, called Pok-A-Tok, and we should be there early to get a good seat. The plaza was a 15-minute walk from the Neufelds’ house. Bleachers had been put up in front of the big church in the square and the roads had been cordoned off. We clambored up the bleachers and sat down. It looked to be an event for tourists; Ken’s Winnipeg Jets t-shirt was recognized and acknowledged by English-speaking spectators around us. 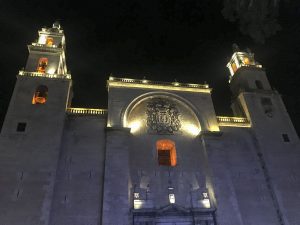 While Merida officials set up barricades which would define the field of play, a mariachi band across the road was serenading a bride and groom and their wedding guests as they made their way out of the cathedral where they had just been married. What a mix of cultures. Christians and heathens sharing the same space. Spanish trumpets and Mayan flutes and drums competing for the attention of the visitors.

Well, not surprisingly, the Pok-A-Tok game did NOT start at 8:00pm. No, here in Mexico one must learn to be patient. MaÃ±ana. When the wedding party finally left, and the heavy rubber ‘game ball’ had been passed around in the crowd, the ‘opening ceremonies’ began. A dressed up old man lit a special fire in the middle of the street and held it up to each of the four corners of the world while a lady ‘essplained’ things over the microphone. A row of maracas and another of conch shells lined the street. Finally, after much formality, the players ran into the square. Four were painted up in blue, the other four in red. Dave said it was shirts vs skins, but no shirts here. 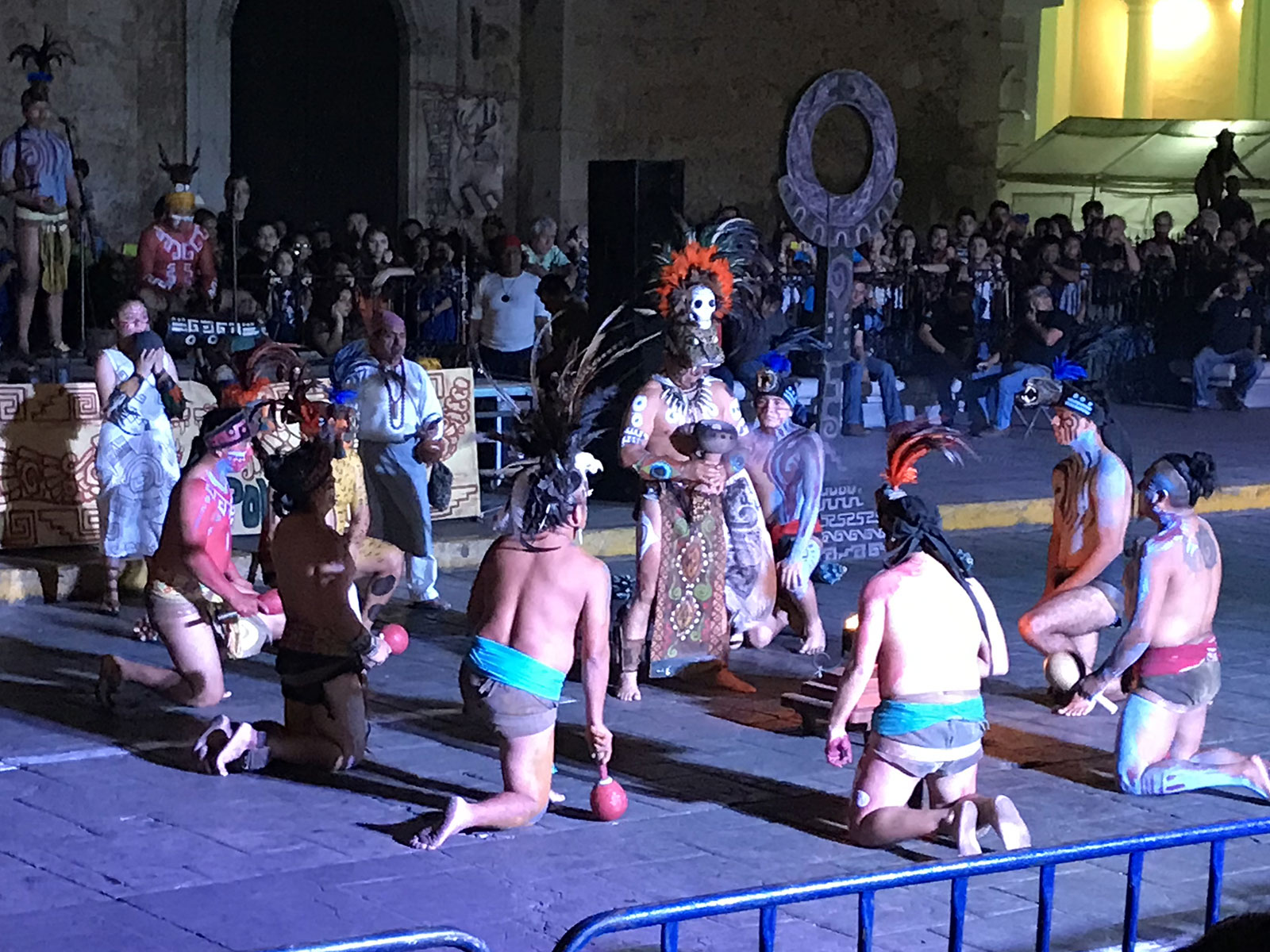 A big pole with a hoop thing on top was set up in the centre of the square. Then the player, using only their hips to strike the heavy rubber ball, volleyed the ball back and forth, scoring a point if they got the ball through the hoop at the top of the pole. It is said that in ancient Mayan times the winners (the losers?) literally lost their heads playing this game, as a sacrifice to the gods. Well, we’d already witnessed enough blood and gore at the bullfight — never mind the beginning, middle, and end of each Narcos episode — so thankfully tonight’s game ended with a pyrotechnic display where they lit the ball on fire and then ‘volleyed’ the ball around like they do in volleyball warmups. And that was that!

As the crowd dispersed the surrounding streets were filled with people. Many streets were closed to traffic so it was a bit of a challenge for the Uber driver whom Dave had summoned to find us next to the Burger King. Our driver actually spoke pretty good English, an anomally here. And as we drove the half hour ride back to our place he told us about how he and his sister had been on the cover of Forbes magazine, how the cartel in Mexico City had caused him to lose everything because of his ‘fame’, how he was rebuilding his construction company here in Merida and all he needed was some good investors, and that he was also “a healer”! Yes, he was an instructor in the arts of reiki and reflexology and various other new age treatments. When we got to our little superette we made our escape.

The heat and the excitement of the day left me in no shape to blog before going to bed. The batteries in the remote control for air conditioner in my bedroom were dead so I opened the patio door and turned the ceiling fan up a speed or two and went to sleep.