We were just having breakfast and about to click on the “Book It” button on a GolfNow tee time when our cell phone rang. JP on the phone. What’s on your agenda? How about we take a little road trip up to Big Bear, the ski-resort snow-capped mountain we can see to the northeast of us here in Palm Desert. I’m in. Sue will have to amuse herself without the pleasure of my company today.

Around 10am Jim was here to pick me up. Google maps, open on his ipad, showed 3 routes as options for us. So we decided to take the western zigzag route up from San Bernardino, circle the Big Bear Lake at the top, and then return by another route down to Hwy 10. So that’s what we did. 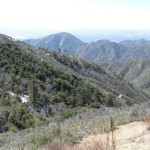 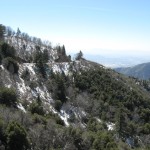 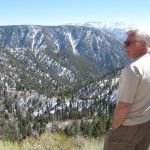 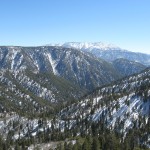 After climbing for nearly an hour, stopping for an occasional photo as we left the hot desert for the snowy mountains, it was time to stop for lunch. All that climbing makes a guy mighty hungry. So we pulled in at a little cafe called Blanco and Pierre’s in Boulder Bay. Cheeseburger for JP, patty melt for Rudy. Yum. As we left the restaurant an older gentleman wearing a ‘Citizens Patrol” sheriff uniform said hello and started up a friendly conversation as he was getting into his patrol jeep. So I asked him if he knew where we might see a burned down cabin. What? Oh, I know what you mean. Yeah, that’s way down the hill. Just follow the #38 and turn down Glass Road — it’s right down at the end of Glass Road. So we’re driving out through Black Bear City, lots of cabins but most of them empty (off-season?), and then going way up again (8000 ft), and winding around and then down some. And as we’re talking JP spots a road sign at an intersection — Glass Road. So we turn off and start winding our way WAY down. No cottages or chalets here. Just keep going down into the valley. Get to a T intersection. Now what? I was thinking we should probably just turn around and head back, but JP makes a left turn and about 1/4 mile down the road there it is. The charred remains of the cabin in which Christopher Dormer, the angry L.A cop who went on a killing rampage here in mid-February, met his end. After a shoot-out in which another sheriff’s detective was killed, the stand-off ended when the cabin in which Dormer was holed up in caught fire after police shot tear gas canisters into it. There was a fence around the site, a sign thanking the police across the road, and a U.S flag at half-mast next to the brick chimney of the cabin remains. 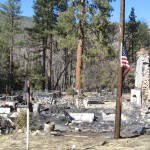 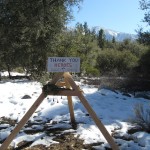 That was about as exciting as it got for a couple of old ambulance chasers from Steinbach. We continued our return trip. Once we were back on Hwy 10, heading east, we again drove through the San Gorgonio Pass Wind Farm, just outside of Palm Springs. Apparently the San Gorgonio Pass is one of the windiest places in Southern California — making it a great place to plant between three and four thousand windmills. 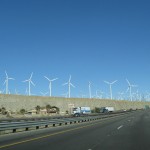 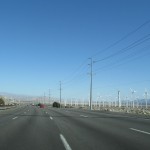 We got back to our house at around 4:30. It was a fun day — and I’m already looking forward to another adventure with Jim tomorrow!

Sue had just returned from an afternoon at the pool. We had happy hour and talked about our day. Watched the evening news. Watched our comedy shows. Watched a special on PBS about the women’s movement. Went to bed at 11.