Because we went to sleep so early yesterday we woke up so early this morning. Couldn’t sleep after 5am and finally got out of bed by 6. Sue made coffee. I spent some time on the computer.
After breakfast Sue went outside and read. She finished her book, “Ten Degrees of Reckoning”, and half-finished “Prisoner in Tehran”. She did a load of laundry but really that’s about all she did. And I spent the day on my Mac. Did a bit of work but mostly just fooled around. I got on my bike and went across the road to Von’s to pick up my Redbox movie. Sue made supper — grilled fish. I couldn’t get the DVD to work on the big TV, but after a bit of searching I found another DVD player and hooked that one up — and it worked. So, after supper, and after I phoned my mom and dad (it’s VERY comfortable in Manitoba, at least INSIDE, because the big storm outside isn’t so bad even though nobody’s driving, and at least it’s nothing like the big train accident in Japan, and why don’t you come home and shovel, don’t be so lazy…), we sat down and watched our movie. “The Master” was the one ‘big’ film that had at least 3 major academy award nominations (but didn’t win any) which we hadn’t seen. So when it became available for rent I thought we should check it out. Hmmmm… weird movie. Don’t get it, really. And how can THAT movie be considered for academy awards? We worked so hard to stay awake through it but it really wasn’t worth it. FINALLY, at 10:30, it was over and we could go to bed! Oh well, tomorrow is another day.
Here are a few photos of our place — which Sue took with her iPad mini: 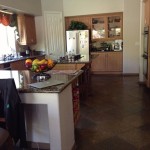 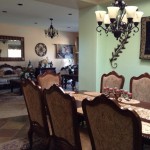 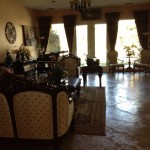 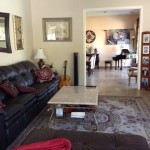 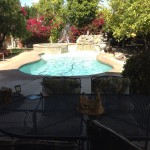