Woke up at 6. Rolled out of bed at 7. Made coffee. Checked email. Read the news. Had bacon and eggs for breakfast.

Sue cleaned the fridge and started ‘organizing’ the kitchen, getting ready for Monday’s departure. I watched some golf on TV and fussed around the house. Then Suzy Homemaker started REALLY cleaning up — and I had no choice but to get caught up in the tornado. Cleaning bathrooms, cleaning outdoor furniture, disassembling bikes so they’re ready to load into the van, sorting through closets, cleaning up the garage. Whew! (What are we going to do tomorrow?)

After lunch we got ourselves ready for an afternoon of golf. We drove across the road to the Gold Canyon Resort — had a tee time for 1:36 at Sidewinder. As soon as I’d paid the starter offered that we could start right away — just the two of us. Well, now we didn’t even have any time on the driving range, but how could we say no. It looked like we’d have a great afternoon, the course to ourselves! 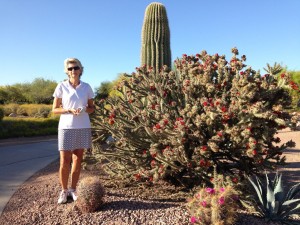 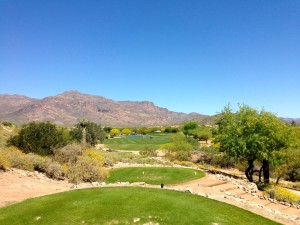 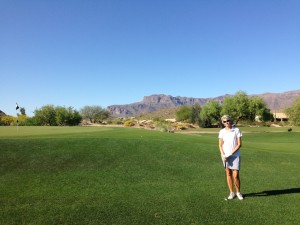 How wrong! The group ahead was slow because the group ahead of them was slow. The marshall came around and warned us: this would be a very long and frustrating afternoon. Oh no! Well, how bad could it be? The sun was shining, a gentle breeze was blowing, the scenery was spectacular. What’s to complain about?

But it got worse. A couple of times on the front nine the marshall came and offered that we might want to jump to hole 11 or 12 — because there were 5 groups, all of them incredibly slow, ahead of us. But we declined.

Suffice to say that today’s “game” took just over FIVE HOURS. And I won’t say what our score was because Sue said I didn’t have to. So I won’t.

Back at our house, we had our happy hour — chips and salsa, G&Ts — sat outside and looked at the sunset changing the color of Superstition Mountain. It almost took away the sting of today’s round. But not quite.

Wouldn’t you know it, our internet is down. Now what? The final few Netflix movies I had on “My List” will just stay there. I guess we could watch Curling, or an NHL hockey game, or worse, a ‘final four’ basketball game, or — hey isn’t that Lloyd Robertson? I thought he was dead! Is this an old W5 or is that show still being made? Let’s watch it.

Supper was a ‘concoction’ of leftover stuff from the fridge that Sue declared included wieners, although I was hard-pressed to find them in all those onions and peppers mixed in with the pork and beans… Really? Really?

We tuned in a replay of this afternoon’s golf tournament on TV. The fridge is more or less empty. The kitchen counters are lined up with jars and appliances that will need to find a place in the van for the ride home. It looks like we’re having an “estate sale” here. Sue and I took turns drifting off. At around 10:30 I had some chocolate pudding with ice cream. An hour later we’d decided that we’d pretended to be watching TV long enough — time for bed.