Scrambled eggs for breakfast again! What have I been doing right? 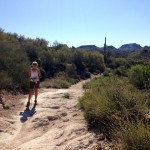 Rick and Irene, our neighbours across the road, are leaving today. I said goodbye this morning and arranged to push their trash bin back to the garage after today. Then it was time to get our hiking boots on and head out for our morning’s adventure. One of the guys I golfed with yesterday mentioned an interesting hike he’d done in the morning, out in the Superstition Wilderness. I forgot the name of the trail he’d followed, but I looked some of the trails up online today and decided we’d tackle the Second Water Trail. It was rated as a ‘moderate’ 7.2 mile hike on one of the websites. That should be manageable. 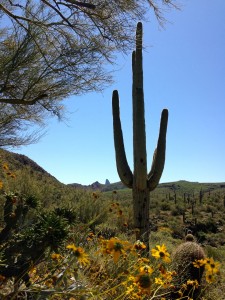 We drove out to just north of Lost Dutchman State Park entrance, and then followed a gravel road for about 2 and a half miles to a small parking lot at the First Water Trailhead. We parked the van, took a bottle of water and a walking stick, and set out on the trail. The trail started out quite wide and flat — an easy walk. But it soon got a bit more rugged as it narrowed and twisted its way across a wash and then up a short, rugged climb through a canyon that led into Garden Valley. The vegetation included teddy bear cholla, ocotillo and barrel cactus. 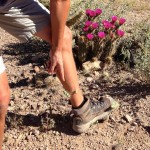 In fact, I got a bit too close to those jumping cholla — and we had to stop for a while and carefully poke away at them with the walking stick to keep the needles from working their way deeper into my leg. But that’s about as exciting as it got on this walk — we saw birds, squirrels, gophers, and lots of lizards, but we did not see the coyotes or the rattlesnakes we were looking for. (Okay, we HEARD lots of rattlesnakes, but whenever we stopped to look for them in the bushes beside the trail all we saw were gophers and lizards.) We passed a couple of hikers, but otherwise were on our own all the way to the floor of Boulder Canyon. At points along the walk we saw the famous Four Peaks to the northeast, and Weaver’s Needle (we’d hiked the Peralta Trail with Dave and Marylou earlier this year, and got a better view of Weaver’s Needle on that hike) poking a hole in the horizon to the southeast. 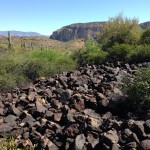 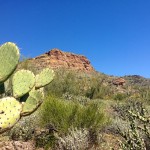 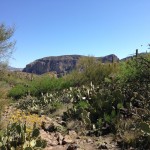 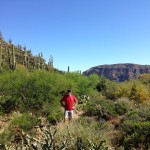 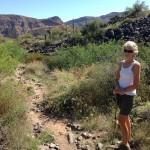 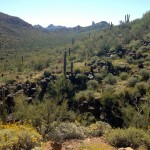 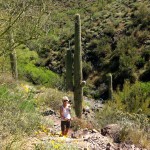 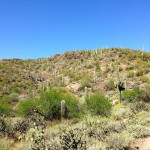 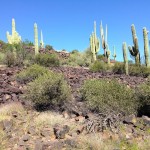 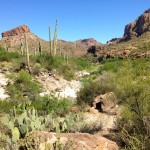 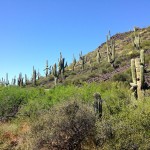 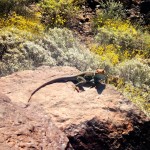 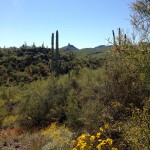 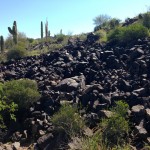 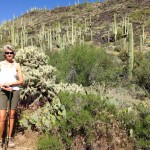 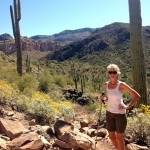 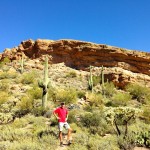 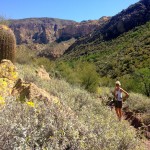 It took us nearly 2 hours to hike the 6.4kms to the floor of Boulder Canyon. The trail was longer, more up-and-down, and narrower than we expected. The temperature was 32 degrees, but felt a bit cooler when we got a breeze near the top of the hills, and quite a bit hotter when we were down in the black rocks in the valleys. Our one bottle of water was nearly empty, and we had to climb back up the way we came! Maybe we’d bitten off more than we could handle? 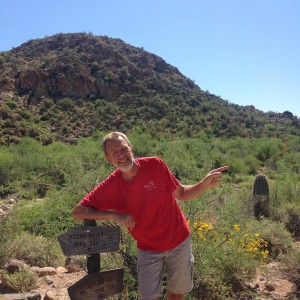 But we made it. Fewer photo stops on the way back resulted in a 1.5 hour return hike to the parking lot. We were HOT, thirsty, and tired when we got into the bake oven that was our ride home.

Major rehydration and showers when we got home. Sue made lunch. We turned on the TV to the golf channel.

Sue read for a while. She did two loads of laundry and then cycled to the bank to close our account. So that’s the end of our debit card — it’ll be U.S. dollars for the rest of this ‘trip’. Meanwhile, I got my Oak Leaf hat on and drove the van to Mountain Brook. Gotta get another 9-holes in, even if my feet are killing me.

I’m on right away. Playing yellow ball vs white ball again. This is great! No waiting. It’s still mighty hot, but I can get used to this. My drives are mostly long and straight. If only my putting…

By the time I’m at the ninth tee the new golf pro (Alex) has caught up with me. So now I get a ‘free’ playing lesson. We spend extra time on the tees, extra time in the bunker, extra balls on the fringe and on the green. Alex is very helpful (and he’s a great golfer — he shot par on the front nine, even as he was demonstrating how to draw and how to fade an iron shot!).

When I got home (my yellow ball shot a 41) Sue was sitting outside, having a glass of wine. Then we had a Facetime call with the kids — had to show Max how ‘Opa’ got attacked by another jumping cholla cactus! All good. We got Tim’s computer all fixed up, too.

Then it was time to head across the road to the Kokopelli Restaurant — it’s ‘Friday Night Pizza’ one last time on the patio. The sunset was almost done for the day — just a bit of orange and navy out in the west. But the blues guitarist was still playing, the bartender was still pouring, and the pizza was just what we needed after a long hot day of walking, walking walking. We were back at our stations in front of the TV by 8:45, tired and happy. Two days left here in paradise.