I woke up at 4:30 and thought it was time to get up — but perseverance paid off and I was able to drift back into la-la land until 9:30 when Sue finally got up to make coffee. It’s pretty good in our place — not cold, very comfortable. Our couch and chairs are good, the bed is great, and it’s surprisingly quiet. We thought that having a bedroom overlooking the street would maybe be a problem, but so far everything is great!

We frittered away a good part of the morning. I went to the bakery to pick up breakfast pastries. We listened to music on the stereo and Sue read while I computed. Around 1pm I went out to pick up a sandwich which I brought back to the apartment. Sue had her leftover pasta from the other night. It was a bit warmer and quite sunny outside — so we scheduled a walk for late afternoon.

I called my mom and dad just after 4pm — that would make it just after 9am at home, so at least I wouldn’t be interrupting the funeral announcements on the radio. They were fine, happy for the call, and yes, they had already listened to this morning’s funeral announcements, and no, they hadn’t heard their own names announced yet so that must mean they were okay. Dad asked me if we were in Paris, and did everyone only speak French or could we get by with English. Mom didn’t let me down either — when I told her that Sue and I had gone for a long yesterday and were planning on going for another walk right after the phone call, she said, “Well! Walking you can do in Steinbach too!” 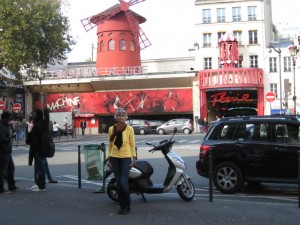 After the call we high-tailed it out. We couldn’t just sit inside all day! We were halfway to the Moulin Rouge, the famous ‘red mill’ cabaret, when we realized I had forgotten my map back at the apartment. Oh well, we wouldn’t go far enough to get lost. Not that you couldn’t get lost here — the strip clubs and sex shops that lined both sides of the street could get a guy off the track in a hurry! But Sue kept me on the straight and narrow, and guided me right past the distractions. It was still bright outside, only 4 o’clock — I bet this place looks quite a bit scarier later on a Friday night! 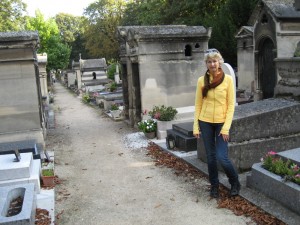 Well, properly inspired by my parents’ enthusiasm about the funeral announcements, Sue and I decided to get off the main drag and visit a cemetery. The Montmartre Cemetery isn’t the Paris’s most famous, and although we walked right around the outer walk of the 25 acre cemetery, we didn’t actually see the grave of anyone we might have heard of before. But it was quiet and shaded and there were quite a few very interesting tombs and tombstones. And it was a nice ‘teet-fedreef’ (as they say in France). We considered whether the Nikkel family should ever invest in such an elaborate monument — many of the stone vaults here had stained-glass windows, iron grating, decorative doors, and fat little cherubs watching over it all. Hmmm… maybe not.

It was quite nice in the graveyard, but you wouldn’t want to spend ALL afternoon there (never mind eternity!) so we made our way back to our place, stopping along the way at a little wine shop. Sue bought a couple of bottles and then we asked the cashier for some dining advice. He wrote down the names of 3 nearby restaurants that he could recommend. We went back to the apartment and had ‘happy hour’ while we watched parts 2 and 3 of our ‘Visit to Paris’ video series we started last night. The parts that we didn’t snooze through were pretty good.

At 8pm we headed out around the corner to an Indian restaurant for supper. It was okay. Not too spicy, and the big stain that Sue got on her jacket sleeve washed out easily enough. Lots of people eat out here (and lots of them smoke too) — and by the time we ambled back home most of the outdoor tables were full. Not just at the Indian restaurant, but at all of the ones we passed along the way.

Back home we changed into our ‘lounging’ clothes and opened a bottle of wine. Sue watched some crappy CNN on tv and I sent some emails and updated the blog. By midnight it was probably too late to watch another movie, although I was feeling dangerously awake. If we don’t go to bed soon, we’ll probably be up all night! Au revior, or however you say that.