Saturday, I woke up at 10:30. Made coffee. Sue joined me at 11. I went to the bakery for bread to go with the scrambled eggs Sue made for breakfast. No bacon — Sue is on a diet. We finished watching the french movie we couldn’t stay up for last night — “La Vie Moderne” — which ended as badly as it began. I’d say it was a waste of time, but really, we have all the time in the world. We listened to music and read. I updated the ipad’s system software to iOS7, which was WAY more exciting for me than for Sue. Then at around 3pm we skyped with the kids. Mixed results. The good thing was that when Max heard and then saw us, he got a HUGE smile on his face and hurried to see us on the screen. The bad thing was that he really wanted to get through that little window and play with us, and quickly got frustrated. But it was great to see him and Tim and Alex — and to know that everything at home is going well. Although not so well for the Bombers, I see — let’s hope that things go a bit better for the Giants and Vikings tomorrow afternoon. 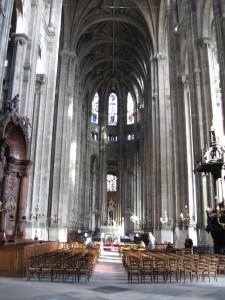 After the skype we headed out for the day’s walk. Today we went down Rue de Martyrs down to the ÃŽle de la Cité (an island in the Seine). Our destination was the Notre Dame Cathedral. The day was sunny and warm. Lots of people out too. Cool shops along the street, and the small outdoor cafes and bars were all packed. We got close to the Seine and stopped to look inside another big old church on our side of the river — St. Eustache. It was big and old and beautiful — but then what isn’t old and beautiful around here? 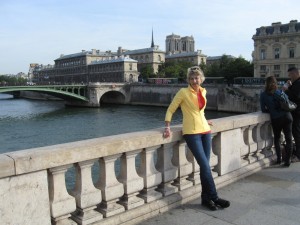 We continued on across the Pont Neuf bridge and soon arrived at the big cathedral. Hmmm… seems we’re not the only ones that thought today would be a good day to visit this tourist site! The line-up to get in went snaking around the front area of the church and then out across the street and around the block! Well, we’re here for a month, and a couple of pilgrims like us can easily come back another day for a look at the INSIDE of the church. We’ll just take a few photos of the majestic front of the building and then maybe wander around to the little park at the back, and then head back across the river and make our way back to the apartment. (Check out my photos) 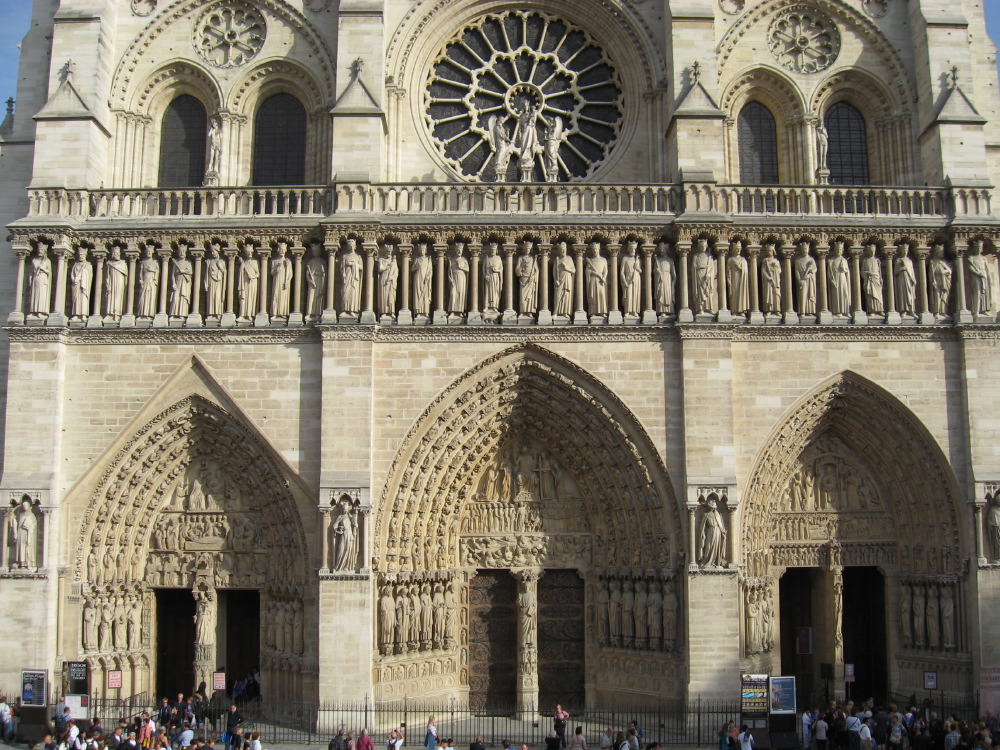 Under the balustrade, there is a wide horizontal frieze, the gallery of kings, a row of twenty-eight statues representing twenty-eight generations of kings of Judah, descendants of Jesse and human ancestors of Mary and Jesus.

The faÃ§ade is an imposing, simple and harmonious mass whose strength and sombre grandeur is based on interplay between vertical and horizontal lines. At the centre of the faÃ§ade is a large rose forming a halo above a statue of the Virgin with Child between two angels. 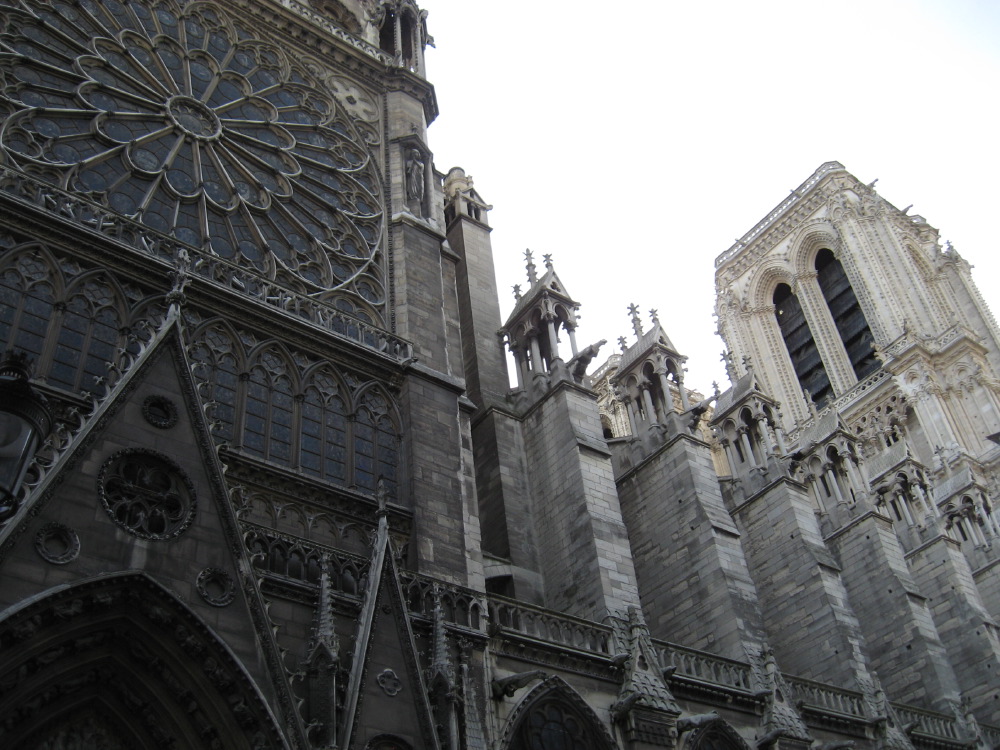 Another rose window on the side of the church. 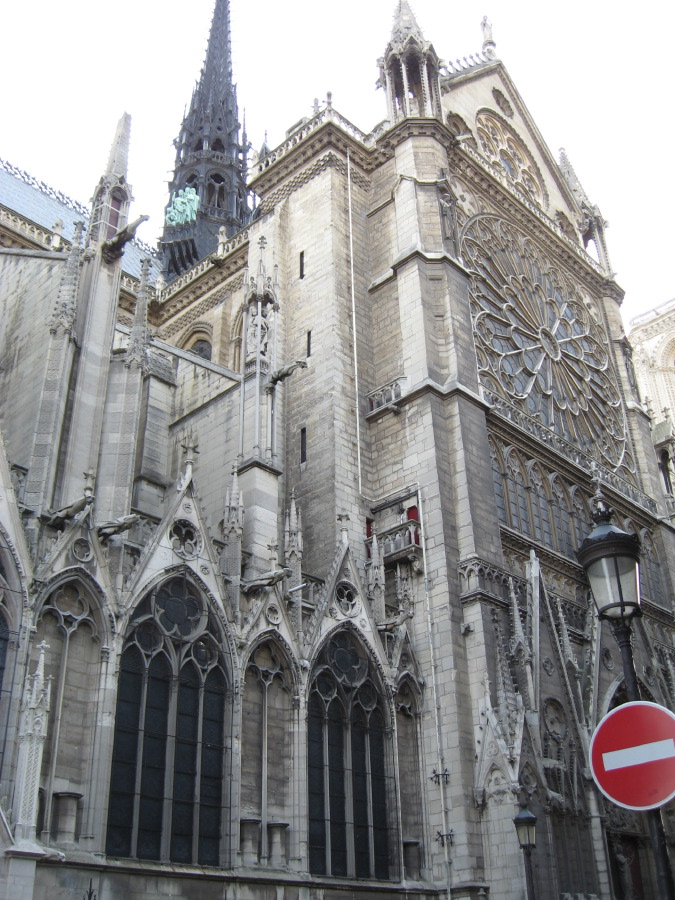 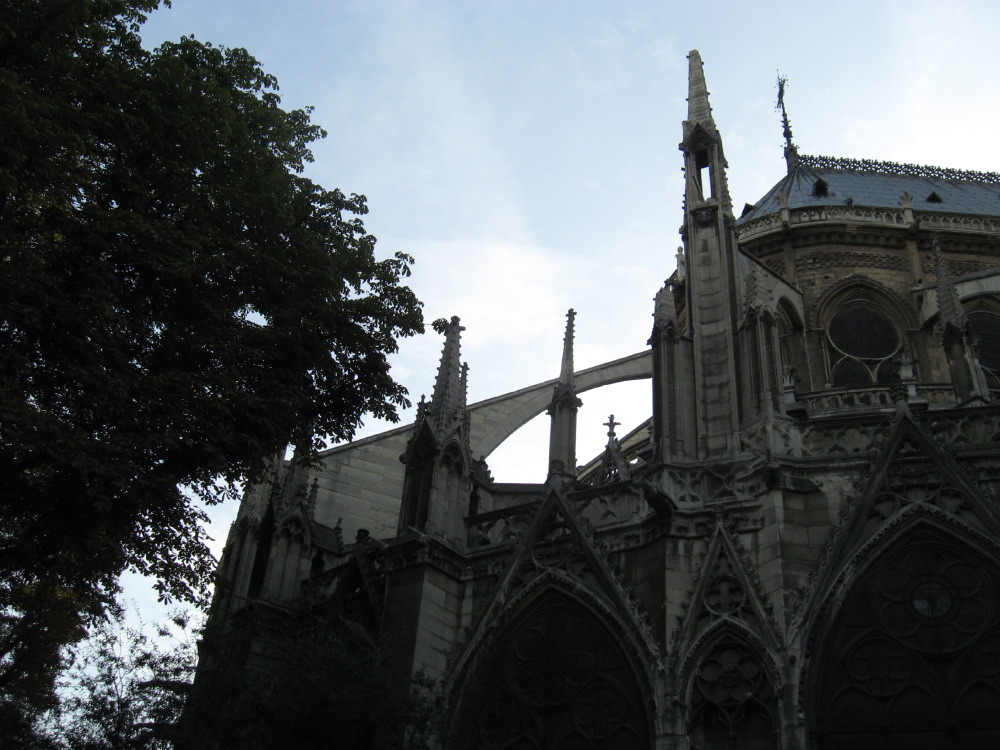 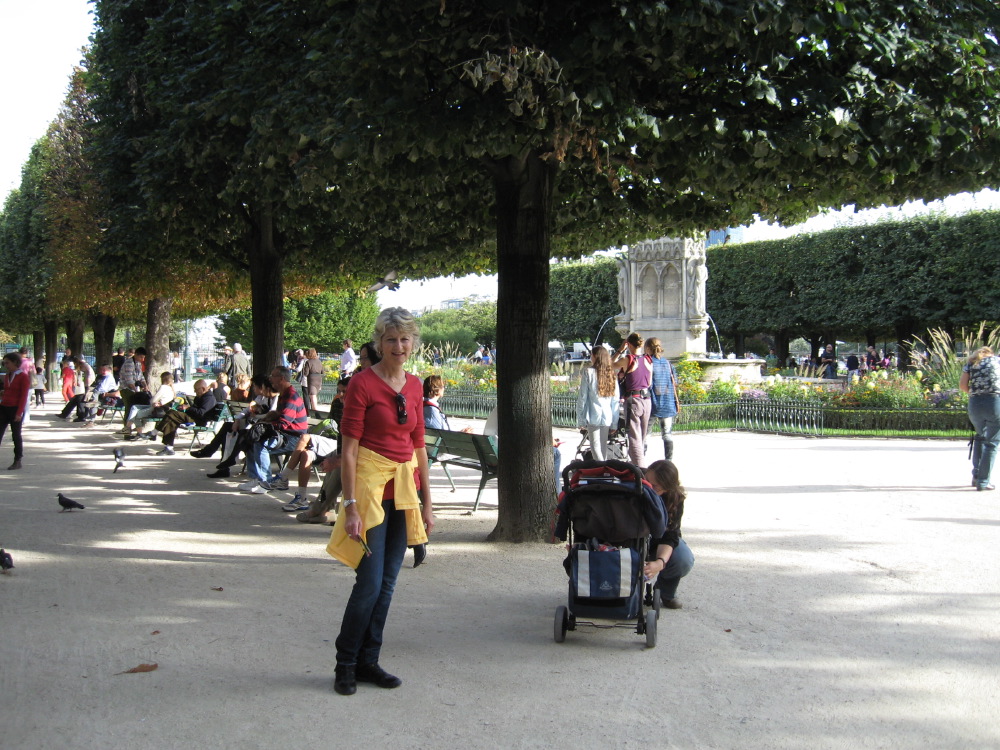 Lots of people enjoyed the shade in the little park behind the cathedral. 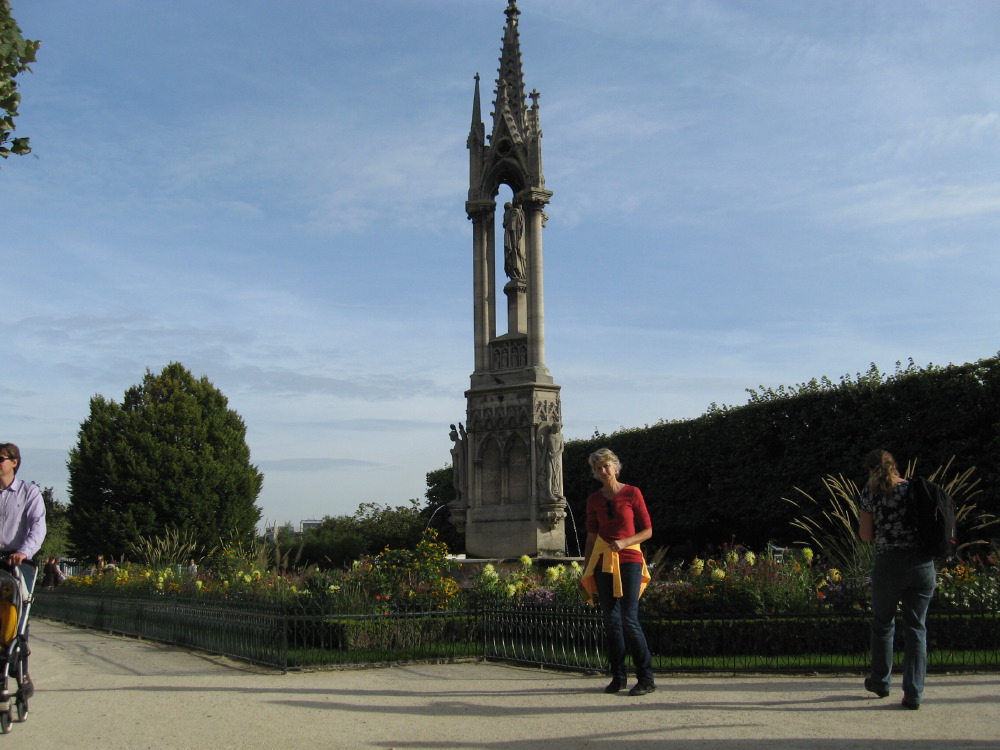 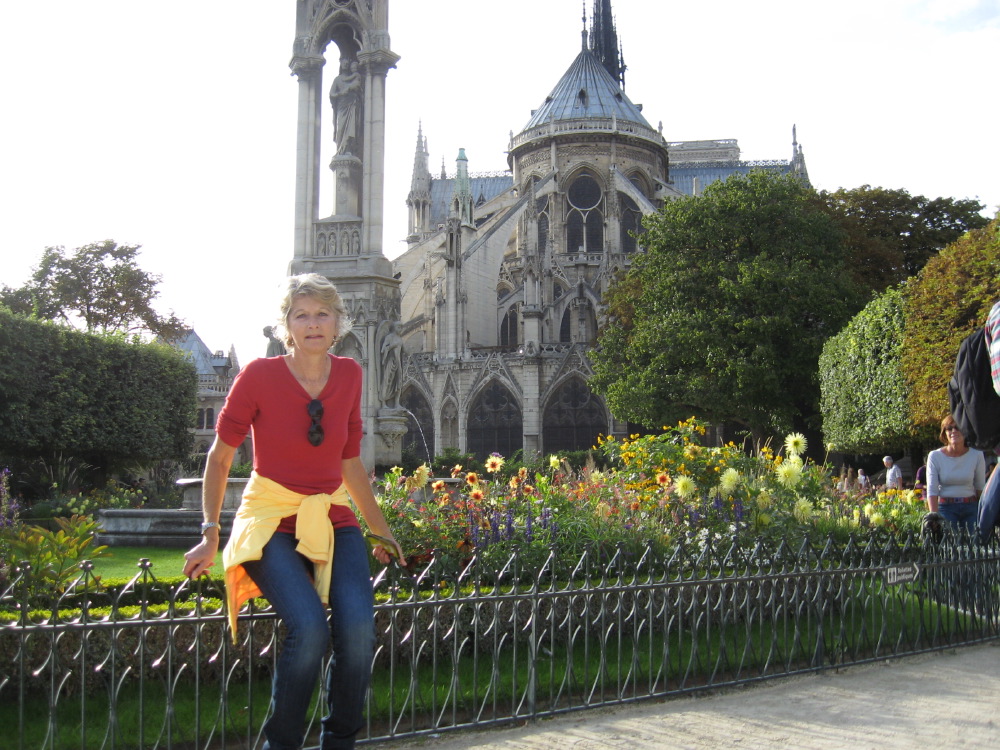 Sue sitting in the small garden behind the Notre Dame cathedral. 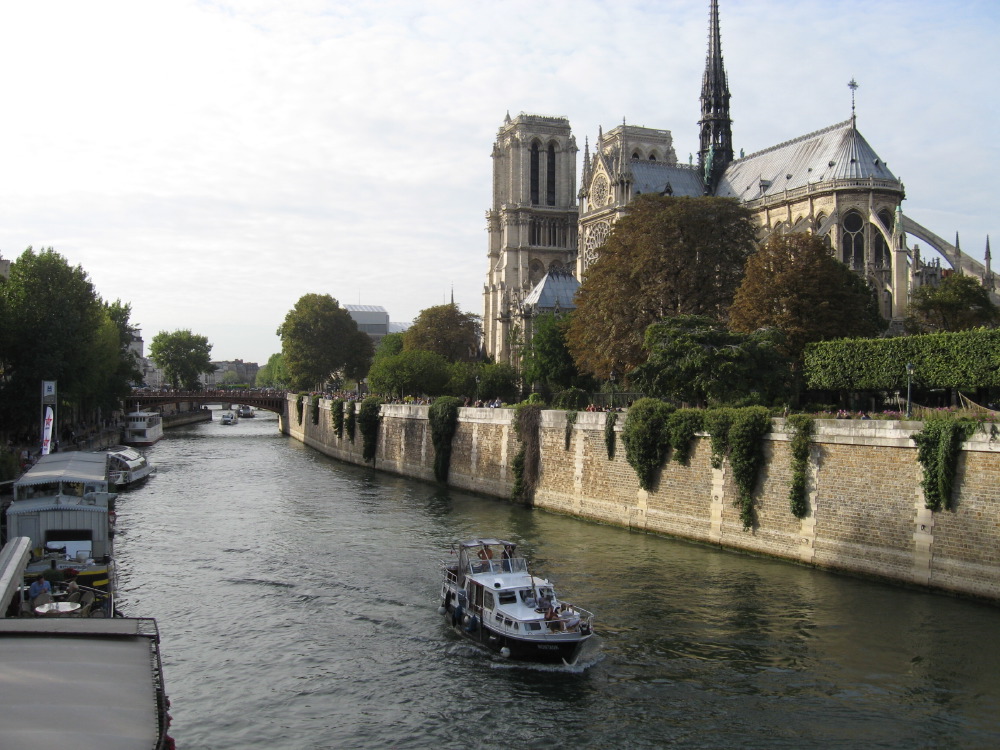 The Seine River, with the rear of the famous Notre Dame cathedral in the background.

We left the cathedral and headed back across the Seine by way of the Pont de l’Archeveche bridge. We walked for quite a way, until we stopped at a Metro station to check a map, and realized we were heading SOUTH, the opposite of the direction we wanted to go. So we backtracked and eventually got back to familiar territory. We were hot and tired and thirsty and luckily for us it was ‘happy hour’ at many of the bars we passed. So we stopped for some cool refreshment before continuing our way back home. Once we got back into Montmartre we stopped at a grocery store and picked up some sausage and mustard and beer. It was already getting dark outside by the time we got home. We had baguettes and cheese and sausage for our picnic supper. We’d walked more than 10kms and we were tired. We finished our day by watching the same news story (a shooting rampage in Nairobi) repeat about 40 times on CNN. Sue did some crosswords and I sorted through my photos. Went to bed at around 2am (again!).