I woke up way before my 6:00am alarm. Had half a banana and yogurt and I was off to the golf course. It’s about a 10-minute drive from John’s house to the Desert Willow Golf Resort. It was another cool morning. Sweater and jacket to start. Today I was riding with Bob — which meant that the Penner brothers were riding together! Hmmm… this could be interesting! 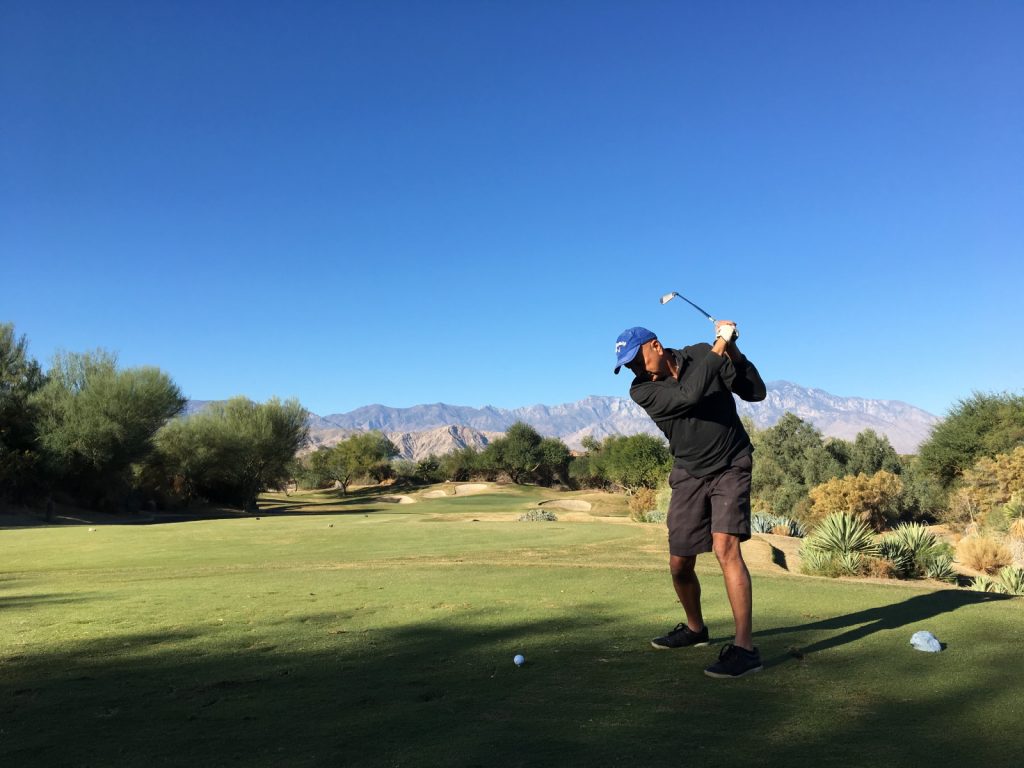 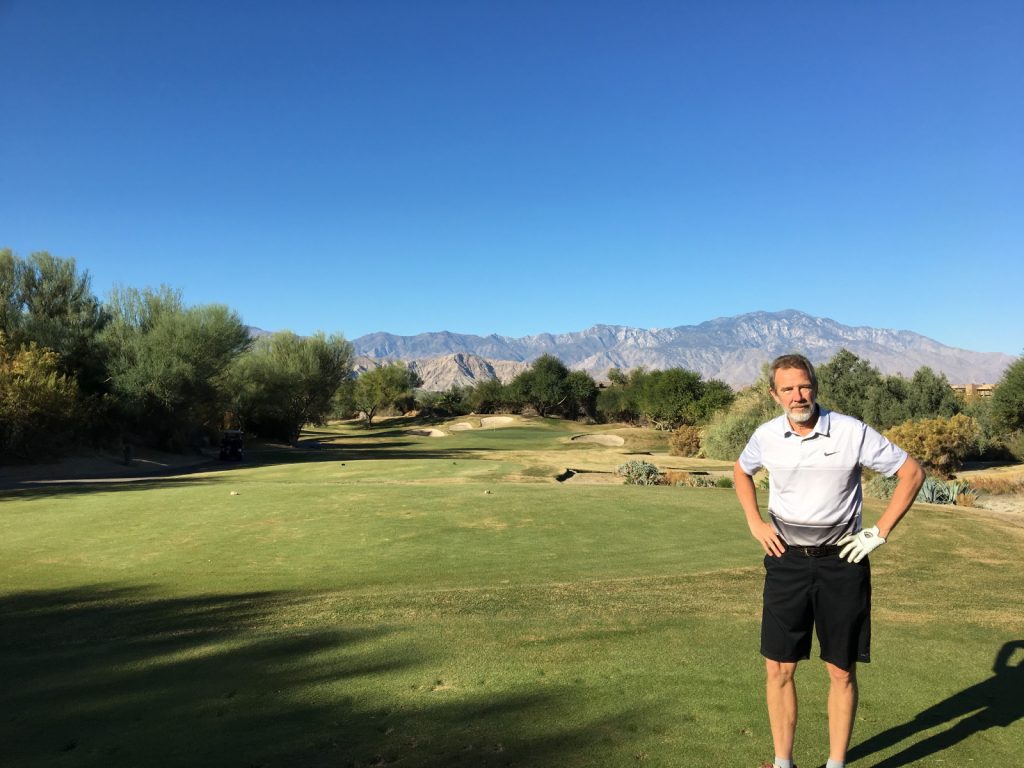 The Desert Willow Golf Resort features two 18-hole courses. Yesterday’s course, Firecliff, was green as green could be — it had been reseeded in October. Today’s round was on the Mountain View course, which would be closed after tomorrow for reseeding. The views were just as spectacular but the fairways were not lush and green like yesterday’s golf.

Whereas my start had been so good yesterday, today’s round (final round of 115!) would be a humbling experience. But score isn’t everything. I may not be a very good golfer, but I have a good time.

After our round Bob and I stopped at Ralph’s (grocery store) to pick up sandwich meat. Then back to Darrel’s for lunch.

After lunch Reg, Bob, and I decided to go for a hike. There are many good trails nearby. Reg remembered hiking the Art Smith trail, which begins (or ends) at the south end of town. We drove down Monterey, past the Bighorn Golf course, and parked the van at the small parking area beside the road. And off we were. Up, up, up. Stunning views of the resort community below, with snow-white sand traps on the green golf course. We met other hikers going up or down. I think we hiked for nearly an hour until we were almost at the top of the hill. Photo time. We met a couple of women who had started at the other end of the trail up in Cathedral Canyon at 7:30 in the morning — and were nearly done — quite impressive! As we turned to go back, a couple of guys on mountain bikes came zipping by us, bouncing from rock to rock! Crazy. 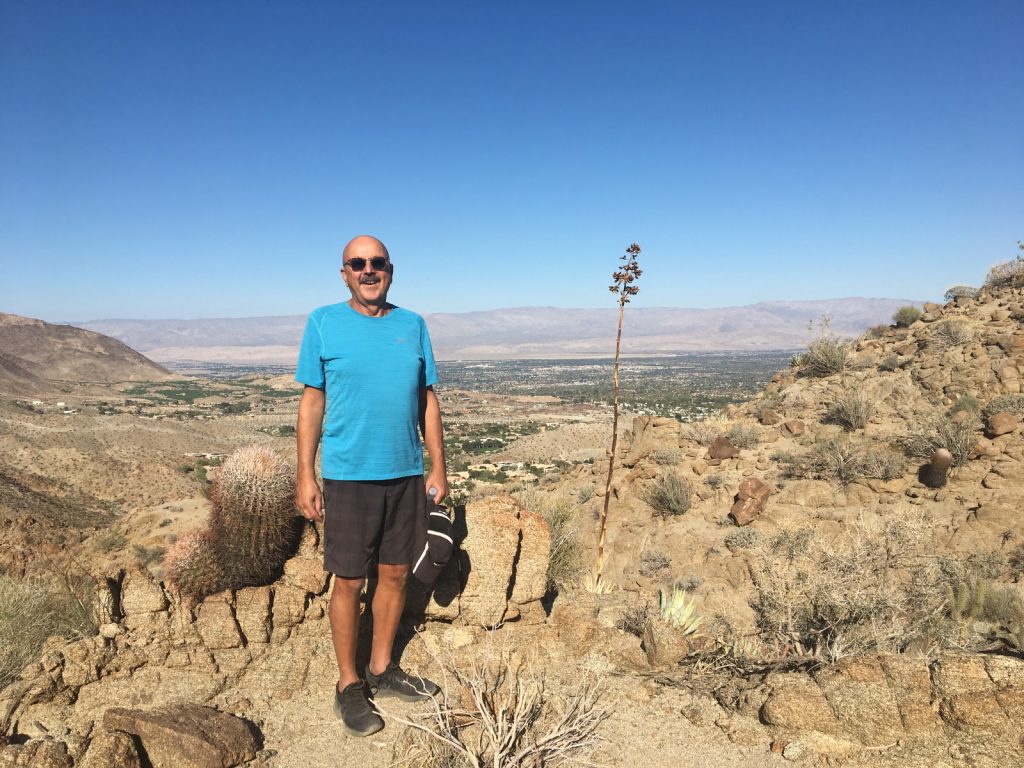 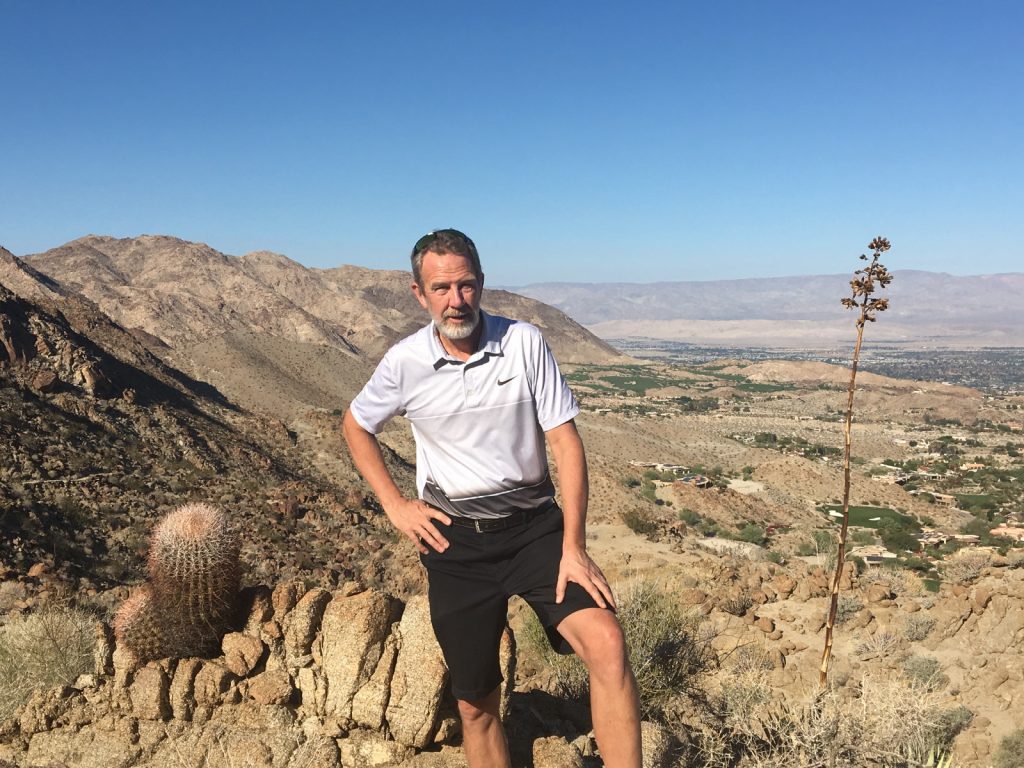 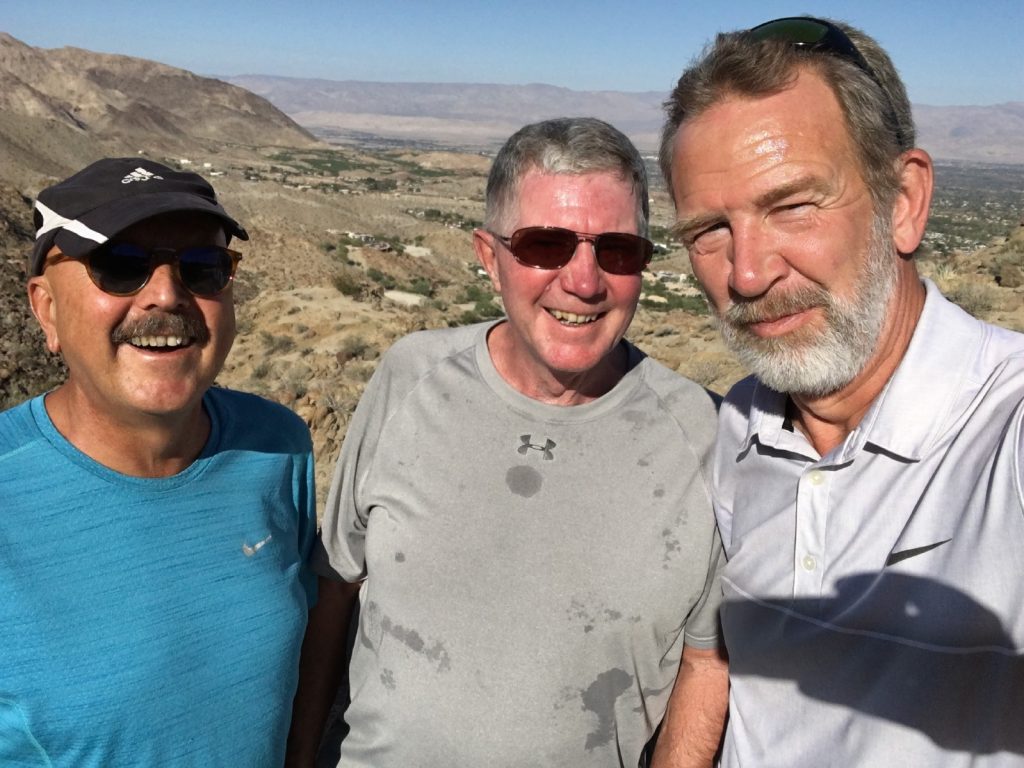 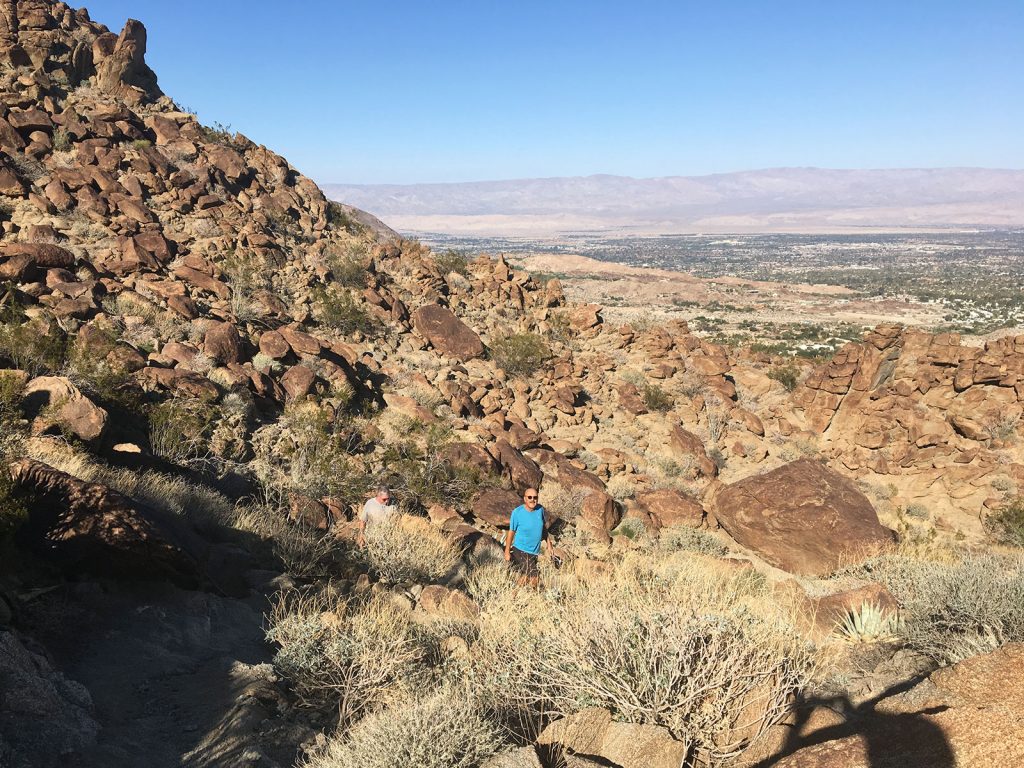 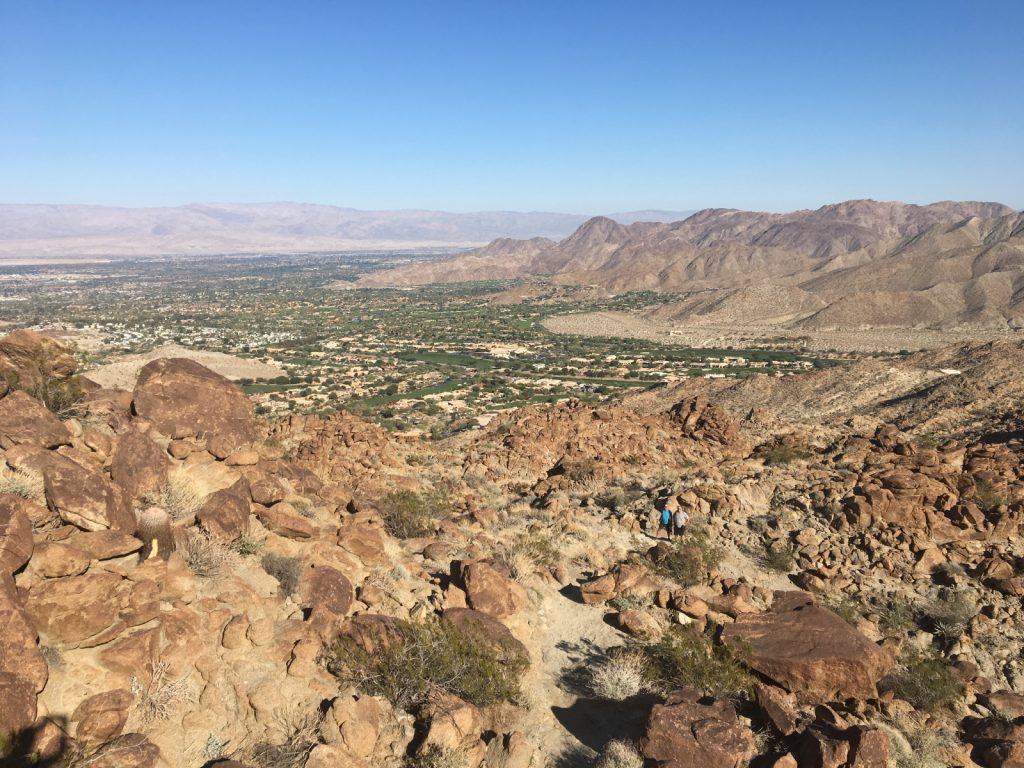 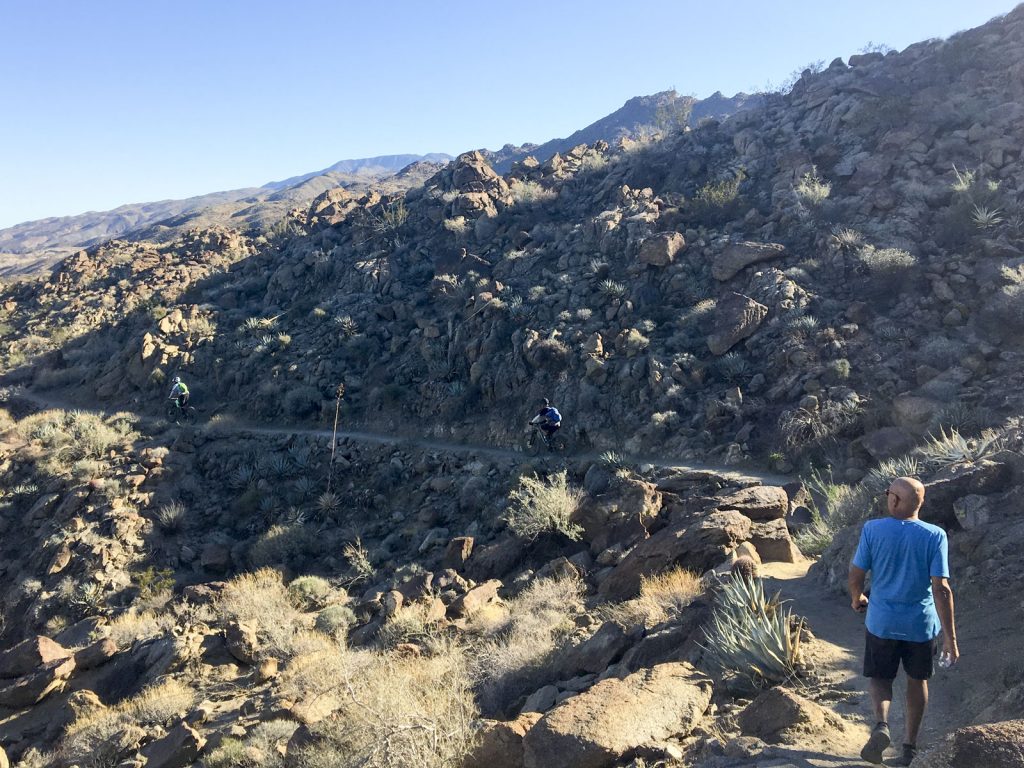 I drove the boys back to Darrel’s condo and went back to my house. I FaceTimed with the kids — gave them a quick tour of where I would be hanging out for the next 3 weeks. I showered and headed back to Darrel’s for happy hour and supper. Tonight we had big beef kebobs — another delicious meal.

With all that exercise, we were not going to be partying all night. I said goodbye to Bob and Reg (they were flying home tomorrow morning) and headed home. Tomorrow again — early to bed, early to rise, with another morning golf game on the schedule.