We had breakfast and packed up and said goodbye to Chris and Angela in Rotorua. It was grey and drizzling and Chris said the weatherman was warning of high winds through the pass down to Napier, so ‘be mindful’ driving today.

The road down to Napier, on the east coast, goes through Taupo, a city next to New Zealand’s biggest inland lake, Lake Taupo, in the central part of the north island. Chris suggested three points of interest along the way; all three were in Taupo. In fact, we were considering Taupo as a possible place to park ourselves for a month or so, so this would be an opportunity to scout out the place.

After an hour’s drive south we arrived in the Lake Taupo area. Our first stop was at a honey store — featuring ‘Manuka honey’. Hey, that’s on that list of ‘must try’ items a NZ girl gave to Sue on one of our walks yesterday! Manuka honey is a monofloral honey that comes from the nectar of the manuka tree. Here was a place to have a taste. Sue was taking a closer look at the $117.50 price sticker on a small jar of honey, and made a comment about it to the lady tourist standing next to her, something about our good Canadian honey. Turns out the lady was also from Canada — whereabouts? Manitoba. Where in Manitoba? Near Brandon. Small world. And the honey? Meh, maybe next time we come to New Zealand!

Next stop, Huka Falls. Apparently this 11-metre high waterfall is the most visited and photographed natural attraction in New Zealand. Well, if everybody’s taking photos, we must too. 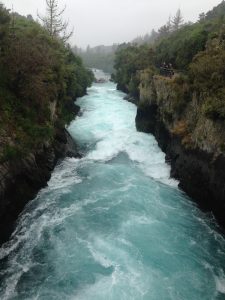 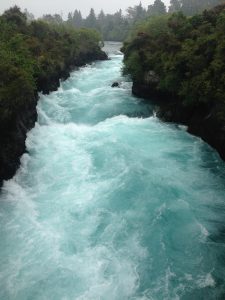 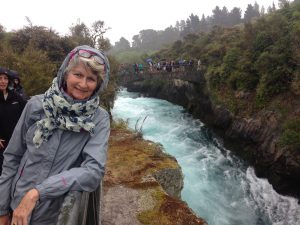 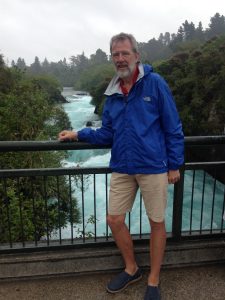 We were watching the clock — the next stop was at the Aratiatia Dam. Chris had told us that they open the dam at 10am, 12 noon, 2pm, and 4pm daily. It was a quarter to 12 when we parked our car in the roadside parking lot. We had just enough time to hike up (8 minutes) to the ‘top lookout’ (yikes, all this hiking and climbing must be cancelling out SOME of those calories from that big bag of chips!) We arrived at our lookout and found we were the only ones up there! Well, not for long. Soon we were joined by about 10 other camera-toting foreigners who soon finagled their way in front of us! And after a horn sounded 3 blasts, the dam gates of the Waikato River were opened. And sure enough, it only took a few minutes for the quiet river in the gorge to churn into a fast flowing waterfall! Apparently this was where they filmed the ‘barrel’ scene in one of the Hobbit movies (not that WE would have had a clue what that means!) 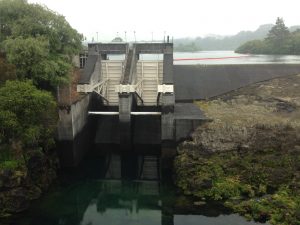 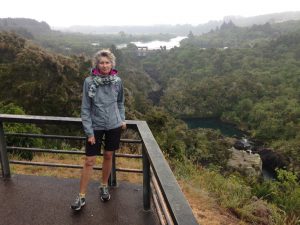 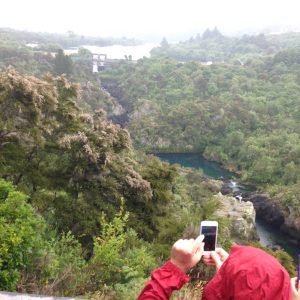 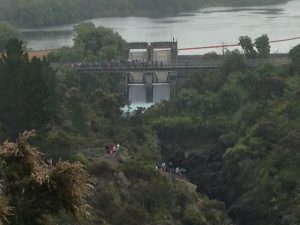 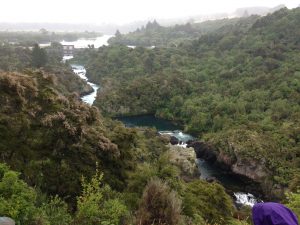 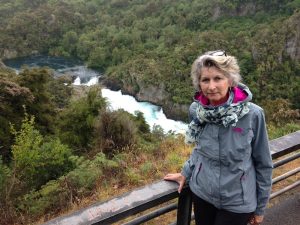 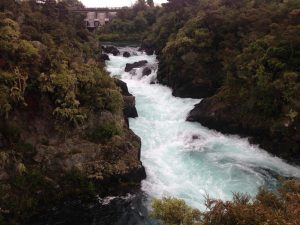 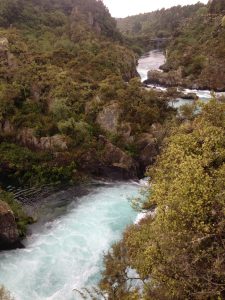 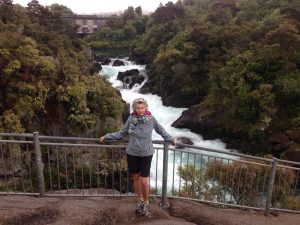 We hiked back to the car. Next stop — lunch. McDonald’s is right downtown, lakefront, in Taupo. We took note of the many hotels, motels, and apartment buildings along the shoreline drive as we drove through the city. And after refuelling the car, we were back on the road.

The winding up-and-down drive to Napier took us 2 hours. And yes, there were buffeting winds at a few points, but really the drive was quite enjoyable. (At least for me. I may have a tough time trying to explain why the floorboards are pushed out on the passenger side when we return the car to the rental shop.)

We found our B&B. Parked the car. Were welcomed by our hosts, Graeme and Robin. Very friendly. Cyclists. Nice house, ‘neat as a pin’ Sue says. After serving us drinks (2 drinks each, actually) all four of us head out into town. They give us a tour of the surroundings. Lots of restaurants all around us. We’re right near the beach. Not far from golf courses and wineries. Bike trails everywhere, and they have bikes for us to use.

Sue and I eat at a Thai restaurant. When we come back to our house, Robin has the TV on — shows me that ‘my’ NFL football games will be available on ‘free’ TV tomorrow morning at 10:30! So I won’t have to go sit at the hotel sports bar we’d visited earlier to make arrangements.

We visited until about 10pm. Then we went upstairs to our bedroom and I watched the highlights (low-lights?) of the two NFL playoff games I’d missed today. At 11:30 we turned out the lights.