By the time we were out of bed this morning, our hosts, Chris and Angela, had already left for their deep-sea fishing trip. Sue cut up bananas and kiwis, made toast, and Nescafe (yuck! that’s not a good way to start the day!) and we had breakfast. And then it was time to get our show on the road. Our little map/brochure in the room had 5 suggested hikes. We’d already done one of them yesterday (around Sulphur Bay). Today we were going to do 3 more.

Our first hike was right out of our house! and down the street, and across the big road, and BOOM! we were in the (California) Redwood Forest! Really! These redwoods came from California, were planted here as an ‘experiment’ in early 1900. Today this is truly a Redwood Forest. And there are hiking, cycling, and even equestrian trails throughout. Sue and I walked for about an hour and a half, for a 6.5km walk.

We got back to our B&B and hopped into the car. It was close to noon and time for lunch. Sue took some cake and pop from the house and we headed into town, looking for the grocery store. We were going to buy some sandwiches to take on our hike, but they had none! Oh well, we bought chips and hoped we’d find something  on the way. 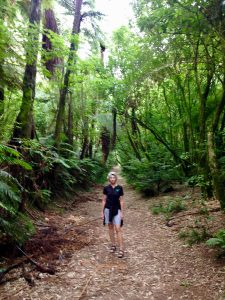 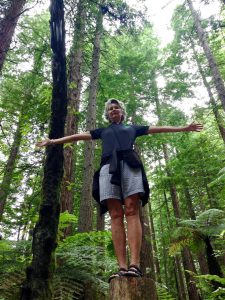 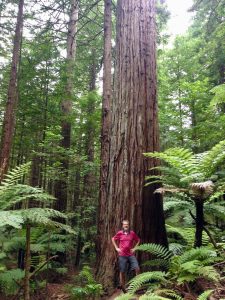 We drove down to Blue Lake, about 7 kms south of our place. Parked the car in a grassy field next to the boat launch. Started walking along the lake shore. Hmmm… no canteen or cafe here. Oh well, at least we have those salt ‘n vinegar chips! and a can of 7up. Only after we’d nearly finished the bag of chips and were starting our hike along the trail did we notice a big fancy hotel, and an airstream trailer/canteen selling hotdogs and hamburgers, right across the street from the trail. Too late. Now we’re hiking. 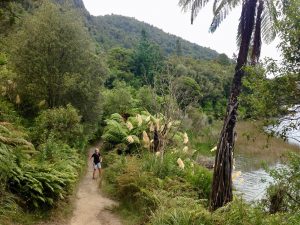 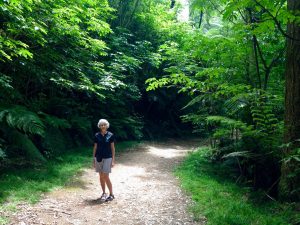 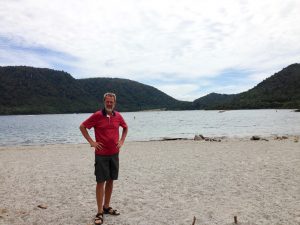 The hike along the often narrow, always up and down, trail was supposed to be 5.5kms. Again, the scenery along the way was incredible — almost ‘mystical’. No wonder they filmed the Lord of the Rings series here. And we could hear, and occasionally see, the motorboats pulling water-skiers, or the sea-doos roaring around on the lake, kids laughing, people enjoying the lake. And we were not alone on the hiking trail, although it was not at all crowded or too busy — just enough to make you feel safe, like you’re not alone out here. We both were wearing sandals, and by the time we got back to the car our feet were feeling it.

We drove back a bit and then took a turn east to another nearby lake, Lake Okareka. Our pamphlet said there was a boardwalk at the beginning of the walk, where we’d be walking through a sanctuary for black swans. It also said that the walk here would be about 1 hour to complete the 2.5km walk to the end of the trail, plus the same distance back.

We decided to change footwear — exchanged our sandals for runners. And off we went, along the boardwalk. About 2kms into the walk we were walking a dirt trail between the lake and the mountain. Sheep were grazing and maaa-ing on the hillside. Of course that reminded us of Sue’s aunt, who used to ask Sue and her brother Dave when the were naughty young children, “Well jie nich Jeisus siene schoene schoapjes senne?” 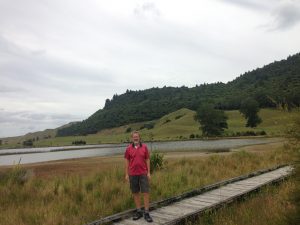 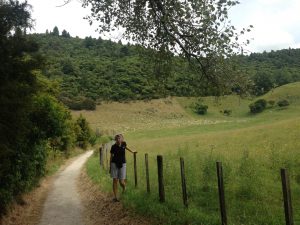 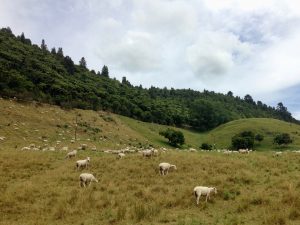 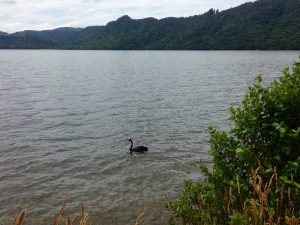 We were at the far end of the lake when two ‘kiwi’ girls passed us. They asked us where we were from. One of them, who once been to Hamilton Canada and loved to travel, asked if we’d tried __?__ yet. No. We don’t even know what that is. And then, after first suggesting to Sue that she should enter these items into her phone, and Sue saying she doesn’t really know how to operate her phone, the young lady took Sue’s phone and entered a list of ‘must-try’ New Zealand foods into Sue’s phone for her! “And this should cost you less than forty bucks,” she said when she was done. Cool!

We walked back to the car. Drove back to our B&B. Chris and Angela weren’t back from their fishing trip yet. We had a cool drink and showered and cleaned up. Then our hosts returned. We’d just arranged to meet the Funks at a restaurant in town at 6pm when our hosts returned. They thought they might smoke one of the fish they caught, cut up another for ‘ceviche’, and they invited us to join them for a beer on the patio. I’m not one  to say no to that!

It was just after 6. The Funks would be waiting for us at our restaurant, Terrace Kitchen. Once again we apologized to our hosts for having to leave in the middle of happy hour, and then we hied it out of there. We met the Funks at the restaurant.  They were waiting for us.

We got a table in the dining room. Ordered our food. Not all of it was as good as we’d hoped. We exchanged stories of our afternoon ‘goings on’ and ate our meals. At a little after 8pm we said goodbye — we’ll likely see them again in Napier tomorrow.

We hurried home to our B&B, but needed to check on what’s up with BB King — why is he wearing  a paisley smock and how will he get into the at the end when he’s beat everyone up.

Okay, that previous paragraph is not true. In fact, it makes NO SENSE. But I was so tired while I was writing my journal, I must have ‘fallen asleep’ but I kept writing! I don’t know where that comes from! I just read it to Sue, and she has no idea what I’m talking about! I’m just so exhausted from such a busy day…

Back at our B&B we sat outside on the patio and visited with Chris and Angela for another 2 hours. They were tired; so were we. But we enjoyed the company and the conversation until it was after 10pm and time to go to bed.