Woke up early this morning. It wasn’t raining. That meant we could have a leisurely breakfast and then go for our walk along the lagoon, and then get in the car and drive the 3 hours to New Plymouth, a little farther north on the west coast. And that’s what we did.

We said goodbye to our host lady. She told us that vandals had smashed car windows of the vehicles parked on their quiet street — very unusual. Her husband’s van had the rear window broken right out. Our car was parked just in front of the van but had no damage. That was a relief.

We drove a few blocks to the university and parked on the road in front of it. From there we followed the walking path along the ‘ox-bow’ lagoon. Lots of ducks were on both sides of the path, sleeping in a bit this morning. Across the water were GORGEOUS homes along the shoreline. Most also had beautiful landscaping and park-like gardens. We quit trying to avoid the duck turds on the sidewalk and just walked and looked at the properties. 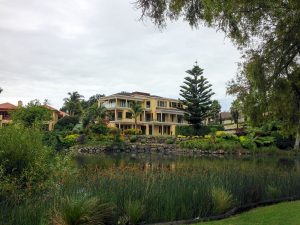 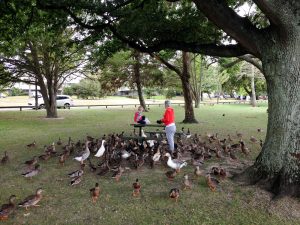 This little guy had a loaf of bread to feed to the ducks — and got a bit overwhelmed by the response!

Eventually the path led us to the Manawatu Golf Club, the oldest golf course in New Zealand. The course hosted a PGA Championship tournament this past weekend (the 2017 Lawnmaster Horizon Golf NZ PGA Championship) and all the signage and stages were still set up. We went into the clubhouse cafe and ordered a couple of cappuccinos. We took our coffees out on the patio and watched as several groups finished up on the 18th green. The course was in tiptop shape and looked incredible.

After our walk we got back in the car and headed out of town. It was eleven o’clock.

We stopped for lunch in the town of Whanganui. I’d been hankering for a KFC dinner for at least 2 months — today was my lucky day. Of course, Sue wasn’t NEARLY as excited as I was about the lunch. So while I enthused about how delicious my big juicy crispy chicken keel was, Sue was making faces and pulling that nice shaked and baked coating off of her little drumstick and gnawing at the dark meat underneath with tiny little bites. And of course the french fries were MUCH too salty and she wouldn’t eat any of those. I was sure happy that old Colonel Sanders was licking his fingers up in that big KFC in the sky and didn’t have to see or hear the ingratitude and complaining that I was subjected to.

We continued on our drive. We took the ‘coastal’ route, although we rarely saw the sea. Most of the country here was farmland — dairy and beef. The waters along the coast here are excellent for surfing. On our right was Mount Taranaki, whose 2518m peak poked through the low grey clouds every once in a while.

We arrived at our AirBnB place at 3pm. Our host showed up 10 minutes later. We parked in the secure parking lot and walked up to the 3rd floor apartment. Very nice. Our ‘sunroom’ in front of our bedrooms looked out over the ocean to the western sky. We got settled and then FaceTimed with Alex for a bit.

At 5:30 we grabbed our rain jackets and walked across the road to the Coastal Walkway, a ten kilometre path along the sea edge that stretches the length of the city. It was drizzling very lightly, not enough to warrant wearing the rain jackets. We walked about 2 kms to the port and found a seafood restaurant that our host had recommended. Tonight’s special: pan-fried scallops. We added grilled prawns and a greek salad. A fine meal. The rain was a little more significant on the walk back — let’s hope we don’t have rain all day tomorrow (as is forecasted). Back in the apartment I had hooked up the AppleTV and we started a new series, Designated Survivor.