We’re quite comfortable here in our studio apartment above a detached garage in Palmerston North. We have big rooms, a pretty nice kitchen, a new Sony TV on the wall, and fast internet. If the forecast wasn’t for a string of rainy days, we’d be happy to stay here a week. Palmerston North is actually a very nice town. It’s a university town. That means there is a large young educated population, and all that goes with that. Lots of cool restaurants, bicycle paths and walking paths everywhere, cinemas and art galleries, big expensive homes along the riverbanks. We decided that we shouldn’t let our first impression (that first bad night in a hotel) taint our view of the place.

So this morning after breakfast Sue and I sat and gazed into our devices. Sue, presumably, was looking for a studio apartment that would be suitable for us to stay in for a week. I was watching online videos of all the Sunday morning talk shows, checking out the latest Trump idiotic tweets, etc. (I can’t help myself! It’s like watching one of those ‘slow-motion’ car pile-ups on an icy 401 highway near Toronto.) Finally, it was time for lunch (the highlight of every day!).

After noodle soup and sandwiches (it was grey and cloudy outside and I was feeling a little chilled inside), we got ourselves ready to venture outdoors and see if we could get in a golf game. Sue actually wanted to do the river walk, but my research showed that the Palmerston Golf Course had a 2:30 twilight special on for $20, so we’ll leave the walk for tomorrow morning. So off we went to the golf course, about a 10-minute drive.

We parked the car and went into the clubhouse to check things out. No problem. The pro at the desk has a brother in Toronto, so right off the bat we were buddies! Sue found a golf shirt on sale — and bought it. I got the clubs all set up on a ‘trundler’ for Sue. And off we were. 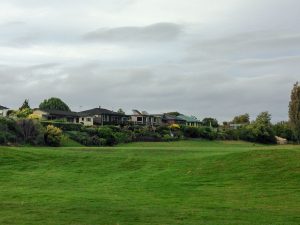 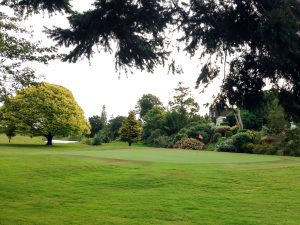 No, the score was nothing I’d care to put in my journal for posterity. But the day turned out to be a great day! The sun came out, the temperature was about 21, the couple ahead of us let us play through after they witnessed our great approach shots on hole number 1ðŸ˜œ, and so we had no one ahead and no one behind for the rest of the afternoon. And the course, which was a LONG par 72 for me (74 for Sue), was green and a bit hilly, and interesting, and fun. And the greens were fast and true. We finished just before 6pm.

We drove back to our apartment. Our host met us as we walked up the driveway and offered to pick some nice fresh juicy grapefruits from one of his trees in the front yard for us. Nice! A few minutes later we had a bag with half a dozen fresh-off-the-tree grapefruits sitting next to our entry door. Really, it’s too bad we can’t stay here a week!

We went upstairs to our apartment and had a little happy hour and read a bit. Then Sue got the hot-plate out and started on supper. Man, she can dress up wieners and beans so it looks and tastes as good as a steak dinner! Corn on the cob. Lots of onions and sliced wieners in the ‘organic’ beans she bought at the Countdown last night. Piled high over a couple of fresh buns from the bakery. Mmmm. And of course, the whole deal is fancied up considerably with a bottle of 2016 Wolf Blass Cabernet Merlot — $10 NZ at the supermarket! Pretty high-class camping we’re practicing here!

The sun was peeking through the clouds, giving it one last effort before sinking into the western sky. It was 7:30 and we had the WHOLE evening ahead of us. Time to finish a sudoku and see what’s on Netflix. SteinbachOnline says there’s another winter storm heading towards southeastern Manitoba. Well… Maybe a cloudy day in New Zealand isn’t so bad after all.

p.s. I may have said this previously, but just in case, I don’t want to forget it. Here are a couple of observations based on our two months here: