Sunday. No pancakes and sausages for breakfast. Man, when we get home next month we are gonna have to re-establish a sensible routine to our weekly menu! Enough with this yoghurt and fruit and sort-of-okay-but-not-really-all-that-good coffee in the motel room.

And if I could get brownie points for good intentions, I’d have made some real headway if I’d followed through on my plan to go to CHURCH this morning. From our balcony we can see the cool roofline and steeple of the St Joseph’s Church a block away. It looked so good I thought maybe we would go check it out this morning — maybe they’d have a good choir singing with a New Zealand ‘excent’ (that’s how Kiwi’s would say ‘accent’). But this morning (just like most of yesterday and all of last night) the rain was POURING. And besides, I looked at the website for the church and it didn’t look very welcoming at all — maybe the Catholics don’t have much of a thing going here in this Anglican (but mostly secular) country. (Oops, I just checked with Wikipedia, and I see that although over half the population is not religious, the Catholics outnumber the Anglicans by a percentage point!)

Well, all that and STILL I will have disappointed my mother — I woke up and heard the pouring rain and was quite happy to turn over and get another bit of shut-eye. And THEN came the aforementioned breakfast.

We sat around and read and wasted time until we had a FaceTime call from Max and Alex. Man, that little guy is growing up so fast — almost time to register for kindergarten! And it may be hard to believe, but I don’t think I’ve ever met anyone that is ALWAYS happy like Max is. Even when he’s sick, or tired, or even sad — he’s STILL happy. He just wants so badly to be happy! I sure hope some of those genetics in there are from me!

After another ‘in-house’ lunch by Sue, I amended her suggestion that we go for a walk by adding a “while carrying our golf clubs and chasing a white ball around” clause. And because Sue loves me, she acquiesced, and off we went to the Fitzroy Golf Club for another 18 holes. Why not? The rain had abated. In fact the sun came out and I had to schtritz some sunscreen onto my nose before we hit our first tee shot. There was a bit of water standing on the eighteenth green, but by the time we’d finished the first seventeen holes, the hot sun (yes, HOT! we were both wearing black golf shirts and for the first nine holes the sun was BAKING us!) had dried up that green nicely! It was a great afternoon. The rain stayed away, even though the clouds rolled in from the sea and it FELT like it might rain any minute for the last hour. Only a handful of golfers out on the course. In fact, no one working the clubhouse — we paid by ‘the honour system’, leaving our cash in an envelope that we popped into the slot in the clubhouse door. We both played well, and while how well we play doesn’t usually determine how much fun we have, today I played very well — probably my best round in nearly a year! And because Sue loves me, and even though she’s quite competitive, she too was happy for me, suggesting that maybe (finally!) all the money I spent on golf last year was starting to pay off! (Always about the money — that’s my Sue!) 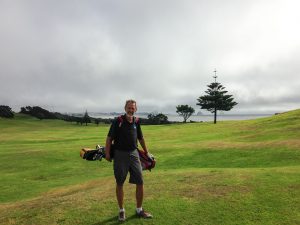 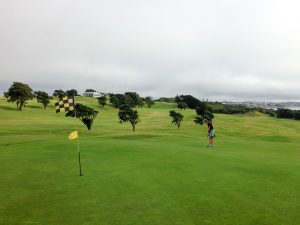 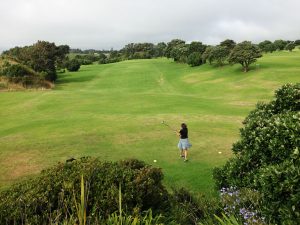 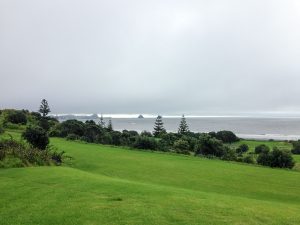 We stopped to checkout the Sunday afternoon concert in the park on the way home — but, sure enough, it was cancelled. Too much rain and I guess they had to make the call so even though it was NOT raining at 3 o’clock, it got cancelled.

We went home and had happy hour and showered and cleaned up. Time to go out for a nice meal.

Tonight we went to Arborio, a nice restaurant near the waterfront. Spicy fried calamari with chipotle aioli and lemon as a starter and prawns, peas, and spicy chorizo risotto as a main. Yum.

Back at the motel we were just settling in for a night of Netflix but our internet had ‘expired’. Oh shoot! I called the front desk (big sign on the door, it’s a long weekend here and looks like everything will be in ‘holiday mode’ until Tuesday). I didn’t expect an answer, but a minute later I got a call back and all was good again. So here we go: the final three episodes of ‘Fargo’, Season One, on Netflix. Looks to be a great way to end a great Sunday. Goodnight, everyone.