I should have had more than just a little bowl of yogurt with my coffee this morning. But Dave was in a hurry to get to the golf course while the morning temperature was still bearable, and MaryLou was joining us for the first nine holes. As it was, I had to hurry get my clubs and lather up my nose with sunscreen to catch up with the two of them waiting for me at the first tee.

Things started off pretty well. I parred the first hole and bogied the second. MaryLou had her best game since we’ve been here; she has always putted well, but now she’s getting good distance on her tee shots as well. Dave had 5 pars and 4 bogies on the front nine. But things took a turn for the worse after MaryLou left. Hmmm… 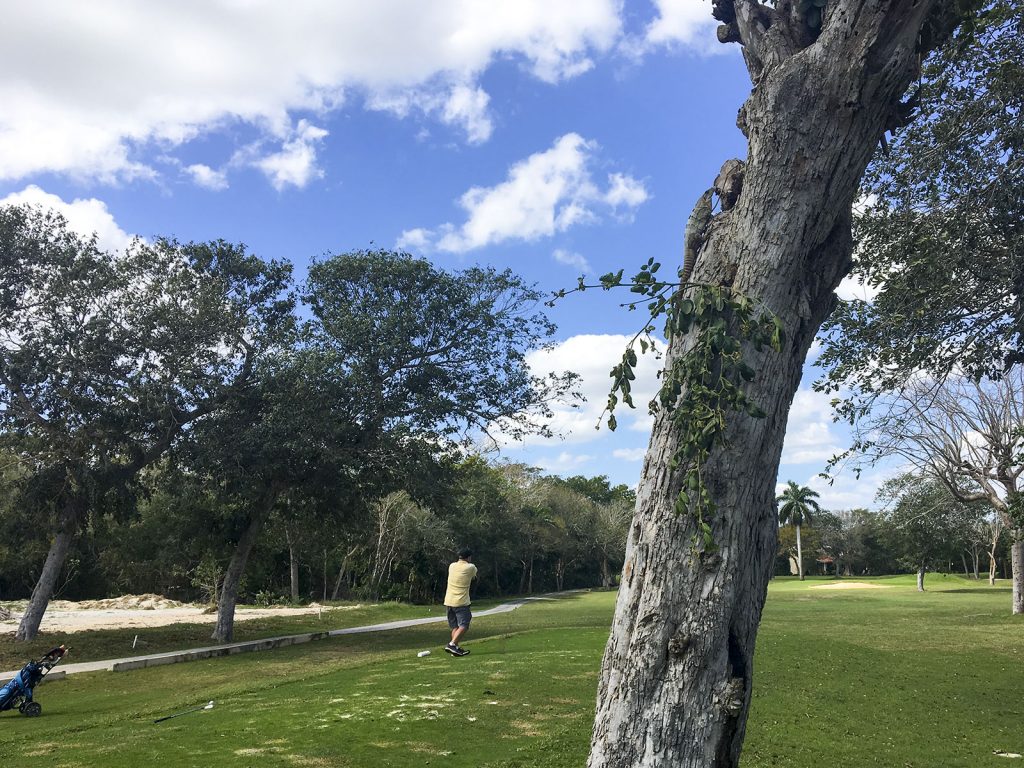 Iguana in the tree at the 12th tee. 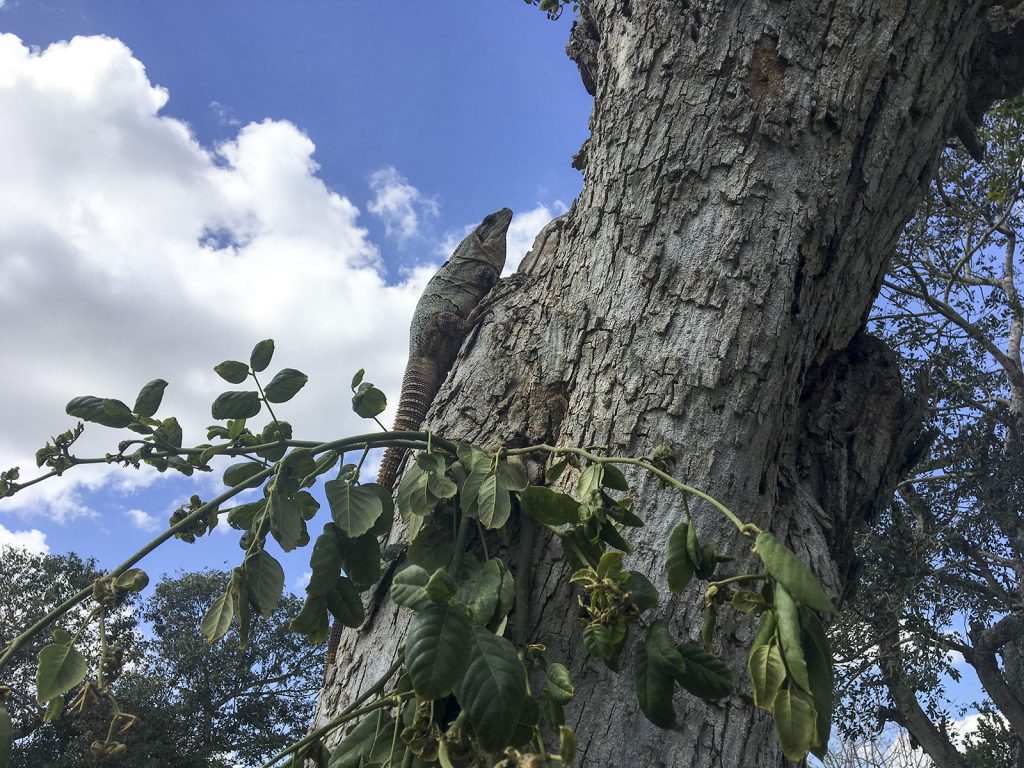 Close-up on the iguana.

Dave began the back nine with two sevens in a row. I had my second 8 on number 14. By now it was close to noon and the light breeze was losing the battle with the hot sun. I was losing the battle, too. By the time we got to the treacherous number 17 par 3, that cold Sol I drank back on number 12 was long gone. Too long. I was feeling poorly. Heat stroke. Dehydration. Or just exhausted from too many triple bogies to care. I smacked a few balls into the water and another couple into the bush and stumbled back to the clubhouse. 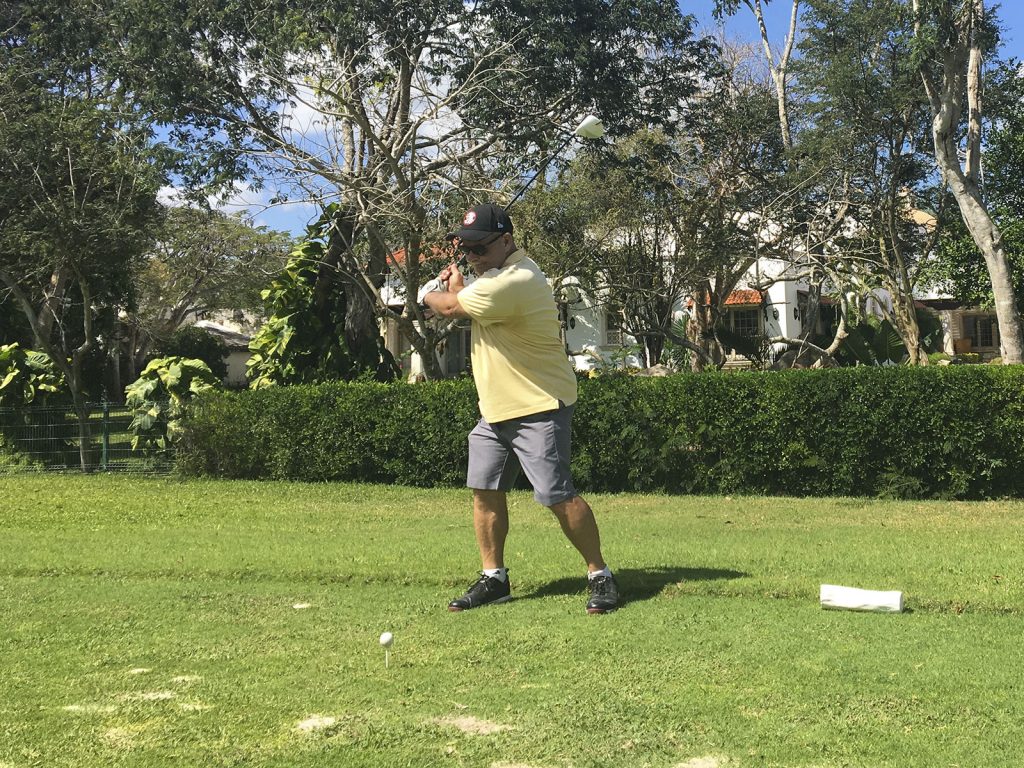 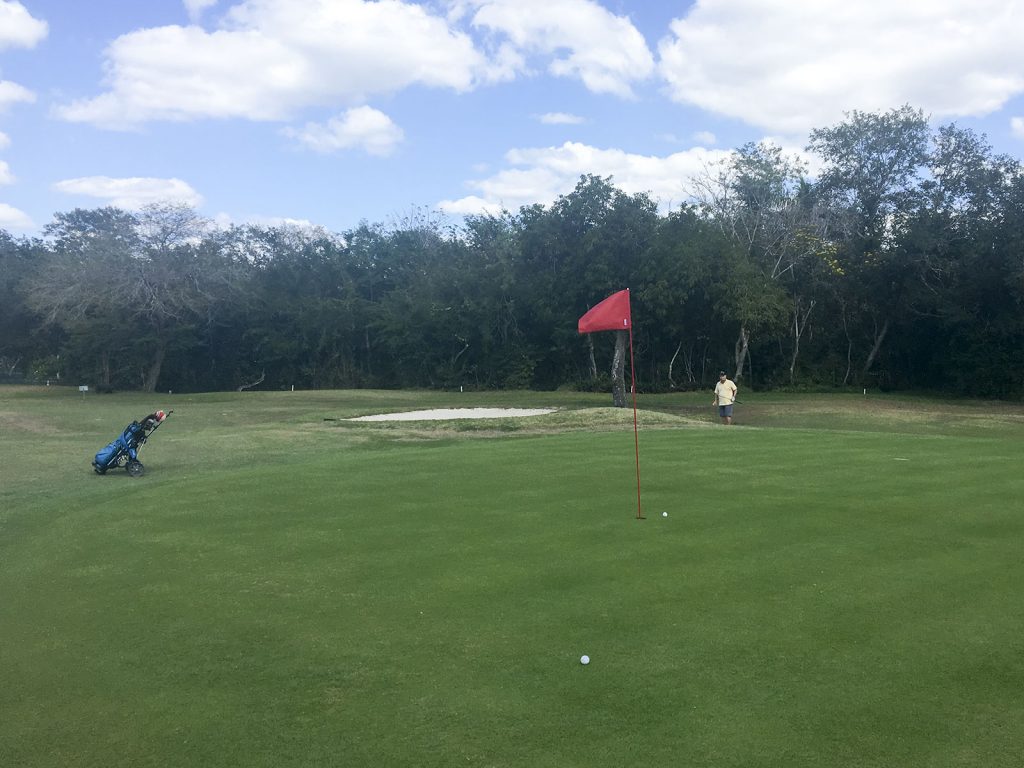 Good chip on the 18th green.

After many glasses of water and finishing off the 1.5 litre Coke in the fridge, it was time for lunch. We made sandwiches from the leftover chicken. I was starting to feel better.

By now it was 2 o’clock. Dave, who was a bit sorry that Dave W. had decided NOT to go birding, changed into his trunks and he and MaryLou went to the pool for the rest of the afternoon. I sat in the air-conditioned house and did a little computer work and a couple of sudokus.

Around 5:00 the Driedgers came back to the house for happy hour. Dave flipped through the channels, looking for one that was airing “Jeopardy”. Nope. Well let’s see what time the Raptors are on TV.

We walked to the superette at the front gate and ordered an Uber. It’s a LOT cheaper to get a ride from the front gate, which is a 10-minute walk from our apartment, than to have the taxi come pick us up at our apartment. And it usually takes more than 10 minutes for the Uber to get through the high security at the front gate. The security guards first have to call the house to make sure we’re expecting someone. Then the driver has to leave his driver’s license with the guards, and one of the guards records the license number of the car. So we have learned to make our pick-up point just outside the front gate and meet the Uber there.

We got dropped off at the GalerÃ­as Mérida mall, not too far from our place. The mall has many shops on two floors, surrounding an indoor (the only) ice rink in the Yucatan. 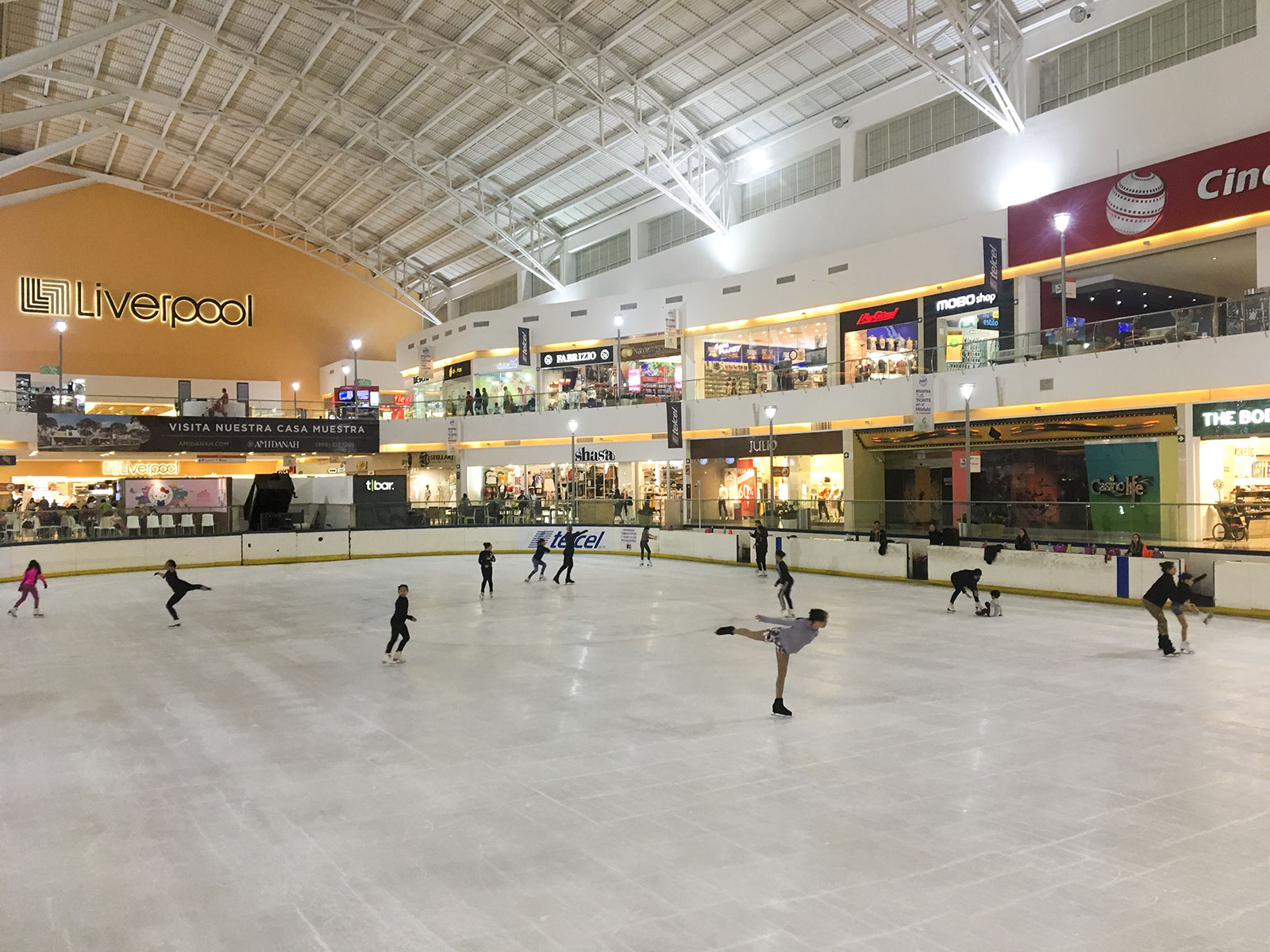 There are several restaurant options — and tonight we decided on sushi. Unfortunately our waiters could not speak any English, and we couldn’t speak any Spanish, and none of us could speak Japanese. So somehow we managed to order 3 different sushi options and 3 beers and a glass of wine. Dave tried to get our waiter to speak into the Google Translate program on his phone but we were unable to figure out why he got served two Bohemias when he only ordered one.

I didn’t overeat on sushi, so I was looking forward to a nice chocolatey doughnut for dessert. Dave went to look for the Krispy Kreme shop while I went to look for a place to buy deodorant. When we met back at the side of the ice rink we’d both struck out. We took an Uber back to our place.

We were soon in our respective seats in front of the big TV. By now the Jets were well on their way to losing another game and the Raptors had won theirs. We queued up two more episodes of “The Kominsky Method” and were in bed by eleven o’clock.