A very interesting day today. We woke up real early, grabbed coffees to go from the La Quinta (Colorado Springs) breakfast offerings, and left in the dark. Filled up gas and hit the road. I was a bit worried about the snow that had been forecast, but the roads for the first hour were dry and clear. 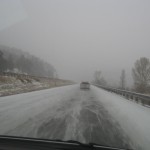 The road out of Colorado Springs was okay when we first set out, but by mid-morning blowing snow was making the drive a bit challenging. 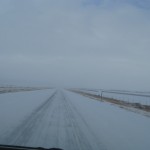 Soon the highway was nothing more than a set of tracks leading off into the distance. An occasional snow plough was cleaning the oncoming lane, but our lane was snow-covered and treacherous. 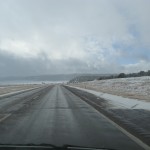 Eventually the warmer temperatures and the salt and sand on the road melted some of the snow and made the drive less scary if somewhat messy. 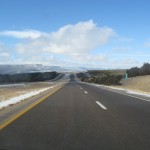 By mid-afternoon the highways were clear and the road out of Albuquerque was as scenic as we remembered it. 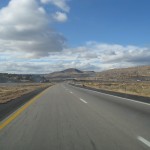 Blue skies and red rockie ranges. But the good road conditions did not last. We turned south at Holbrook, AZ and had several hours of wet and snow mountain driving around Payson.

Then it got interesting. Snow began falling and a few miles on it was getting tough to pass some of the more cautious drivers because of accumulated snow on the road. One lane for driving. Then worse! No lanes for driving! Roads were snow covered. I was glad we weren’t driving in the dark It was hard to see the road. 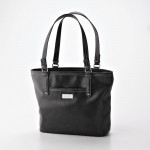 Stopped in Albuquerque, NM for lunch and gas. Found a McDonalds. Ordered a Big Mac for me and sundae for Sue. Great. After our quick lunch stop we left and drove to the gas station next door to fill up. Sue was going to wash the windows. I had to go in and leave my drivers as security — no zip code for my credit card so it doesn’t really work here. As I got out of the van to fill up, Sue discovered that her purse was missing. She’d forgotten it at McDonald’s! She ran across the driveway to see if it was still there. I filled up the van. I knew when she came back that it was gone. What was in the purse? About $300 cash, all her credit cards, our passports, etc. Hmmm.. Not good. Sue went back into the restaurant to ask the staff and patrons if anyone had seen who had taken her purse.
After I finished filling the van I drove it to the McDonald’s parking lot. We decided to Skype/phone the credit card companies and report the stolen cards. Did that. Then the McDonald’s manager suggested we report this to police. We did that. Were told it could be hours until police would check this out, but we should wait around.
In the meantime, Sue again went in and quizzed the patrons. Nothing. The manager suggested that we check the surveillance video. And there he was — caught on tape, clear as day. Not the guy Sue suspected, but a young guy whom Sue had questioned and had even looked into his backpack.
Then the policeman arrived. We completed a report. He looked at the tape. Yep, clear as day! He would drive around looking for the guy. Maybe the purse had been dropped into a dumpster around here.

We left our contact info with the cop, wished him a happy new year, and then, after about a 2 hour delay, got back into the van and continued on our way. No, Sue wouldn’t be driving — no driver’s license.

The road into Arizona was pretty good. We turned south at Holbrook and stopped for supper (tacos). Continued on until Heber, where we refueled. The road was surprisingly windy and wet. LOTS of snow. Now that we were in darkness, driving took full concentration. Windshield constantly splashed by cars ahead.

Finally at 8:30pm we arrived at the Hampton Inn near the Sky Harbour Airport in Phoenix. And as we went in to check-in, Sue was informed that she was the lucky ‘Guest of the Day’. We got upgraded to a suite! Sweet!

We got into our room, checked our emails (nope, no ‘good’ news from the nice Albuquerque policeman). Had some snacks, Sue had some wine and I a couple of beers (New Year’s party!), and after a bit of computing, we went to bed.

Tomorrow we will begin our day by calling the passport office, our TracFone contact to get the international calling set up, etc. Then we’ll take the four-hour drive to Palm Desert. Home real soon.