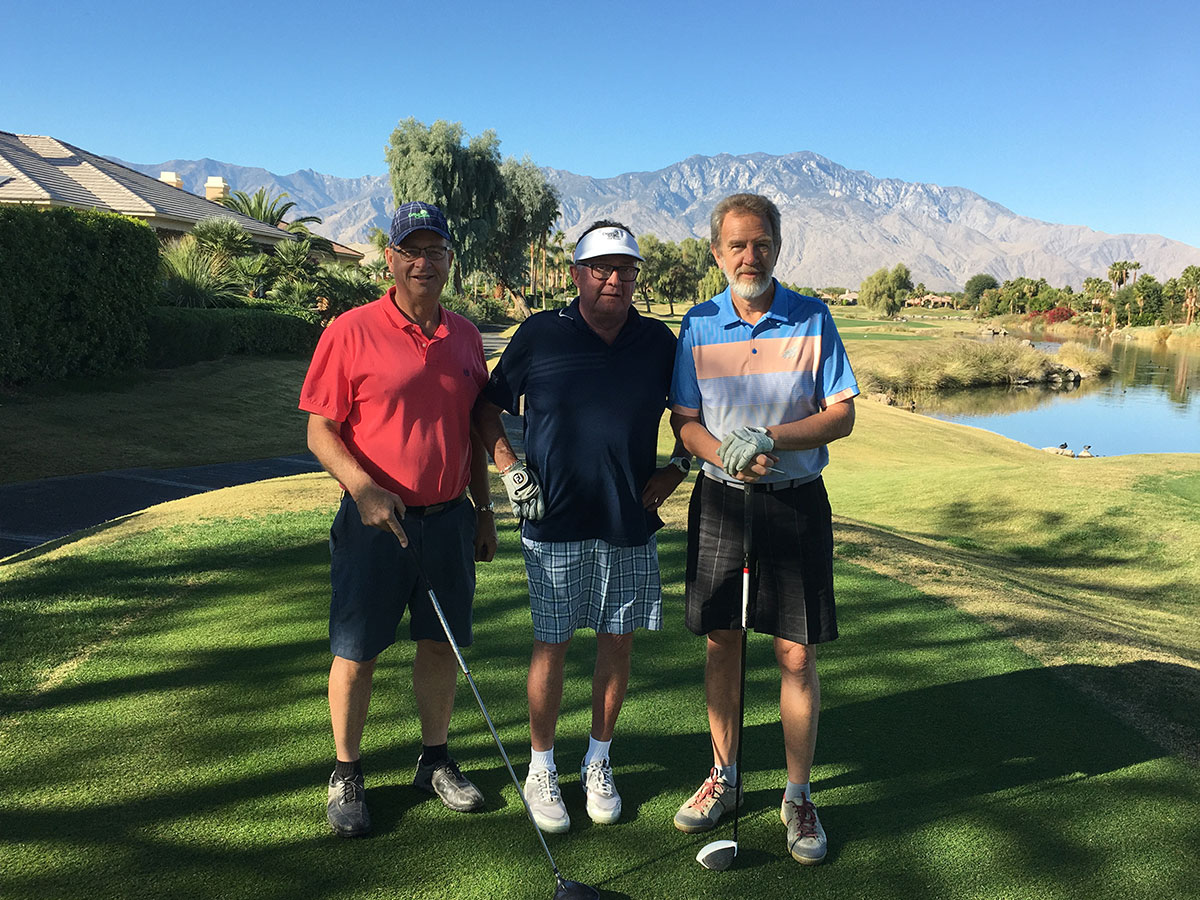 And what a fine day for golf it was! I woke up at 6:30. Coffee and cereal. Ed was already sipping his tea when I got up. We left Val to fend for herself for the morning and headed out to pick up Darrel at his house at 8:00. From there we drove to the Mission Hills Golf Course in Rancho Mirage.

We checked in and then went to hit a few balls on the driving range. When the starter called us up we were introduced to our fourth partner, Bruce. Bruce was from Portland but had a home here in Rancho Los Palmas and spends his winters here.

The Westin Mission Hills Resort actually has TWO courses — we were playing the Gary Player course, and it was lovely. 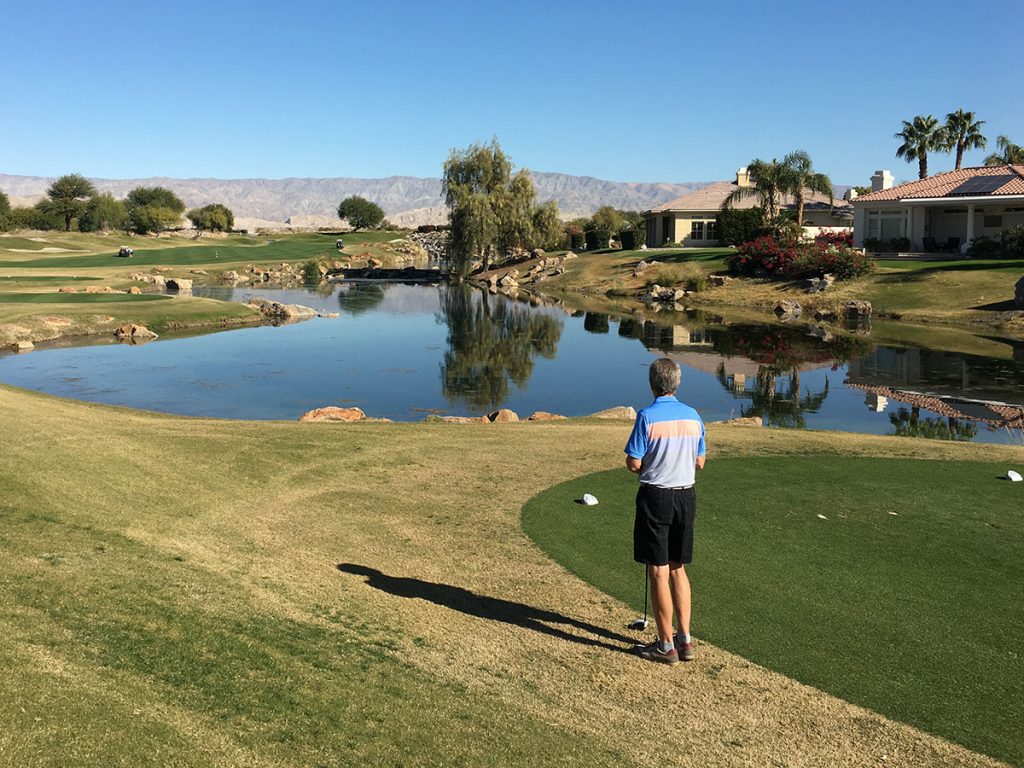 You mean I have to get the ball OVER all that water? 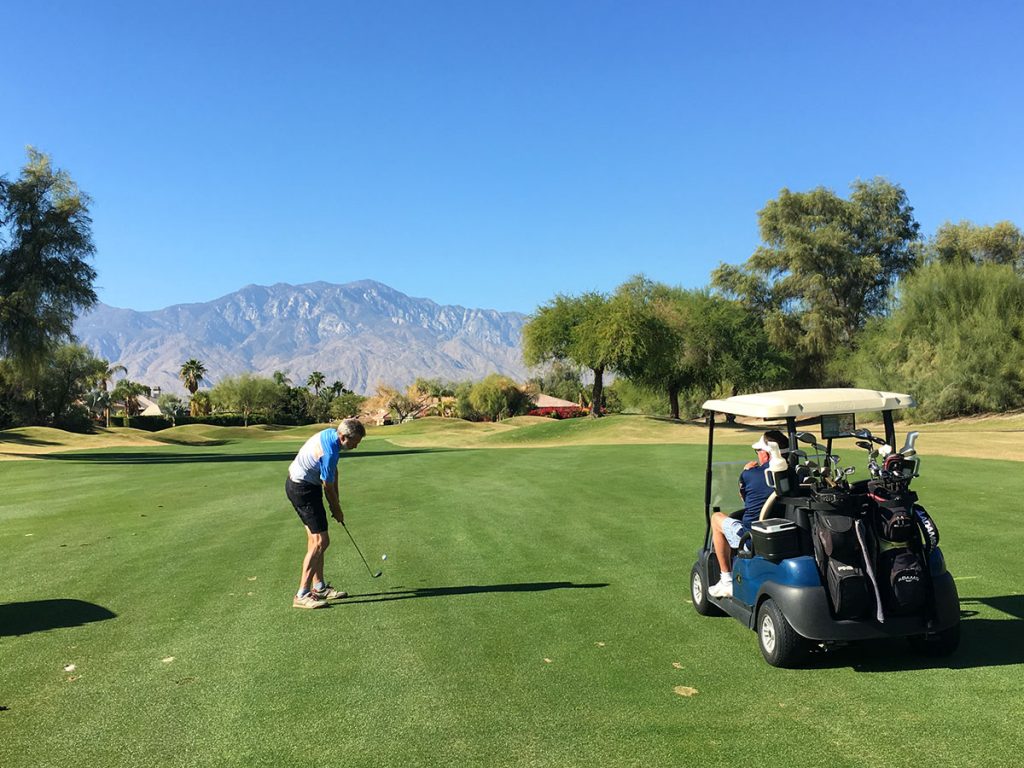 An easy chip onto the green. 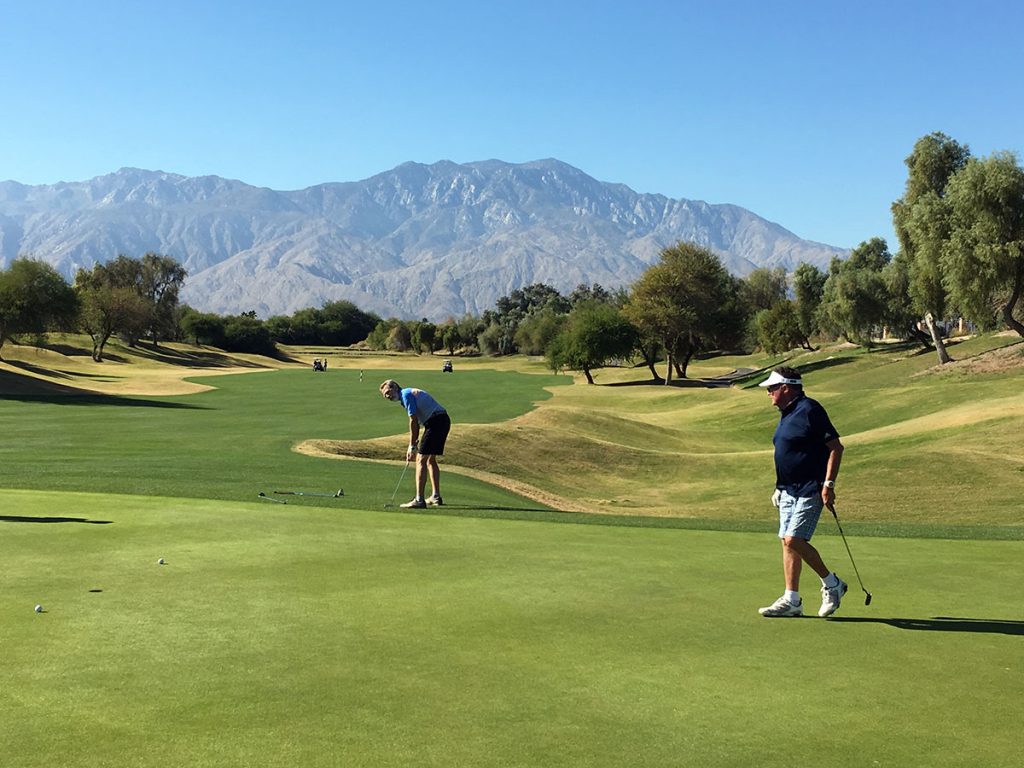 Four putts and we’re off to the next hole. 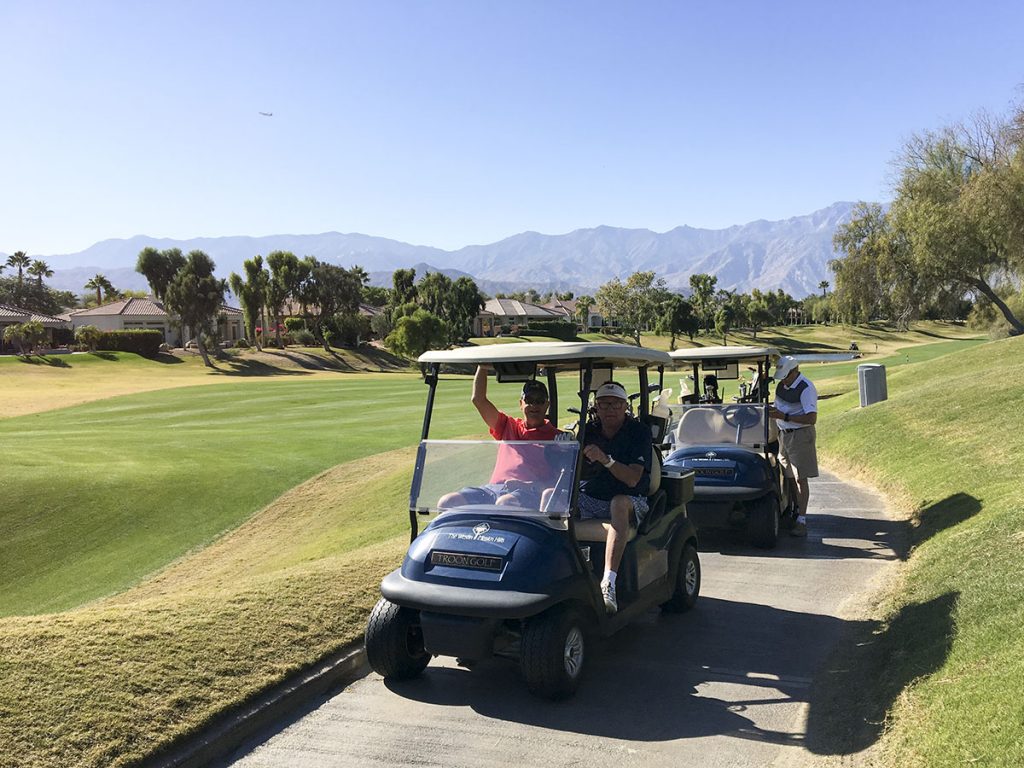 There was water in play on many holes. We started on the back nine, and Bruce, my partner, had only brought 7 golf balls with him. And he was out of balls after the first 5 holes! He’d broken his ankle in June, and apparently it was still causing him some problems. He came limping back to the cart after every missed shot. Well, it was going to be my last golf game on this trip, and I’d collected quite a few balls the last time I golfed at Cathedral Canyon — so I offered him as many balls as he might need from my golf bag.

And so we continued. Bruce had golfed this course many times, and he liked to tell me all about the next hole after we’d putted out the last one. I guess the advice helped me a bit more than it did him — I was hitting the ball straight off the tee and had many opportunities for par, some of which I made.

After finishing nine holes we had a short wait before continuing to Hole #1 tee box. Ed bought a couple of tall IPAs which turned out to taste as good as they looked, and looked as good as they tasted. 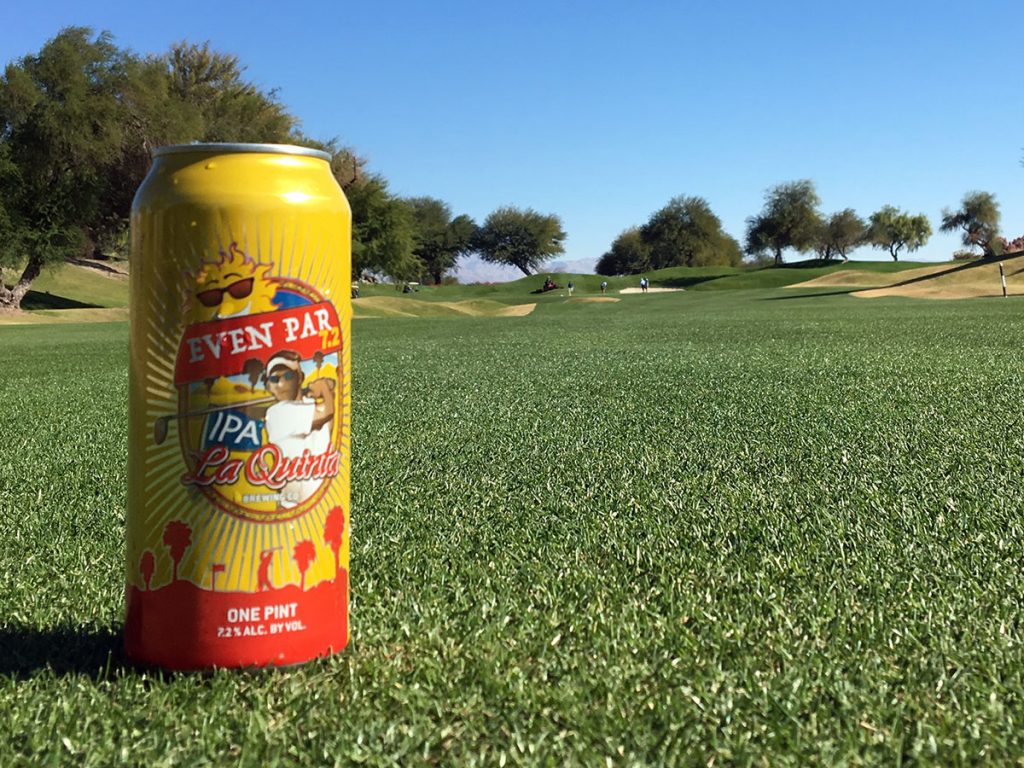 Sometimes we had to settle for Even Par! 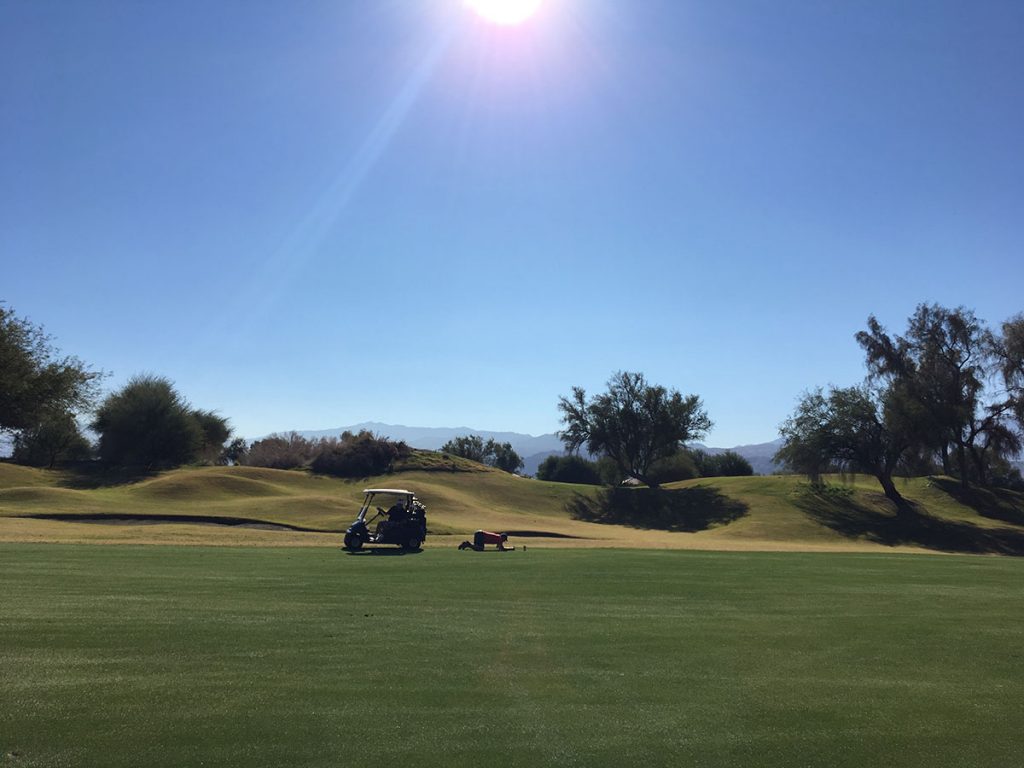 The cool IPA beers brought Ed to his knees. 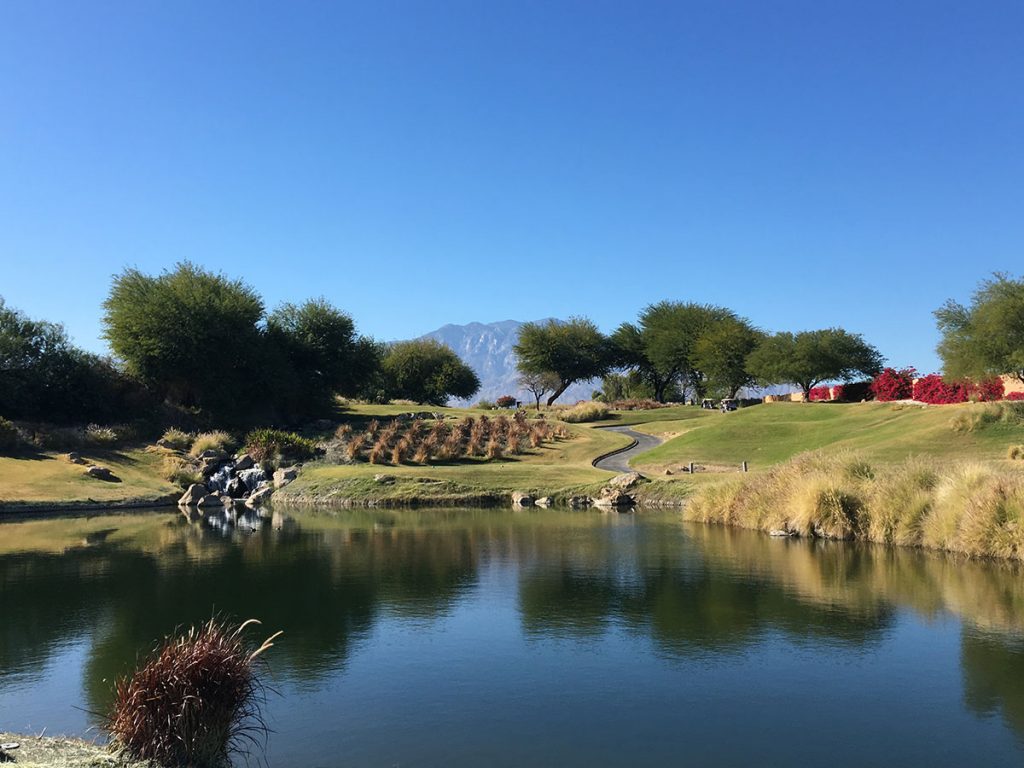 Water and even a waterfall — gorgeous! 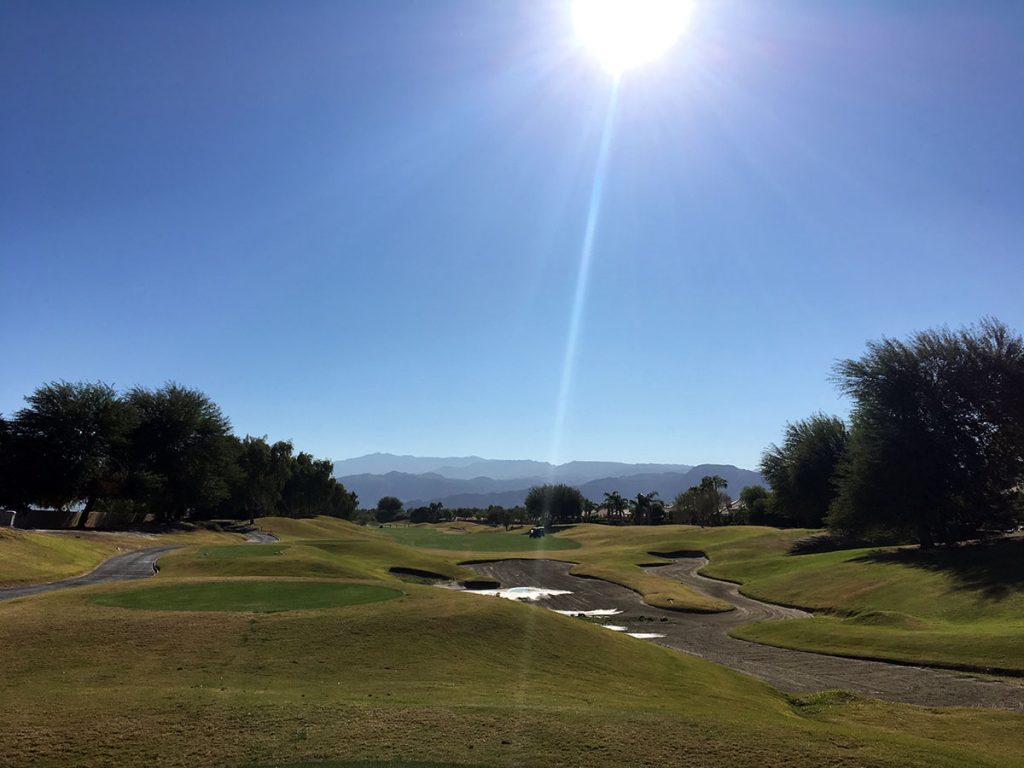 Bruce: You’ll want to stay on the left side of the fairway on this shot.

After the game Darrel invited us to stop by his place for a beer. I dropped the boys off, went home to pick up Val, and went back to Darrel’s. He and Cari are packing up and heading home tomorrow. After a quick refreshment we said goodbye and went back to my house for a late lunch. I was starving. Sandwiches and chips, and a leftover enchilada for me, courtesy of Val. We ate lunch on the patio. By late afternoon Ed and Val were ready to drive back to their place in Gold Canyon. Although their visit was a brief one, it was so good to have them here.

I did a load of laundry and started gathering some of my things and packing up. I called Carlos, the caretaker guy who looks after the condo for John and Connie, to let him know I’d be checking out early, probably sometime around lunch tomorrow. That would give him and his wife an extra day to clean the place for the next visitors. I drove downtown to pick up a couple of things. I had a late supper of some of the leftover things in my fridge. I packed my closetful of golf shirts and shorts into my big suitcase. I took the pedals and front wheel off my bike and started piling stuff into the van. Finally, at around 10:00pm, I sat down on the couch with my computer and wrote my journal. And now that is done. I still need to write something nice into the guest book here and then I will retire to the bedroom for one last sleep in PD. oh yeah, I almost forgot — I shot 90 today. See you tomorrow!