I woke up at 6:30. Got a text from Robert wishing me a good drive home. I didn’t get out of bed right away — but then at around 6:40 the house ‘shuddered’. The patio doors rattled and I heard a little ‘crunch’ noise, probably the shingles on the roof. A tremor. I know what this is. I’ve experienced them a few times — notably six years ago when we were in a rented house not far from here and the whole house shook! I wondered if we might notice some after-shocks — that’s what we got six years ago. But I think that was it for this morning. But enough to roust me out of bed. I showered and stripped the bedding and put in a load of laundry. I had breakfast and then finished packing.

It was around 9:30 when I backed the van off the driveway for the last time. I drove up along Monterey Ave, said goodbye to Bob Hope and Frank Sinatra and Dinah Shore. Got on the I-10 and headed towards L.A. But not all the way there! No, I soon turned north and zigged and zagged my way up through the Joshua Tree National Park. I think within half an hour of leaving Palm Desert, the temperature in my van indicated that it had dropped from 17 down to 9 degrees. In half an hour! And now the rain began to fall. And within half an hour my nice shiny clean van was rained on, then sand and dust blew over it, and a couple of big tumbleweeds boinked across the front grille. As I left the park behind I stopped beside the road and took a few pictures of those cool ‘trees’. And quickly closed the windows because that wind was blowing the rain into the van. 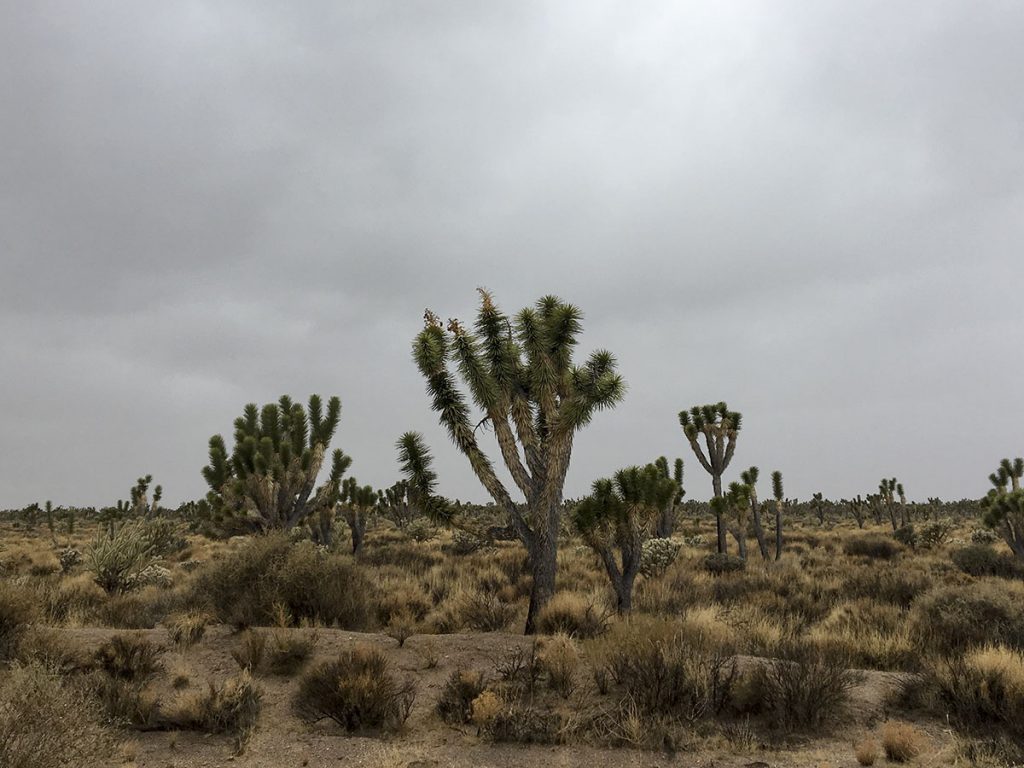 A lot of these unique Joshua trees on the first part of the drive today. 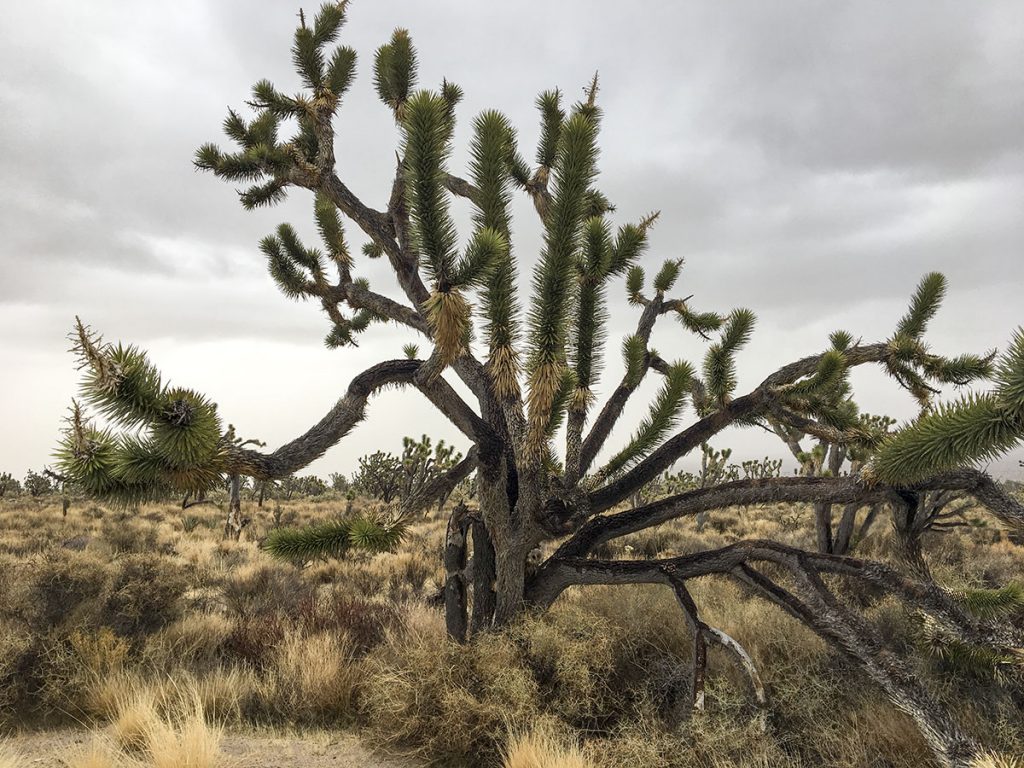 Close-up of a Joshua tree — quick before you get too wet! 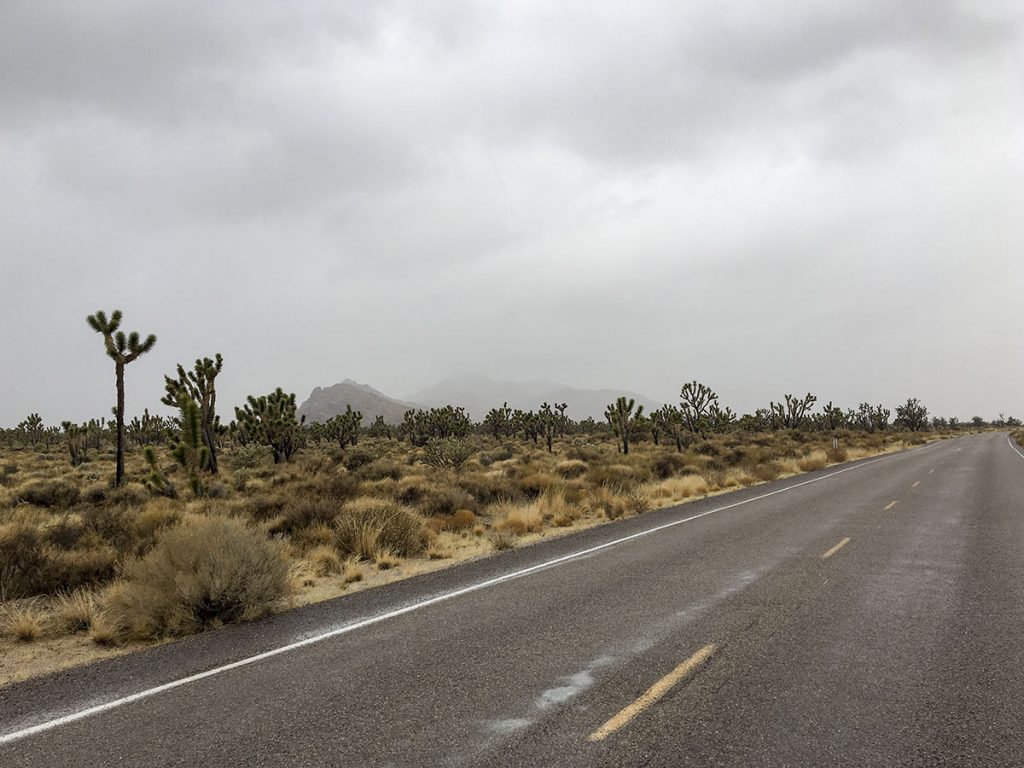 It rained pretty much all day. Sometimes quite hard, then not so hard, then hard again. So I was busy adjusting the wiper speed all day. And then I drove through the Mojave National Reserve. Narrow paved highways with very soft shoulders and occasional chunks missing on the side of the road. But not a lot of traffic. After that I turned onto the I-15 where I could cruise at 70 or 80 miles an hour.

I ate the sandwiches I’d made as I drove. It wasn’t supposed to be a long drive — I’d booked a hotel in Cedar City, Utah, just over 400 miles, about six-and-a-half hours of driving. The road got busier once we were in Nevada. All the lanes were full as I took the ‘express’ lane through Las Vegas. Then into Arizona for a bit, and up into St George, Utah. By now it was raining harder again. I lost an hour due to the time zone, but with the dark clouds and rain it felt like dusk all day!

I was almost ‘home’. It was raining hard a lot of the time — so hard that big puddles were washing across the road and buffeting the van as I plowed through them. The gas gauge showed that I had at least 50kms to spare — I would have no problem making it to my hotel in Cedar City. But I guess driving 80 miles an hour over some hilly country and motor-boating through some serious water on the road can affect your gas mileage. As I got to within 30 kms of Cedar City I started taking note of how many kilometres worth of fuel I had. The buffer was getting smaller. By the time I was 10 kms from the end the fuel gauge said I had 9 kms of fuel. But even that was going down faster than my distance left. With 4kms to go my gauge showed ZERO. Ding, ding. All kinds of lights are now blinking on the dashboard. But the van is still driving. I’ve already set the cruise down to 60 mph. And it is raining hard and the temperature now shows 2 degrees. And I sure don’t wanna go for a 1 mile walk on a busy highway with trucks splashing rain at me. I exited the freeway and the first thing on my right is a Shell station. Whew! Fill’er up!

I checked into the hotel. Lots of rooms and not many cars on the parking lot. Raining hard. I go up to my room and logon to the wifi. Ding, ding, ding. Emails and messages.

There’s one from Jim Peters — he and Bonny are on their way to Palm Desert and are almost at tonight’s destination in Provo. He says the roads are good and clear so far. But the text message is 2 hours old. When I reply I get a message back — oh, oh! Those last 2 hours of driving have more than doubled. Lots of snow and freezing rain in the high altitudes. Shoot!

I see that the Cowboys are hosting the Saints on TV — so I go out to pick up some chinese food. I’ll watch the game and eat supper in my room. But when I go outside I’m surprised to see 6 or 7 inches of snow on the parking lot. And on all the vehicles. And there are a lot more vehicles here than there were 20 minutes ago, and more are coming in off the highway. It’s about to be a miserable night. And the local news and weather on TV lead me to believe that we just might be socked in here for a few days. So much for getting home EARLY! But at least I’m in a decent place and maybe I can go see one or two movies that I haven’t yet seen, and maybe even do a bit of reading…

I eat in my room, but the idea of watching the game ends abruptly when the TV loses signal. Must be ice on the power lines. No channels are working. Luckily I have internet access. I called my brother and my mother and my daughter and Jim. Whew! busy night! After talking to Jim I decide that I will alter my route home and head straight north tomorrow. Maybe I can snivel my way home between two winter storms. We’ll see.

As I start writing my journal entry the TV comes back on. Oh good. Hopefully I can stay up late and watch some Trumpy news on Colbert tonight. Ah, but it is a momentary blip. I might be a quiet night here in Room 232. Oh well. As I always say, you have to have a sense of humour and roll with the punches if you want to be a traveler.