When I woke up this morning and looked out my window — things looked a whole lot better than they did last night. Snow was melting. Snow ploughs and sanding trucks were out. I went down for a quick breakfast. At 7:40 I was packed and loaded up and ready to hit the road. It was snowing pretty good. I packed up my stuff and went downstairs for the free “breakfast”. I made some mini-waffles, smeared them full of peanut butter and smothered them with syrup and washed that down with a coffee. 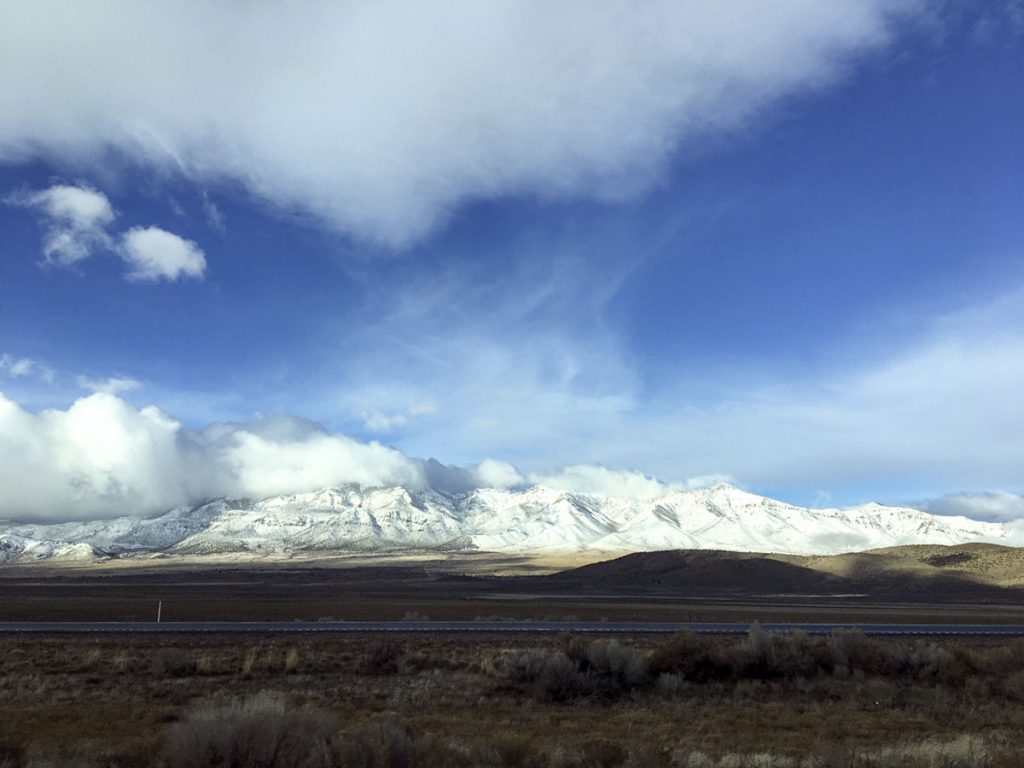 Oak City, Utah — I could see the clouds coming from the west as I was heading up to Provo. 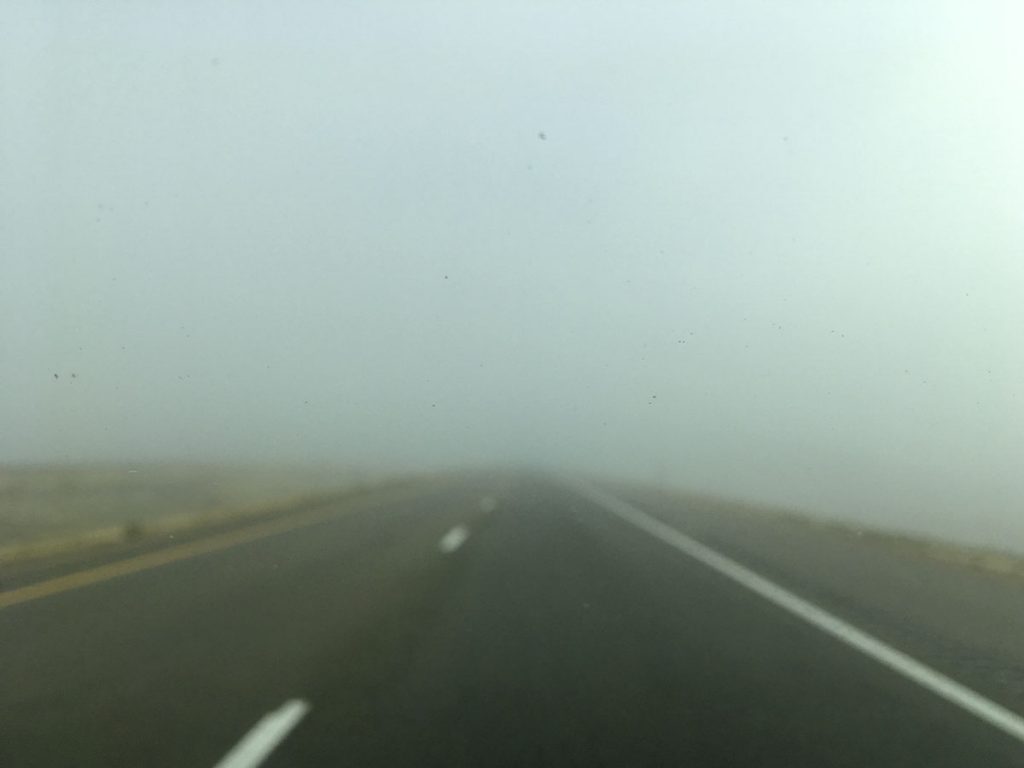 I drove through fog and a rain a few times today.

The temperature stayed between one below and one above for most of today. For the first hour or so out of Cedar City small snowflakes were peppering the van and I kept an eye on the outside temperature, wondering if that wet snow and rain would freeze and make the road slippery. But the roads just got better. I was planning on driving up to Idaho and then taking the interstate east from there all the way to Fargo. But as I got closer to Provo the sun came out. Wow! What a difference that makes on one’s outlook! In fact the weather was so much better than what I had expected, I wondered if it wouldn’t be just as good to drive home via the route I had originally planned to take. Surely by now the icy roads that Jim and Bonny had yesterday afternoon on their way through the Rockies would have melted. So I made an executive decision. Just when the sun was looking away for a minute, I deeked left, then turned right, and off I was before anyone even took notice. It turned out to be the right decision. 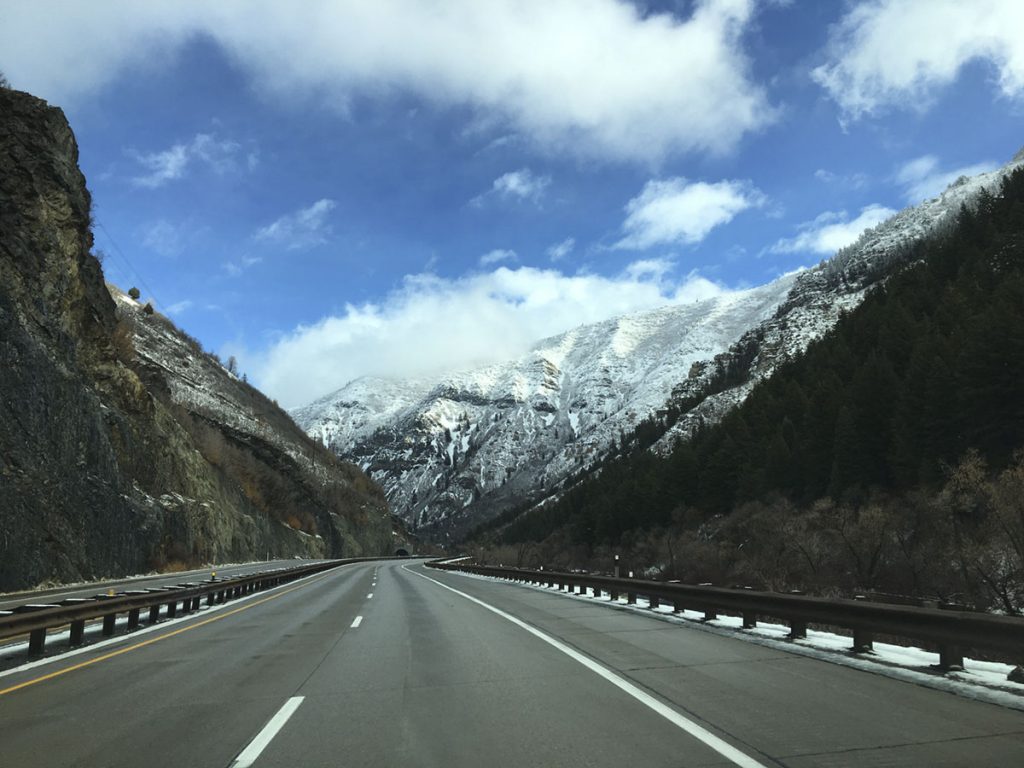 At around 10:30am, this is the road out of Springville, UT 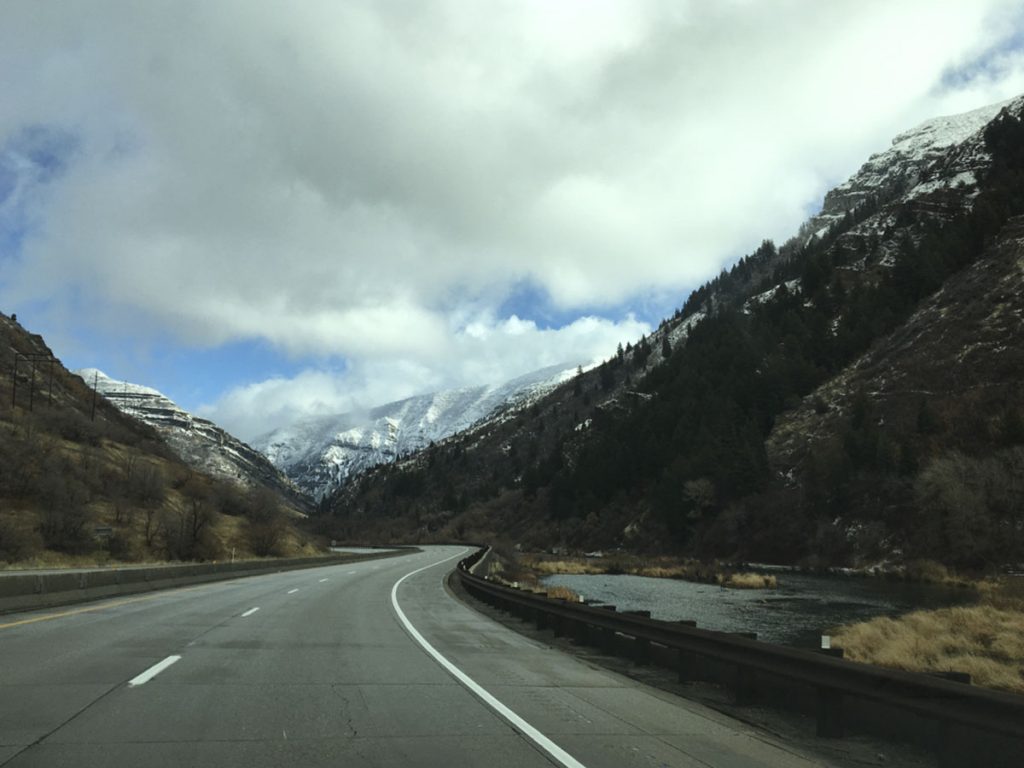 Just outside of Provo, Utah. This road was treacherous yesterday afternoon — but this morning it was as dry as it was gorgeous. 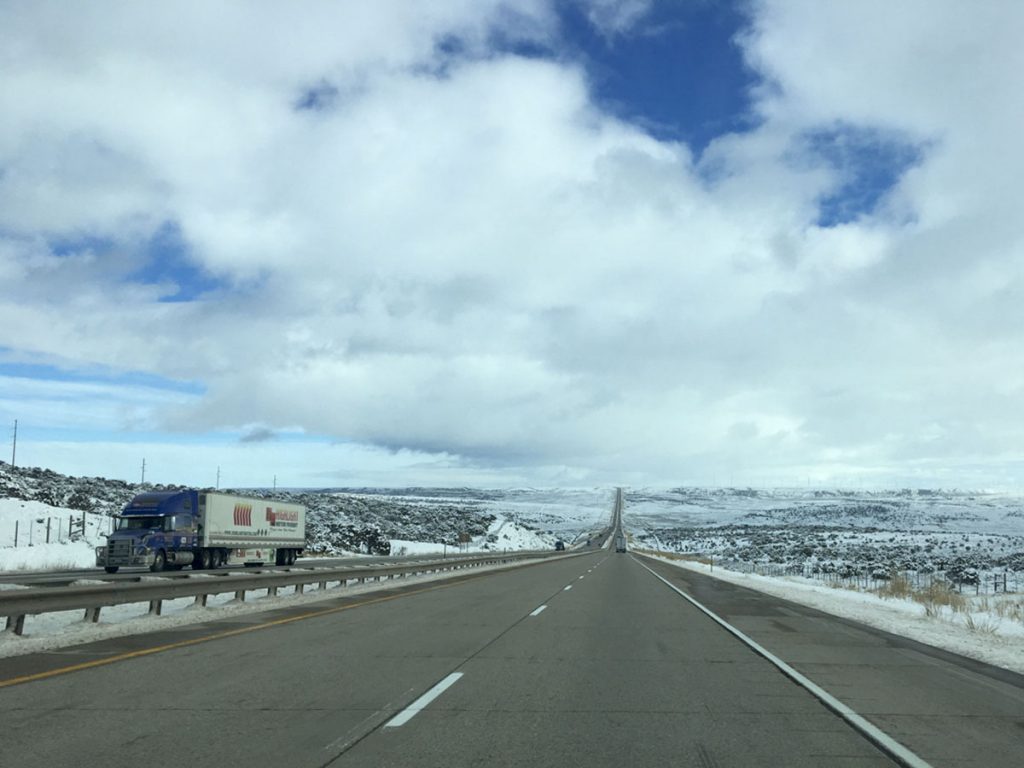 Clear road ahead, just outside of Evanston, WY. 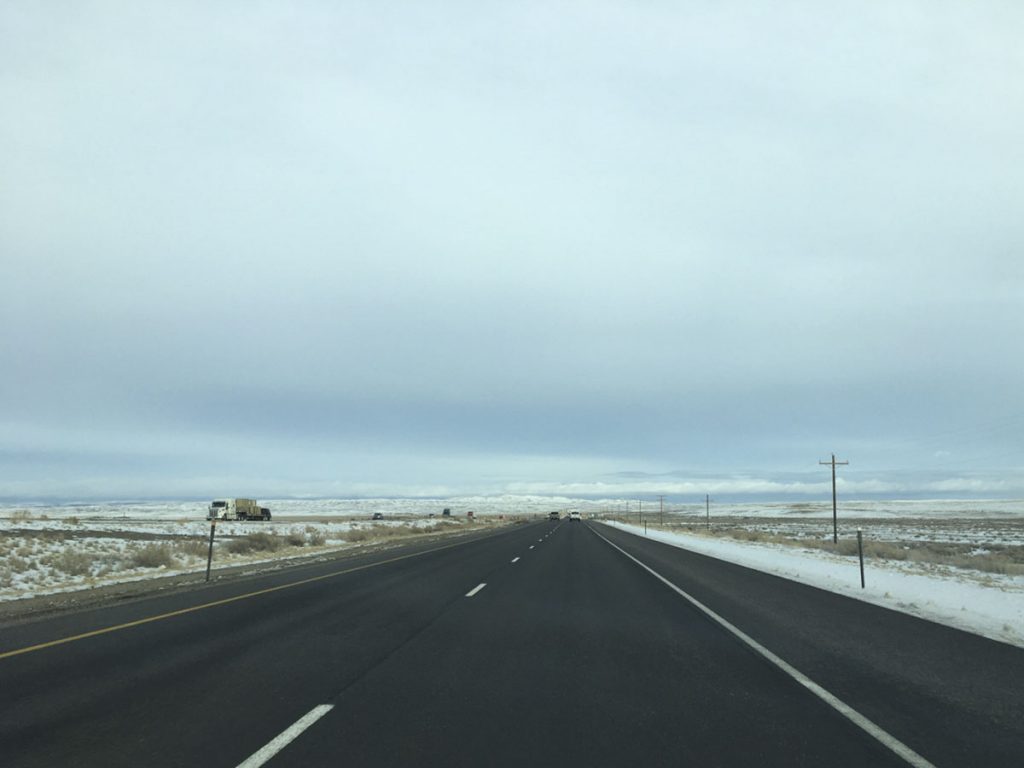 Rock Springs, Wyoming. Flat roads and divided highway for as far as the eye can see. 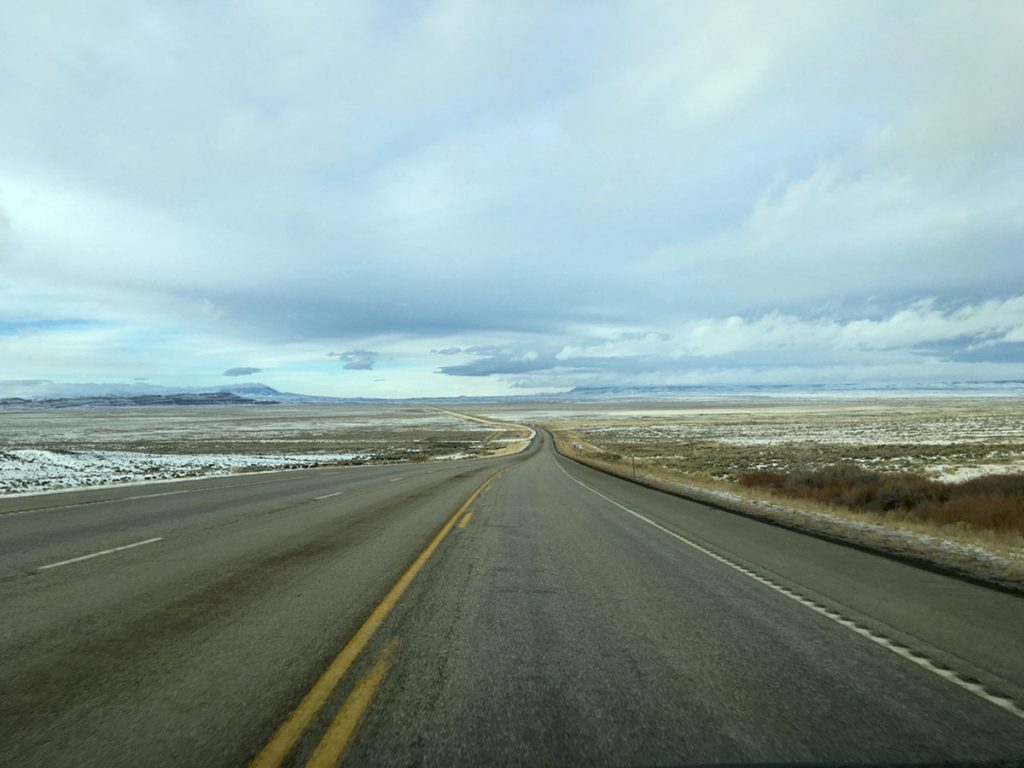 Near Rawlins, Wyoming. Mid-afternoon. Roads were dry as I headed north to Casper and Spearfish. 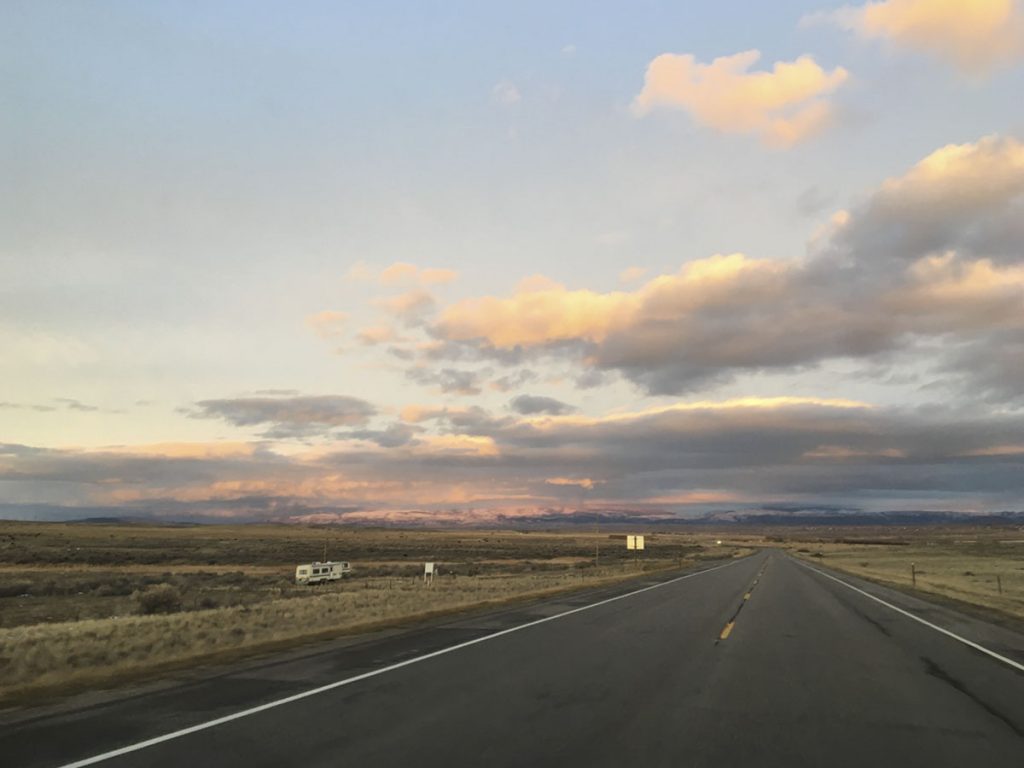 Casper, Wyoming. The sun was about to set at 4:30. I would be driving in the dark for a few more hours before I packed it in for the night.

I was a bit more mindful of the fuel gauge today. I stopped for gas and a burger in Evanston. I hadn’t downloaded an offline google map for this area because I wasn’t planning on taking this route, so I updated the new itinerary while I munched on my McChicken sandwich.

The road was flat and the sun was shining for most of the afternoon. Cruise control set for 84mph and I only had to slow down when two big semis decided to pass each other and blocked the passing lane. I had my old iPod going full-time, and by the time I stopped for the night I was a little hoarse from singing loudly all day!

In Rawlins I turned north, off the Interstate 80, and headed up to Casper, Wyoming. It was 4:30 and the sun was setting. I would be driving in the dark for a few hours today. As the light was dimming, I noticed a lot of deer on the sides of the road. It’s that time of the day — better be watchful in case they decide to jump into my path. It was in Rawlins where, as I drove through the downtown, I saw a big buck slowly walking across the road and onto the busy parking lot of a ‘Dollar General’ store! (I wondered what you could get for a buck at a ‘dollar’ store!)

I got on the I-25 and continued north for a couple of hours. It was raining full time now. My headlights were dirty and not very bright. I was happy to tag on with a car ahead so I could watch the taillights and anticipate the turns ahead. There wasn’t a lot of traffic so we both made good time until we got to Gillette, where the road meets the I-90. I needed to send a text home to let Alex know where I was, etc. So I pulled in at another McDonald’s for some free wifi. Connected with home. All good.

I hadn’t made any reservations for a hotel because I wasn’t sure where I was going to end up. I thought I would try for Spearfish, South Dakota. But when I looked at the map again I saw that Spearfish was a bit of a detour from my ideal route homewards. And there had been a number of flashing signs on the road, warning that the coming snowfall would make things slippery starting at 11pm and lasting until 3pm Sunday. I decided that the farther I got today when the roads were wet but not slippery, the better off I’d be tomorrow.

I turned north off the I-90 before it reached Spearfish and drove up to Belle Fourche. I checked in at the first hotel I spotted. I parked the van. It was getting colder and the rain was not letting up. Yes, they had room. Yes, they would give me a room upstairs that was “pet-free”. I was happy and tired. I was going to write my journal entry, but by the time I looked at all my “windshield” photos from today’s drive, I couldn’t keep my eyes open. I would write my journal in the morning.