I woke up at 6:30. No alarm — usually I wake up at 5:30 and then lie in bed waiting for a more reasonable time to start the day, but this night I slept through and when I opened my eyes for the first time and spotted the time on the microwave I jumped out of bed. I showered, wrote my journal entry for yesterday, and then packed up my stuff and went out to the van. I decided to skip the hotel breakfast — I would stop and pick something up along the way. The parking lot was ice. So was the highway. I gently drove back to the gas station I’d passed on the way in last night and filled my tank. I didn’t need any extra excitement on my drive today. 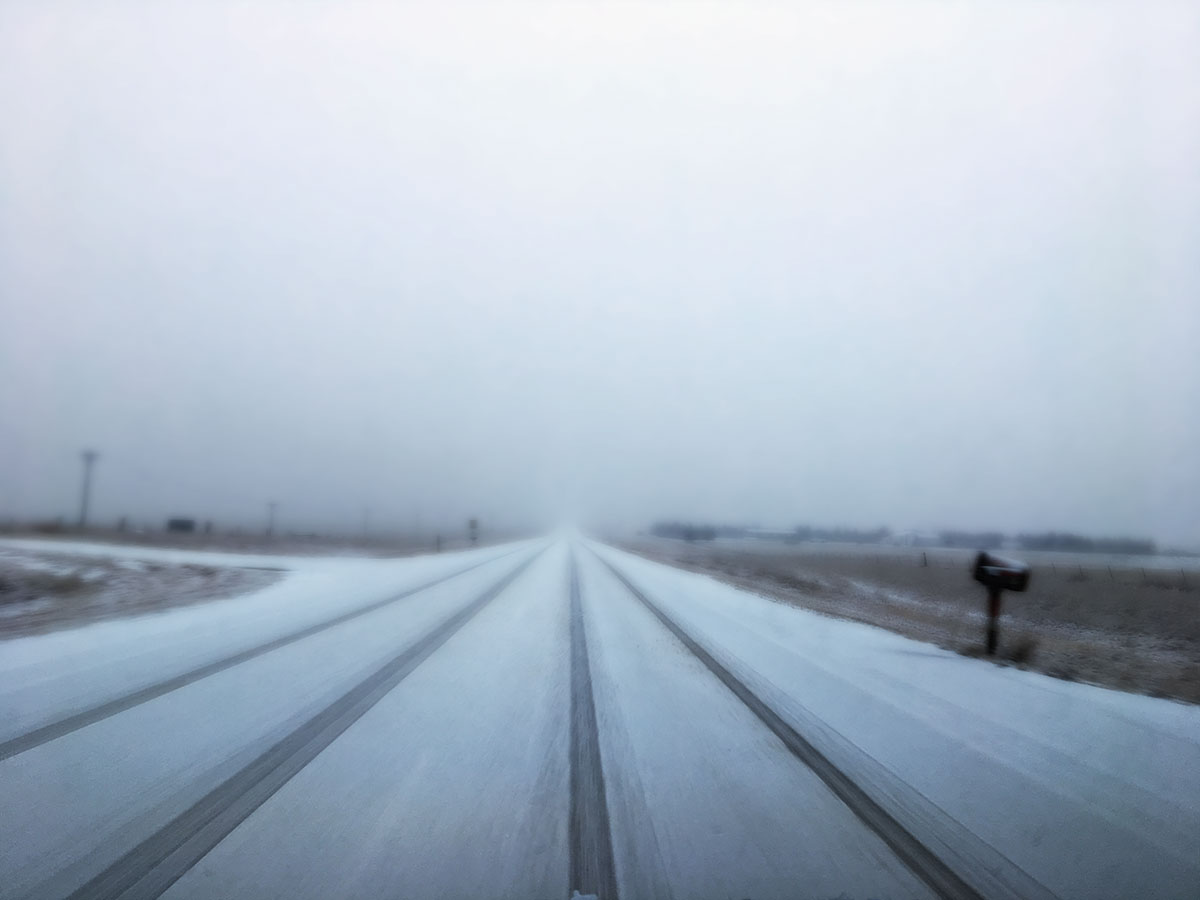 Tracks in the snowy road led me out of Belle Fourche, SD.

As I pulled out of town the snow was falling. It looked like a couple of inches had fallen during the night, but according to the weather reports much more snow is expected today. I followed another car’s tire tracks and slowly and carefully started on my way. I was going about 70 kms/hr. At this rate it could be a very long ride home!

After about 15 minutes I caught up with that car making tracks ahead of me. Now what? Do I follow at a slower pace or do I pass. I carefully passed the car. There were not many cars on the road. Half an hour later a snow plough came from the opposite direction. As soon as it had passed I moved over into the oncoming lane and drove in that lane for about an hour. I had to focus on the road ahead — it was snowing and a bit foggy, and now I had to make sure I saw oncoming traffic and that I moved over into the right lane when we met. I think it was a good thing that today was Saturday. The radio was announcing all the cancellations — very few playoff football games were going to be played today! So there weren’t a lot of us on the road. As long as I stayed out of the ditch, that would be a GOOD thing.

Just when I thought I was the only one driving today, an oncoming cop car came over the hill and turned on its flashers. I pulled over and got my registration out. I knew I had been speeding. I was coming down a hill and I wasn’t watching the speedometer. The policeman came up on the passenger side. I opened the window. “Now where are YOU going in such a hurry this morning?” Well yes, you see, my van only shows kilometres and I know I was going too fast and I’m so sorry. “You know we are under an extreme weather watch today, right?” I know — it won’t happen again. And with that, that nice policeman told me to buckle up and drive safely. Whew!

After driving for about 2 hours, the road seemed to improve. There had been ploughs out and that really made a difference. I think I reached the I-94 (which would take me all the way to Fargo) after about 4.5 hours of ‘hairy’ driving. Once I got on the divided highway I enjoyed the driving a lot more. The interstate was just on the northern edge of the big snowstorm; South Dakota and southern North Dakota were expecting the brunt of the storm. Because of the big storm to the south, and it being a Saturday, four-lane interstate had less than the average number of cars and trucks on it today. That made me feel a lot more comfortable driving. Sure, I encountered quite a few foggy patches and intermittent rain, but for the rest of the day I drove just over the speed limit — you know, just enough to NOT get stopped again — and made good time. 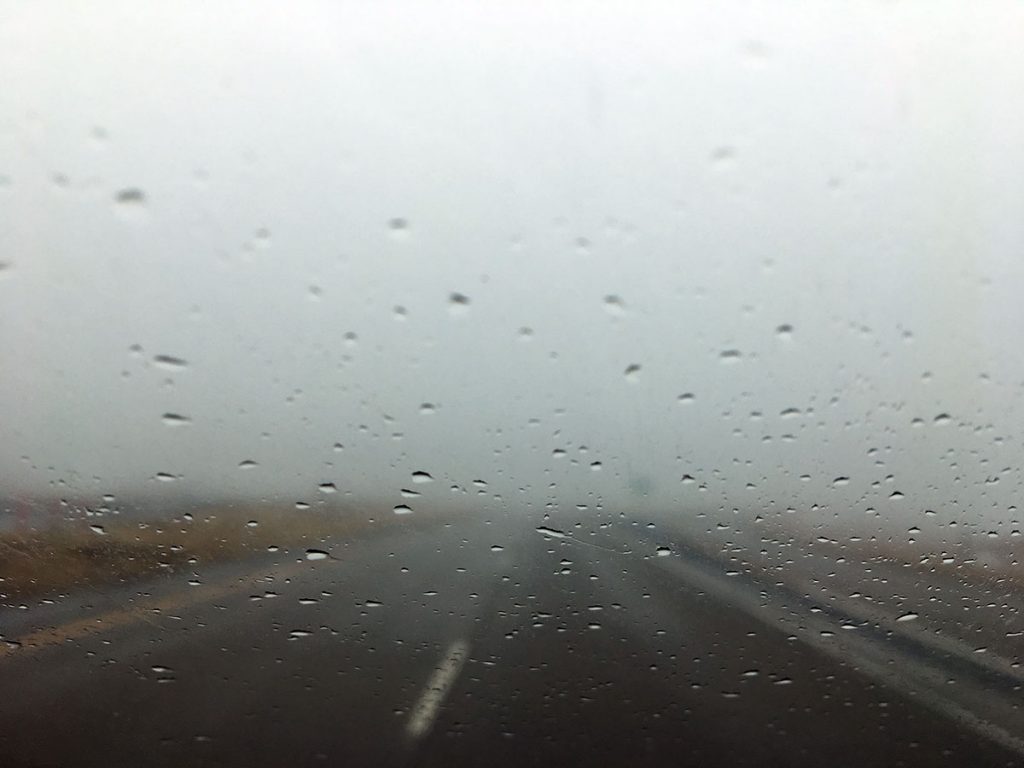 Intermittent rain and fog on the I-94 for most of the drive from Dickinson to Fargo. 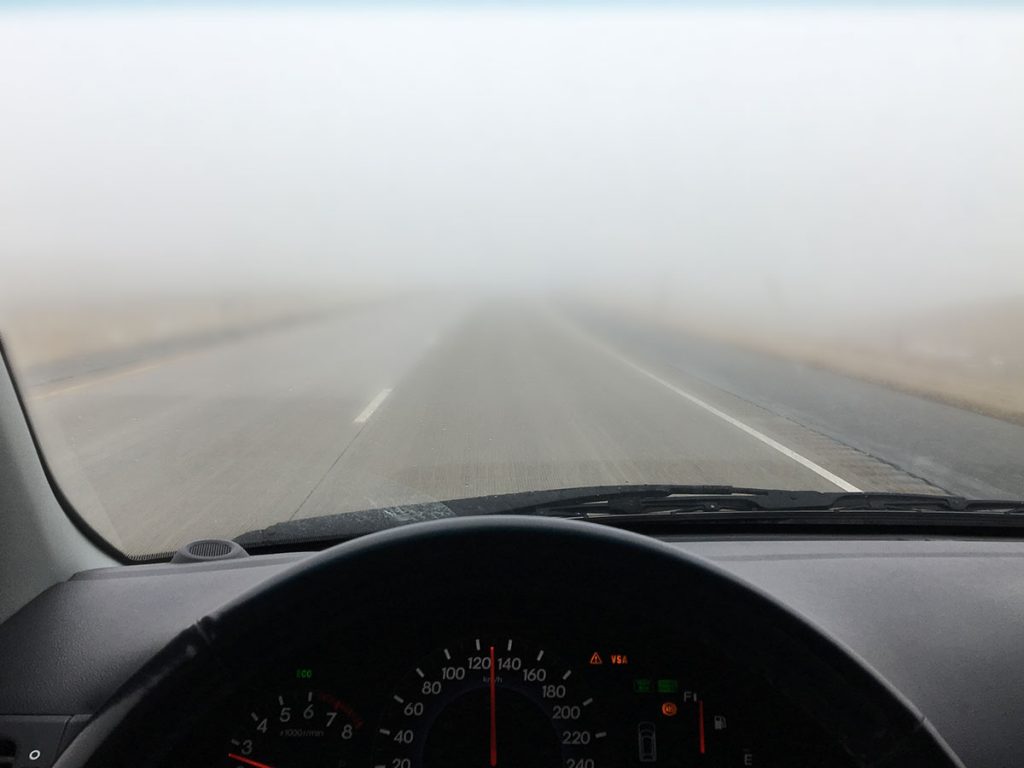 Foggy road ahead, but it wasn’t really slowing me down!

I fueled up again in Dickinson and had a sausage-and-egger and a black coffee. No time to lose. It would be a long day, and I’d lose another hour due to the time zone to boot.

In Fargo I stopped to refuel again. (The gas is by far the cheapest in North Dakota!) By the time I got to Grand Forks the sun was down. Two hours later I was at the border. The customs guy asked me for an inventory of what I was bringing into Canada — and then waved me through.

A little after 7:00pm I was at the co-op gas bar in Steinbach. One last fuel up. Wash the van. Go home. The heat’s on. Bread, cheese, sandwich meat, and fruit is waiting on the counter for me. So is a month’s worth of mail. But there’s a Jets game on tonight!

I lugged my stuff into the house. Then I made myself a cup of instant soup and poured myself a glass and sat down to watch the Jets win in overtime. Welcome home!