Another trip, and so another online journal about it!

After a miserable weekend at home, suffering a brand new cold (probably not helped by all the snow-shovelling I did), I was a bit concerned about how I would handle the 4-and-a-half hour flight to Cancun on New Year’s Day. I was packed and ready to go by 6:30am. Speaking of packed and ready to go, I had packed everything I would need into my golf bag and a small backpack. On Monday afternoon Robert D stops by with a luggage scale — and lo and behold, that big heavy golf bag weighed just over 20kg. The Transat Air website spelled out that ONLY golf equipment would be allowed in this oversized bag — and gave specific limits for clubs, balls, and shoes. I was counting on that NOT being an issue.

So I left Steinbach early Tuesday morning. The temperature was minus 30. I couldn’t breathe through my nose and I had a headache. I drove to my sister Irmy’s house and picked her up. She would take the van back to her house and then go back to the airport next Sunday to pick up the kids when they return from their two-week vacation. They would drop her off and then take the van back home to Steinbach.

Check-in went way better than I’d expected. No problem with the bag being just a bit OVER the limit, and no problem with all the extra clothes and shoes I had packed in there. I got a window seat next to a young couple and tried my best not to cough or sneeze in their general direction. I think I snoozed a bit on the flight.

When we got to Cancun I disembarked and more-or-less walked straight to and through customs. As I entered the baggage hall a woman was just unloading my clubs from the oversize chute. I walked out into the warmth of the Yucatan. I passed a very long line-up waiting to buy bus tickets from the ADO bus ticket counter. I had read that I was better off buying tickets out where the busses are — and getting on the next available bus instead of waiting for the one I bought the ticket for. But when I got to the ADO bus parking lot I was told they had no tickets for sale there and that I would have to go into the terminal to buy my ticket. I whined a bit, and asked them to please not make me drag my (very heavy) golf bag all the way back into the terminal and stand in that long line. And one of the bus drivers had pity on me and said hop on. His bus was actually heading to Merida (where I will be going this coming Sunday) but he explained that he would be making a stop at Terminal 2 (we were at Terminal 4) and there I could buy a ticket (122 pesos, or about $8.50) right at the curb and hop on the next bus going south to Puerto Morelos. And it was so. In fact, while I waited the 6 minutes for my bus to show up I chatted with another tourist who had been given quite the run-around and now finally bought a ticket to Puerto Morelos as well, but his departure time was 45 minutes LATER than mine! Poor guy.

My bus dropped me off at the bus stop in Puerto Morelos. Taxis were waiting to take us to our various hotels. I hopped into the first taxi and for 35 pesos ($2.50 Canadian) I was delivered to my little Airbnb apartment near the beach. Easy trip here and quite a bit cheaper than the $80 shuttle service lots of tourists take from the airport.

My apartment was just like the website said it would be. Small, but clean and in a decent location. I on the other hand was feeling miserable. I opened up my big golf bag and found a pair of shorts. I may not put my long pants back on again until the day I fly back home. 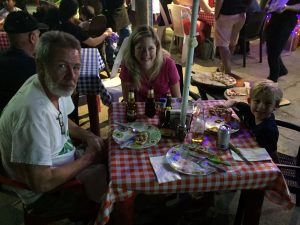 I sent a text to the kids, telling them I’d arrived and gave them the address. Less than half an hour later I spotted them walking up the street. Their taxi had dropped them off at the corner. It was great to see them, and especially Max (who is the happiest and most joyous person in the universe and who’s love for me is matched only by mine for him). He is having a GREAT holiday, loving Mexico, hanging out with mom and dad every day all day! We scouted out my place — big backyard with a hammock and swings and chairs under the shade of a thatched roof. And then we took a walk around the neighbourhood. It’s half a block to the big central square. An OXO grocery store is just at the corner. We went around to the next block and got a table right on the street at a large and very busy pizza joint. We had to wait quite a while for our two large pizzas, so we had lots of time to catch up and hear about all the adventures the kids have had in the last week and a half. Turns out that one pizza would have been sufficient. I took a box of leftovers home.

I was feeling terrible — I couldn’t breathe through my nose and the flight had really buggered up my ears which were still feeling plugged. So the kids wished me a good night and caught a taxi back to their hotel. I fell into bed — it was before nine o’clock. I woke up occasionally (mostly to blow my nose!) but didn’t get out of bed until noon the next day.