We woke up at around 8, although I was up from 4 to 6 at night. I think I’d fallen asleep at around 9:30 and was finished sleeping by 4. So I sat in bed and looked at my computer screen until 6.

Sue had made an instant coffee but I got into the car and headed out to “Macca’s” to pick up a “cuppa” and some “bikkies”.  The Kiwis have a silly abbreviated expression for just about everything. The call 4x4s “utes”. Eggs benedict is “bennies”. A sandwich is a “sammy”. “Tea” is actually dinner. And a “cuppa” is a cup of tea. The corner store is called a “dairy”. And many of their expressions are not SHORTER than saying the full word — they’re just dumb! For example, Christmas presents are called “chrissy pressies”.

Anyway, I went to McDonalds to pick up a couple of coffees and some biscuits (egg McMuffins).

We packed our bags and said “cheerio” to Kaitaia, and headed south on the Number 1 highway. The drive down to our next motel was just over 200kms, but we had decided to take the longer and more winding coastal down the west coast and soon turned off the main highway to State Highway 12. This route was supposed to take us 4 hours, but that didn’t include a couple of missed turns and wrong turns along the way.

Our lunch stop was in Opononi. The little village is at the mouth of the Hokianga River. There were a couple of cafes to choose from. The view from there was really quite stunning. 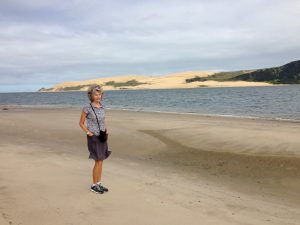 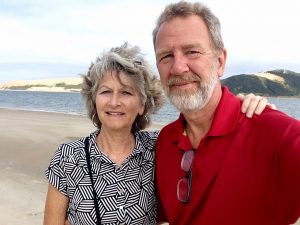 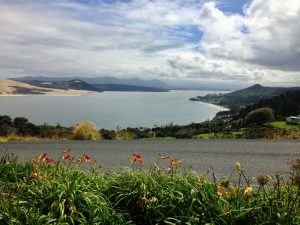 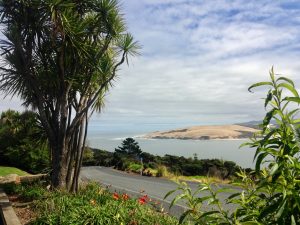 We continued on our way. The drive was VERY winding, up and down and mostly DEEP in the forest. The vegetation, especially with all the king ferns that New Zealand is famous for, looked ‘tropical’. At one point we came around a series of sharp bends in the road and there were several big white buses and lots of cars parked along both sides of the road. What’s this? We gotta stop and check it out.

And so we pulled over to the side of the highway, parked the car, and ran across the road to where all the school kids who had come out of the big white buses were lining up. It was the entrance to the Waipoua Forest, home of the world’s largest and oldest Kauri trees. We got into line. First we had to scrub our shoes on a floor brush, then we had to spray some kind of disinfectant on the soles of our shoes and walk through a mat that was soaked in disinfectant. Wow, those Kiwis sure are keen to protect their forests! We walked a short way into the forest on a big wooden boardwalk. And there it was — a HUGE tree towering over the tops of all surrounding trees. My photos don’t do it justice — so of course I took too many. I guess I was hoping one of them might help show the overwhelming size of that tree. 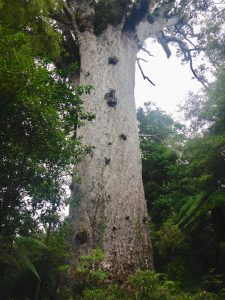 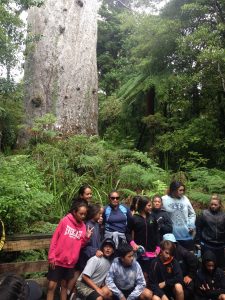 One of the groups of school kids at the site. 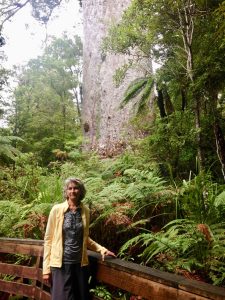 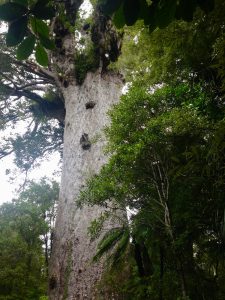 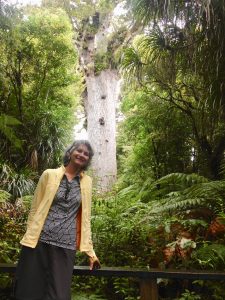 This is the largest known kauri tree in the world and estimated to be 2,000 years old. Standing at over 51 metres high, it has a girth of nearly 14 metres.

We continued on our way, stopping in Dargaville for an ice cream cone before arriving in Paparoa. We parked in front of our motel and checked in. Hmmm… The hotel is an updated and renovated OLD hotel that’s been here for many years. Our room is small. But the kitchen here must be very good — the bar and the restaurant are large, lots of tables, and lots of customers! 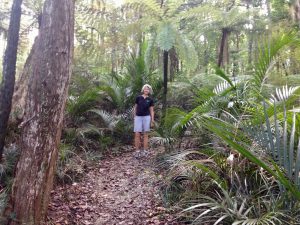 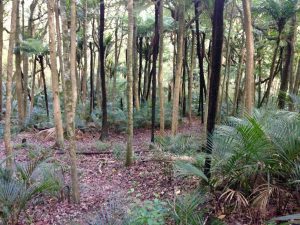 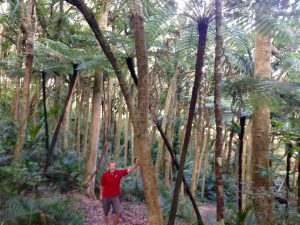 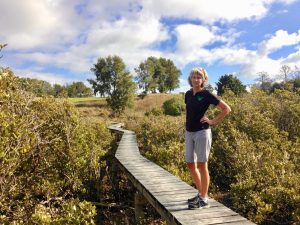 After a quick refreshment we asked the woman at the desk about ‘a walk’. Oh yes, there is a ‘bee-utiful’ walk just down the road. We followed her directions and soon found the entrance to the Kauri Bush Walk. The hour-and-a-half walk led us through a farmer’s cow pasture and then took us past a pre-colonial historic Maori Pa that is estimated to be more than 250 years old.

We got back to our motel, showered, and went to the restaurant for “tea” (dinner). The restaurant wasn’t full when we sat down at our table, but it was packed by the time we finished our steak and lamb dinners. Whatever our room lacked, the restaurant made up for it!

When I went to pay I was informed that if we didn’t need the chef to come in and cook breakfast for us tomorrow morning, could we please bolt and lock the door to the building on our departure. Apparently the owner is in hospital in Auckland and they are a bit short-staffed! Small town, small-time motel. Real estate write-ups would call it “charming”.