Today we drove up to the northernmost point of New Zealand, Cape Reinga. The end of the road here in New Zealand. I’m not sure what the point is — we didn’t go to the SOUTH end of the country so what’s the big deal about going to the north end?

We left Paihai at around 10 and although we had planned to stop along the way and eat our lunch, we ended up driving until around 1 o’clock, all the way to Cape Reinga. The road was good, winding and narrow, but not a lot of traffic. But there really isn’t very much up along this narrow strip of land. Lots of tourists opt to take a bus excursion which takes them to the Cape but also drives along the “90 Mile Beach” for part of the trip.

Along the way, Sue and I talked about our time here in New Zealand. What we liked, what we didn’t like. What we’d do differently next time. It’s not at all a surprise to us — we predicted that it would be like this — but by far our best time here in New Zealand has been the 5 weeks we stayed in Napier. After that, the South Island was sort of anticlimactic. And the area that we’re visiting now, north of Auckland, feels even less interesting than the South Island. Maybe it’s because we’ve been here for 3 months and the novelty of the beauty of the countryside has lost its impact. It’s still a gorgeous country. And for sure it’s that we’re nearing the end of our time here and our thoughts are about the NEXT stage of our life and the transition back into the routine that is our daily life at home. (The photos on SteinbachOnline of dead trees surrounded by piles of dirty snow and flooded streets at home should make us more appreciative of what we have here.) All that, and we still have ANOTHER little adventure coming up before we go home — but both of us are not at all excited about a week in the Cook Islands! I think we need an “attitude adjustment”.

We pulled into the car park at the Cape and walked through the gates along the path that went out to the famous lighthouse at the northern tip. The sun was peeking through the clouds, the temperature was comfortable, and the scenery was excellent. But because it was already one o’clock and because Sue makes great sandwiches, the lighthouse was the SECOND best thing about our stop at the Cape.

After we’d eaten our lunch we followed the other tourists, many of whom came via one of the many big tour buses that were lined up in the parking lot, down to the lighthouse. 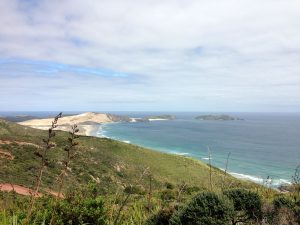 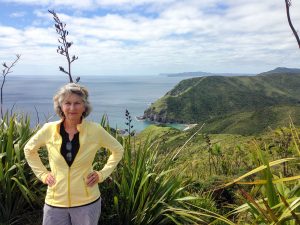 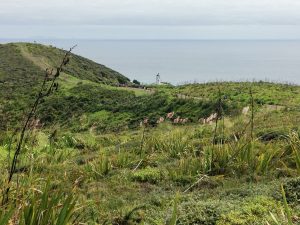 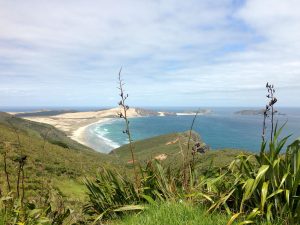 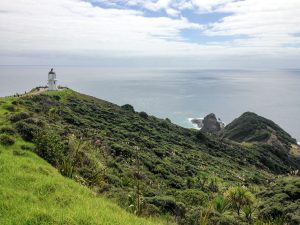 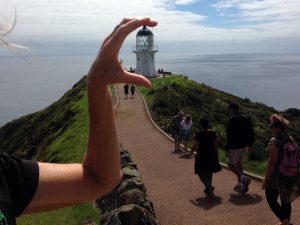 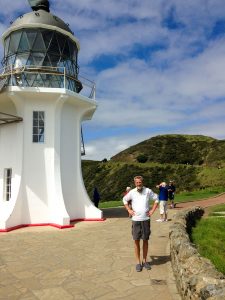 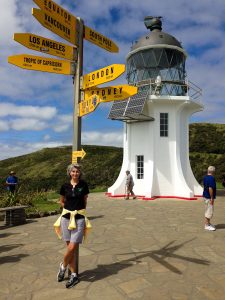 After the obligatory photos to “prove we too had ‘been there'”, we got back into our car and proceeded to retrace our route right back on the only road (#1) on the peninsula. About 15kms south of the Cape we pulled off the main highway and took a 3km side trip along a gravel road down to the big sand dunes on the west coast. We parked the car and started out to the dunes. There was a camper parked near the washrooms which offered ‘sand-surfing’ boards for rent. Hmmm, not today. But we left our sandals under the camper (we would’ve ended up carrying them up and down anyway) and started walking up the dunes. The temperature and the partly cloudy skies made for a pleasant ‘climb’ up the hill. Sue aborted the trip a quarter of the way up and said she’d wait for me there. I plodded on. Once I reached the first level area I could see the expanse of ‘desert’ reaching all the way to the sea. The wind was now a factor, blowing sand into my eyes, the effects of which were aggravated by the fact I wear contact lenses. There was an even higher dune ahead. I headed for it.

When I reached the top of that dune the wind was blowing quite hard. But the view from up there, through my squinting eyes, was worth the climb. I took a few photos and then started back down. Just like the walk on the dunes in Namibia a year ago, going down was really no problem — just take big steps and let the deep sand ‘swallow’ each footstep. 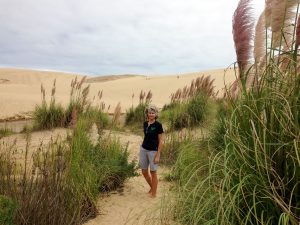 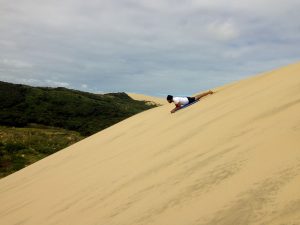 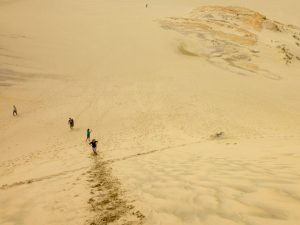 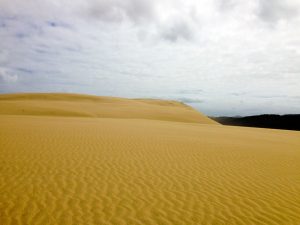 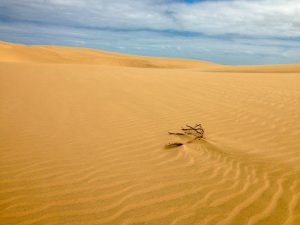 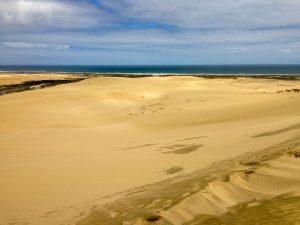 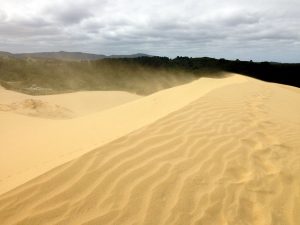 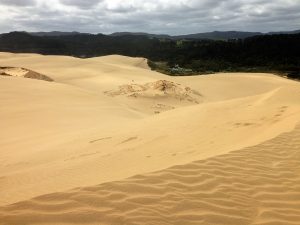 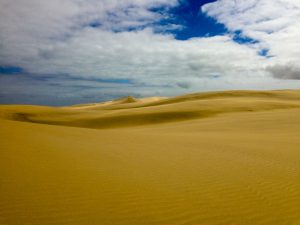 We picked up our sandals, and tried to dust ourselves off before getting back into the car. I had sand in my eyes, ears, hair, even crunchy granules in my teeth!

We drove south to the town of Kaitaia, where we’d booked a motel. Our ride was made a little more interesting by the fact that the fuel gauge in the car showed empty for the last half of the trip — and the lack of services along the route made running out of gas a less than pleasant prospect. But, as Sue announced during the ride, “nothing to worry about!” We made it.

We stopped to replenish our libation supply at the first (and only?) grocery store in Kaitaia and fueled up the car. We checked into the hotel. Happy hour and a shower. And then out for supper.

We went down the street to the Beachcomber Restaurant. Scallops for me, duck liver pate for Sue. Yeah, that’s something we don’t eat a lot of at home. We’d better hurry up and appreciate what it is we’ve got here — it will end soon enough!