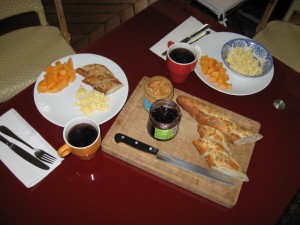 Not a lot of action here on another lazy Saturday. Got fresh baking from the corner bakery to go with the scrambled eggs Sue made. I worked on a web project all morning while Sue played on her ipad. It was almost noon before we finally went out (another fine sunny day here) to check out the big flea market just around the corner from our place. 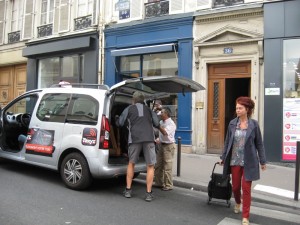 Everything seemed to be going a bit slower on this Saturday — maybe that’s because too many people were out partying way too late last night. As we were walking along Rue Martyr street, a one-way going north, we saw a long line of traffic, led by a big city bus, all waiting because a small van had stopped ahead of them and was blocking traffic. The driver of the little minivan had stopped to pick up some flea market furniture — and was having trouble fitting the table and chair into his car. So went to help him while the line of traffic backed up even more, and the bus driver was gesturing and honking and complaining. No panic! We’ll just make sure that we load our items properly and that we can close the back hatch, and then we’ll drive on. 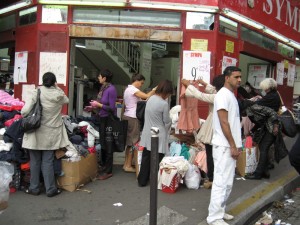 Eventually we made our way up to Blvd. de Rochechouart, the big road just north of our street. Here both sides of the street and the center boulevard we lined with little booths selling ‘junk’. And it was mostly junk. It reminded me of Thursday morning garage sales on Granite Park. Far too many people, buying junk that the MCC Thrift Store wouldn’t even bother pricing, so that they can sell it at THEIR garage sale next summer! Rue de Steinkerque, the little street going up to the big white church, is famous for selling discount name-brand designer clothing. Boxes and boxes of it. By the time we were there most of the boxes had been gone through several times and there were slim pickin’s for the mom’s looking for bargains.

We went home and had lunch and a Skype with Alex and Max. Read a bit.

Went out for supper at the little restaurant across the street at the Hotel Amour. We were lucky to get a table (there was hardly anybody in there when we walked in, but I guess we must be a real draw because by the time we had read through the menu the place was packed). After supper we went back to the apartment and watched another one of the collection of DVDs here. Tonight’s movie was “Two Days in Paris” (2007), and it was quite funny and quite good (and in English).

Went to bed late (after 1:30) but there was still plenty of action on the street outside our window.