With ALL of Sue’s iPad weather apps now predicting rain for a couple of days at the end of this week, and with the sun already shining gloriously into our window as we ate our fresh pastries for breakfast this morning, there was nothing to do but to get off our butts and go see the sites of Paris. Still on Sue’s list: Bois de Boulogne, a large park in the west of Paris. And we should cycle in the park. Better yet, how about if we rent a couple of the Vélib’ bicycles that are available all over Paris and ride them to and in the park! Okay, I’ll ‘google’ it and we’ll be off shortly.

We were out of the house by 1:30. We were going to rent the bikes just around the corner from our place, but all 20 or 30 bikes that are often locked into their stands there were out! Okay, we’ll walk towards the metro and if we see some Vélib’ bikes available along the way we’ll do that. Isn’t that how it usually goes? You see bikes available ALL THE TIME, until you actually want to rent one. We ended up taking the subway out to the park.

Once there we found a bike lot FULL of bikes. We punched in our codes and soon we were circling around the roundabout on our bikes, looking for an exit sign that would lead us to the park. We carried our jackets in the bike carriers. The park is criss-crossed with walking and cycling and horse-riding paths but not a lot of signage. The park is supposedly crowded with hikers and bikers most weekends. Not so today. Today the park belongs to dogs. Dogs everywhere! Some on a leash, many not. Sue and I felt like we might be the only ones not accompanied by a yapping hound. I had read somewhere that Parisians prefer having their dogs shit on the sidewalks (which they do!) and that the parks are relatively free of dogs. That is not true; they take their dogs to shit in the park too.

The deal with the Vélib’ bike rentals is that the bike is free for the first 30 minutes, 1 Euro for the next 30 minutes, 2 Euros for the next 30, and 4 Euros per half hour after that. The system encourages you to go on 30-60 minute rides, but not to bugger off for the whole day. We cycled around for just over an hour and then returned our bikes to a bike station. We went for a short walk to another bike station and took out bikes again. We cycled around some more, getting lost, checking the map, through the bush, past the big lake, and whew! there’s the entrance we came through earlier and the bike station. We returned the bikes and decided to walk back home.

The way home led us to the Arc de Triomphe. When we got there I could see people at the top of the famous landmark. We decided to check out the view of Paris from the big arch too. We lined up for tickets and then climbed up the nearly 300 stairs to the top. The view was great. We walked all around, looking at the Parisian skyline. We could see the Sacré Coeur church on the top of the Montmartre hill (near our apartment). We could see the Eiffel Tower. We could see the skyscrapers of the commercial centre of Paris. We took some photos.

We wound our way down the spiral stairs again and then walked along the Champs Elysees boulevard. 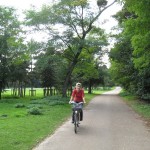 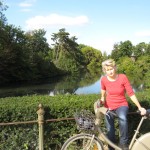 Sue, with a Vélib’ bicycle, which we rented to cycle in the Bois de Boulogne Park. 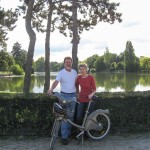 Rudy and Sue in front of one of two large lakes in Bois de Boulogne, a large park in western Paris.

The Arc de Triomphe on the Champs-Ã‰lysées. 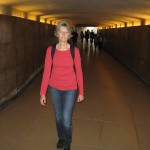 Sue walks through the underground tunnel that leads under the large traffic circle to the centre, from where we could climb the stairs to the top of the Arc de Triomphe. 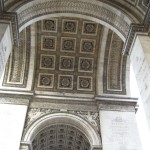 The ceiling of the Arc de Triomphe. 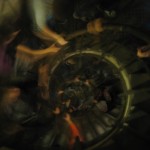 Once we’d bought our entry tickets, we had to climb 284 steps to the top of the Arc de Triomphe in order to get a breathtaking view of Paris. 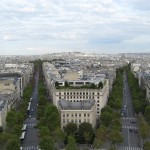 Looking to the northeast from the top of the Arc de Triomphe we could see the white towers of the Sacre Coeur atop the Montmartre hill, close to our apartment. (right in the middle of the photo) 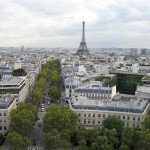 View of the Eiffel Tower from the top of the Arc de Triomphe.

Looking to the west from the Champs Elysees, you can see La Grande Arche de la Défense ahead, surrounded by skyscrapers in the Paris business district. 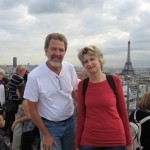 Rudy and Sue at the top of the Arc de Triomphe, with the Eiffel Tower in the distance.

Walking along the vibrant and busy Champs-Ã‰lysées (pronunciation: ‘Tante Liese’), doing my best to follow Sue through the throngs of shoppers, stopping suddenly and randomly to look at something in the window of one of the many high end shop windows (Zara, Louis Vuitton, Hugo Boss, Lancel, etc) I was reminded of our honeymoon in London. In fact, it was 36 years ago tomorrow that Sue and I got married. And as I recall, it was on that honeymoon in London, England where I made an observation: it’s better for Sue and I NOT to go shopping together. I remember trying to walk in the shopping district of London and regularly bashing into Sue when she stopped to look at something that interested her. No brake lights, no warning. Kaboom. And here we are, 36 years later, still bumping into each other, literally. You’d think that after all these years together I’d have learned better.

We stopped for a beer in one of the many sidewalk cafes on the boulevard. Sue suggested we walk home from there — it’s only about 4 or 5 kms. But my feet were sore and I was now eager to try cycling in the streets. We stopped at a bike station and rented two bikes again. The difference between walking and cycling in a big city is that when you walk you can stop and read the little blue street name signs on the buildings located at street corners. You can look around and even stop to look at your map. When you’re cycling you have to watch out for pedestrians, for cars and taxis and buses, for each other (making sure you BOTH zipped through the intersection before the light turned red). We got a little lost and eventually stopped on the sidewalk and checked the map. And we got home in time to check the bikes in at the neighbourhood parking lot within the free half hour.

Sue made supper while I deleted blurry photos from my camera. After supper we had a second glass of wine and put our tired feet up. We were planning to watch Season 1 of Downton Abbey but discovered that Peter’s DVD is missing disc one of the 3-DVD set. Hmmm… Well, I can download the series in iTunes and we can watch it on the computer. Good idea, especially considering that the iPad says it’s going to RAIN for the rest of the week! So that’s the plan.