Hey, what’s this? I wake up, make a nice cup of coffee and put in a new pair of contacts, open the curtains so I can see the garbage truck that we hear every morning, sit down on the couch, put on my reading glasses and open up my laptop — and the first thing that pops up is a ‘reminder from Yahoo!’ Happy Anniversary, Rudy and Sue. I don’t even use my old Yahoo! account anymore. How nice that they still think of me and take the time to send me a friendly note like that.

Yesterday I said something about how difficult it is for me to walk with Sue when we are on a crowded shopping street. But it isn’t entirely Sue’s fault. No, there is an even bigger chance that you will bump into a complete stranger on the street because the other person is looking down at their frigging phone! All the time. Everybody! On the sidewalk, on the crosswalk, even in the middle of the street. Even drivers do it — several times I’ve seen someone parallel park their vehicle and stop before they’re properly parked to pull out their phone and look at it and text or talk to somebody while the line of cars and buses behind them wait for the guy to park! (And that’s another topic — cars are parked so close together here on the street that you can’t even get a motorcycle parked between them — no, wait! I think there’s room between those two, so I’ll just back my motorcycle in between so that there’s NO way anyone can get out without us moving 3 other cars! And parking like that means they spend at least 10 minutes cranking the wheel and going back and forth until they’ve wiggled their way into the parking spot.) Anyway, I digress. I’ve read that the market for paid iPhone apps has more or less passed, that there are now so many phone apps available that you can find a free one for almost everything. That’s too bad, because I think there’s a great opportunity for someone to make an app that would warn a walking texter when there’s an obstacle near them. Hey, they now advertise cars that can parallel park themselves (no, I don’t think that will ever work here in Paris!) and even my old van has a beeper when I back up and get too close to something. Why not an app that beeps when you are about to smash into someone or something? With all the concern about concussions in hockey and football today it’s only a matter of time before they make helmets mandatory for people walking on the street! When I get home I’m getting an iPhone. And a dog.

And what, gentle reader, do you suppose was on Sue’s ‘to-do’ list when she woke up this morning? Why, SHOPPING! With me! On our anniversary! I should have known.

For breakfast we had something a little different today: a baguette and two pastries from a DIFFERENT bakery — it’s Martes and that means our bakery is FERME. After breakfast we listened to music and read for the rest of the morning. We had our lunch at around 2 in the afternoon. We were just about to leave for our shopping adventure when Alex skyped to wish us a happy anniversary — two in the afternoon here is seven in the morning back home. After the call we headed out for today’s adventure.

We bought our second book of metro tickets and then took the metro from Saint-Georges to SÃ¨vres-Babylone, the station right next to the big Le Bon Marché shopping centre, a 20-minute ride. No surprise when we got there — window displays with fake baby deer jumping over colored balloons and very expensive jewelry, big perfume counters fumigating visitors the minute they enter the store, fancy escalators and ceilings and mannequins. Pretty sales ladies and boys all dressed in black. Hooey, we are in for a GOOD time!

The good news was that EVERYTHING WAS ON SALE! Attractive little red cards advertised 30% and 40% OFF on just about everything in the store. (I guess the government shut-down in the U.S. even creates hard times for the kind of shoppers that shop here!) The bad news was that even with those discounts the purse Sue asked a saleslady about was 1400 Euros! That’s two thousand bucks! So for the next hour or so we went around the store looking at price tags and shaking our heads. A ridiculous little men’s scarf was $400. A very ordinary grey sweatshirt with ‘MUSTARD’ stencilled on the front was 285 Euros. A good shopper like Sue usually has a bit of a weak spot for a big discount — but in this case the red tags only gave her a moment’s pause. And then we were outta there.

Our mission for the day had suffered a minor setback, but we would not be deterred. Let’s just go across the street and look at some purses there — it’ll just take a few minutes. I could see that it would be in everybody’s best interest if I moseyed on down the road a bit and found me an outdoor cafe. Which I did. And that’s where half an hour later Sue tracked me down for the credit card. 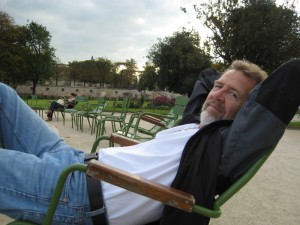 After Sue had shown me the great bargains she had found, we wandered back towards home. It was late afternoon. We ended up back at the Tuileries Garden near the Louvre museum. We sat down in the metal park chairs next to the big fountain and looked around at the beautiful flowers and the green grass and the incredible art and architecture all around us. Paris is really a magical city. We’ve had a marvellous time here so far. We sat there for a while and rested our weary feet. And then we walked home. 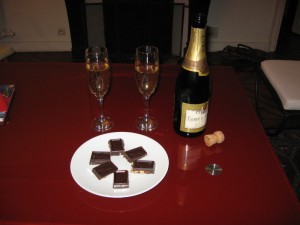 We stopped to pick up some champagne on our way home. When we got home we had a little happy hour with wine and cheese. Then at around 8:30 we headed back out for supper. Today, for our 36th anniversary, we decided that we would eat a NICE meal. So we went to the little French restaurant just around the corner from our place, “Les Affranchis”. (I just typed that into my handy-dandy translator and it says it means ‘Goodfellas’!) Well, compared to the last time we went to a ‘nice’ restaurant, this was fantastic! We ordered foie gras for a starter and Sue had veal liver for her main course and I had cod in a cream sauce. Excellent. Looked great, tasted even better. A delicious French coffee after dinner. Then home to watch the second episode of Downton Abbey. We’ve got champagne and chocolate for a night snack. I’ll let you know how the evening turns out — tomorrow.