We woke up at around 7. It was cool and misty outside, but it was going to be another warm sunny day ahead. Sue thought we should head into the communal kitchen before everyone else woke up, but that didn’t happen. So after a shower down we went to inspect the zoo that was breakfast — 3 waffle irons with hungry athletes blocking everyone else from getting near the slop-pail of pancake mix, a couple of big toasters surrounded by young girls in oversize t-shirts and pajama pants, the big tub of muesli already three-quarters empty, one young employee doing her best to mix up more powdered milk but barely able to keep up with demand, instant coffee and tea to mix with the hot water boiler mounted on the wall, and nary a place to sit — all the picnic tables and ratty old couches already occupied. Sue made us each a slice of toast with marmalade and we went outside and joined to older german guys on the porch of the building next door. They were devouring their plate of toast, and after they’d eaten that they took out the other half a loaf of sliced bread they’d pilfered from the kitchen and began making sandwiches for themselves for ‘on the road’. Maybe they are cycling — I did see a couple of bicycles with big packs behind our room where the tents were set up.

I filled up with gas before leaving town. Our little Toyota still had about a quarter tank left, but gas stations are few and far between here on the west coast, and I’d rather be safe than stranded. Gas is a little more expensive here than up north — $73 for 3/4 tank! $2.23/litre. But it was worth it. We had a GREAT ride down to Queenstown today. 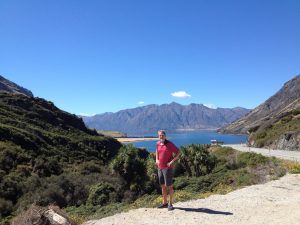 The drive down to Queenstown was stunning. 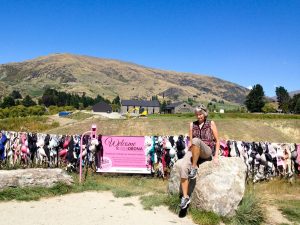 We just HAD to stop to check out this interesting fence on the road into Queenstown.

Nope. Nothing in Sue’s size here. 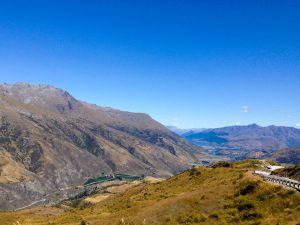 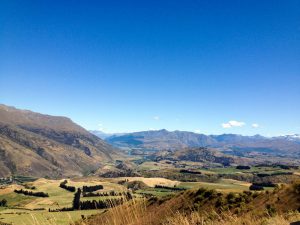 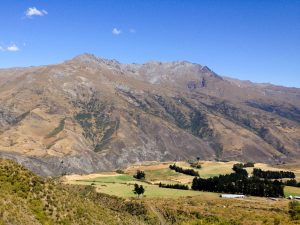 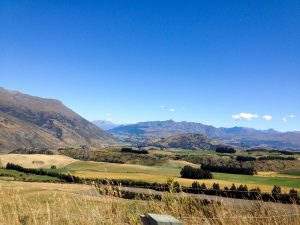 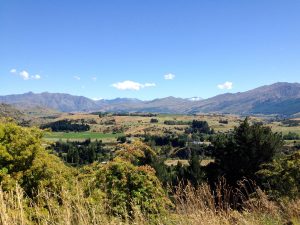 We started the day in the mountains — and half an hour after Franz Josef we drove through the Fox Glacier village. Then we began the switchbacks down the mountains. We stopped for lunch at a large roadside cafe in Makarora. And then the highlight of the day, the drive first up and then down alongside Lake Hawea, through Albert Town and then Arrow Junction, and finally to our AirBnB in Shotover, just outside of Queenstown. The 340km drive took us four-and-a-half hours, not counting the stops. A lot of winding roads!

We checked in at our B&B. Sarah, our host, was just finishing up with some gardening. The home is in a brand new development. Sarah and her husband Morgan have a 6-month-old baby girl and a big dog. We checked into our room and then sat outside at the patio table and had a cool libation. Morgan came home from work. The whole household is going out tonight, leaving at 5pm, and possibly not returning until tomorrow morning.

Sue and I decided to take a drive into town. We parked our car and took a walk around. Wow! What a great town! Sue remembered Queenstown as one of her least favourite New Zealand towns when she visited here some 30 or so years ago. Not so today! The small town (about the same population as Steinbach) cradles crystal clear Lake Wakatipu. There are lots of restaurants, bars, and shops all around the waterfront. And the beautiful large Queenstown Gardens on one end of the bay. 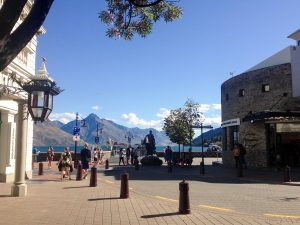 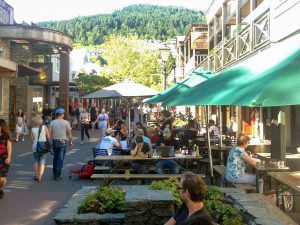 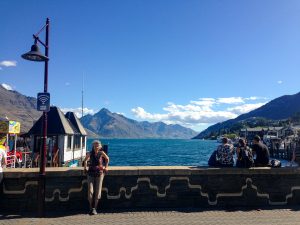 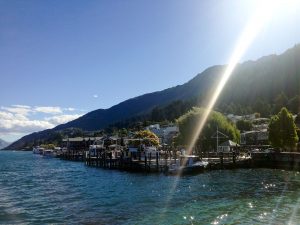 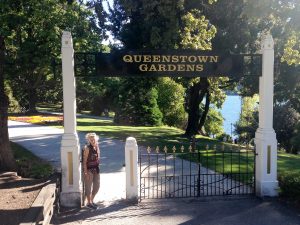 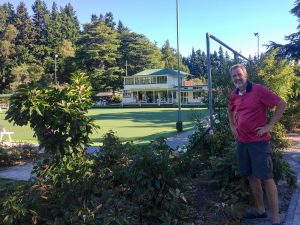 The Lawn Bowls Club in the Queenstown Gardens. 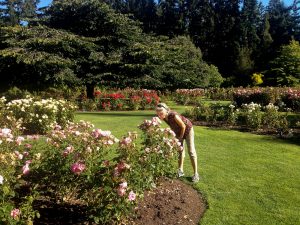 The Rose Garden in the Queenstown Gardens. 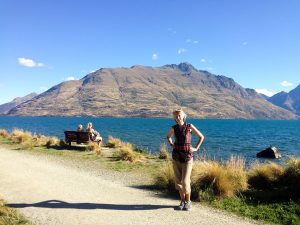 At around 7pm we were getting hungry. But instead of taking advantage of all the great restaurants and live music and great looking people that were all around us in downtown Queenstown — well hey, it’s Friday night, and that means it’s Pizza Night.

We stopped by a pizza joint and ordered take away. We drove back to our B&B and were a bit surprised to learn that our hosts had decided to take their dog with them for the night. Whew! Good for us. We plopped ourselves down in front of the TV and watched nothing good while eating our pizza. We opened up all the doors so the evening breeze could flow through the house and cool it down a bit.

By ten o’clock we were ready for bed. We’ve got an easy day planned for tomorrow — a 4-hour bus ride to Milford Sound, a 2-hour boat ride, and then a return bus trip. We’ll be gone from 9 to 9. And it’s supposed to rain in Milford Sound! When I mentioned that to our host Morgan he said, “Good. At least you’ll have less sand flies!” Sounds like Manitoba!