We woke up at 7. Actually, I woke up at 7 — Sue said she didn’t sleep last night! Good thing she doesn’t have to drive today. We’re taking the bus for a 4.5 hour bus ride out to Milford Sound and after a 1.5 hour ride on a boat, we’re coming back home on that same bus. That’s a lot of sitting on the bus, but at least it’s not as stressful as helping Rudy drive the car.

Our hosts didn’t come home until after we’d left this morning. Breakfast was toast and fruit and coffee. We were at the bus station about 5kms from here by 8:50, and the ‘Jucy’ bus was there to pick us up just before 9. We were lucky to be the last pickup of the morning — some of the passengers had already been sitting on the bus for nearly an hour. In fact, the bus was full and it looked for a minute like Sue and I wouldn’t be sitting together — but the driver ordered a single guy to move next to a single girl and that opened up 2 prime seats in the second row for us.

The driver didn’t stop his (monotone) running commentary in a very thick Kiwi accent until about and hour and a half into the trip. Finally he put on some ’70s music instead. The weather was cloudy and we had a few drizzly and even rainy spells on our drive to Milford Sound. Milford Sound is a fairly deep fiord on the south west coast of New Zealand. From Queenstown it is only about 70km by air but about 300km by bus. And it is a winding, but very scenic drive. We made numerous stops enroute for short walks and to take photos. We stopped the the town of Te Anau for lunch. It was almost 3pm when we got to Milford Sound and boarded our boat. Sue and I bought our tickets online and had opted for the ‘included pita lunch’ option. Oops — that was a mistake. We could buy them on the boat for the same price and after we shared one pita wrap we were stuffed and had to pack the second one into our bag to take home with us. 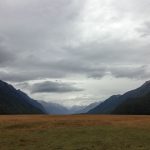 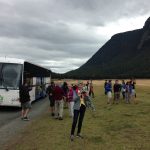 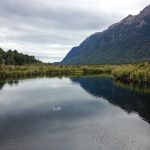 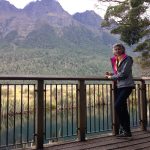 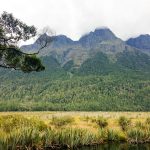 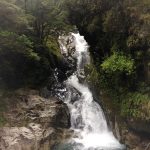 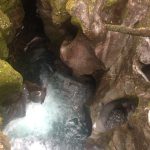 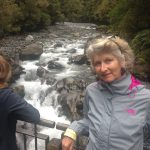 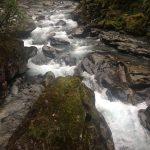 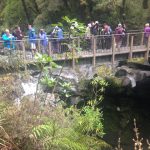 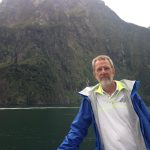 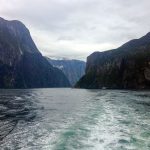 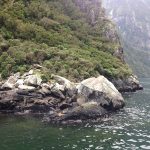 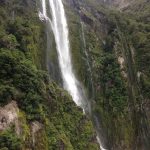 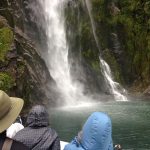 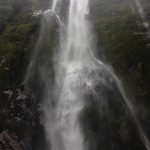 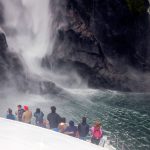 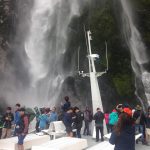 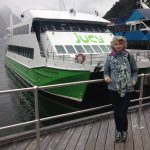 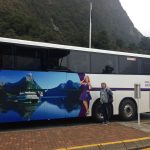 The boat cruise was better than we’d expected. The forecast had called for an 80% chance of rain, but the clouds actually lifted as we cruised the 15km trip from the dock out to the Tasman Sea that separates New Zealand from Australia. We saw quite a few very tall waterfalls, and even stuck the nose of the boat into one so that the young people who were standing on the bow could get soaked.

Next to us on the bus sat an older couple from Great Britain. We had a nice time chatting with them on the trip there and back. They travelled a lot, and said that for the last dozen years or so they spent more time in their home in Florida each year than they did in the U.K.

It was 9pm when the bus dropped us off where we’d parked our car on the road beside a bus shelter. We drove back to our AirBnB. The hosts were snuggled up on the couch in the living room, watching some crappy reality show on TV. Their big dog welcomed me home by sniffing my crotch and licking my hands and putting his big face right into mine as I sat down on the couch. Yeah, I know — I’m supposed to be really ga-ga about how great our hosts’ dog is, and gush about how cute he is, and play with him, and love him to pieces — but somehow that just seems wrong. I’m paying THEM to be nice and friendly to ME, not the other way around.

Sue zapped our leftover pita in the microwave and we shared it over a glass of wine. We sat on the couch for a few minutes and showed some interest in the crappy TV show and then excused ourselves and went to bed. We’d had a great day today, but we’ll be quite okay leaving here tomorrow shortly after ‘breakfast’ and heading across the island to the east coast for a couple of nights in ‘our own’ apartment in Christchurch.