We woke up, showered, had breakfast, and left our AirBnb in Queenstown shortly after nine. It was a warm but cloudy day, but the weather forecast for Christchurch was sunny. Google Maps said we were in for almost six hours of driving today.

After about two and a half hours were were between Twizel and Tekapo, driving along the shore of Lake Pukaki. The Lake was a bright blue-green. And across the lake, in the distance, standing tall alongside other snow-covered mountains, we could see Mt Cook (3,724 metres), the highest mountain in New Zealand. I think we were lucky to see it — not long after these photos were taken the clouds shrouded the mountain from our view. 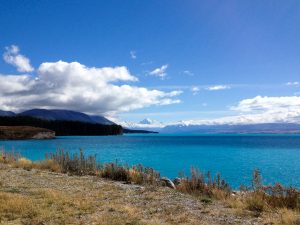 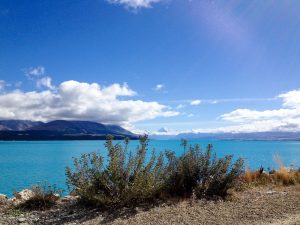 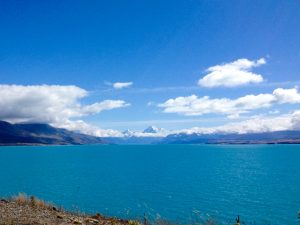 The drive took us across the South Island of New Zealand. The last 150 of our 500km drive was along the #1 highway near the east coast. Here the landscape was comparatively flat, not unlike the prairies at home. Sure, there were still lots of fields of sheep, but we also saw herds of cattle and big fields of wheat and other agricultural crops. And while most of the day had seen only light traffic, the road up to Christchurch felt a bit like the ride from Falcon Lake to Winnipeg on a summer Sunday afternoon, when everyone is heading home after the weekend at the lake. And that forecast for sun? It rained for the last hour of our drive.

At around 3pm we pulled into Christchurch. We were about a mile from our destination when we spotted a ‘Countdown’ grocery store. We pulled in and picked up stuff for breakfast and lunch fixings. Then we found our next B&B, this one a furnished studio apartment where we’ll plant ourselves for the next two nights.

We moved in and checked things out. Very good. Then we sat down and had a late lunch — leftover pizza and sushi. It was still raining and a bit cool, but our apartment had air conditioning and a heater and soon it was very comfortable in there. I hooked up my AppleTV to the big TV on the wall and Sue and I watched another movie from our Oscar list, “Loving” (Best Actress). We still had one more ‘big’ movie to see, “Fences”, so we ended our evening by watching that (Best Picture, Actor, Supporting Actress, Screenplay). That more-or-less catches us up for the Academy Awards, which take place tomorrow afternoon (which is Sunday night at home). I don’t think we’ll get to watch the Oscars — at least not on our TV here. But we’ll do our own voting here, and see how we make out tomorrow.