Woke up around 6am. Showered and put on my long pants and socks and shoes. Packed my shorts and sandals away. It’s supposed to be a lot nicer in Steinbach than it has been for the past month, but I’m afraid I won’t be wearing sandals for a while yet. We picked up a coffee at the Starbucks in the big grocery store next to our motel and then hit the road. Dave took the first turn at the wheel. He suggested that we stop for ‘brunch’ sometime later in the morning and that’s what we did. As we drove through Trinidad, Colorado we passed a lovely cafe. We parked the van and had a very nice wrap that doubled as breakfast and lunch for us. Dave worked on his New York Times Sunday crossword and finished it on the road a while later while I drove a stretch.

We drove north, heading for North Platte, Nebraska. It was a 2-lane road most of the way. Not too many trucks. Thousands of big windmills. Increasing amounts of snow in the ‘ditches’ and white salt residue on the highway. We stopped for gas (the gauge showed we had about 35kms worth of fuel left) and ice cream in Limon, Colorado. Dave drove from there to North Platte. We pulled into North Platte at around 6:00pm local time (we lost another hour due to the timezone today). Dave parked on a Starbucks parking lot and logged onto the wifi there. He booked a Motel 6 room for us and we drove across the road to check in.

The motel was newly renovated but wifi was an extra charge. Nope, not me – charging for wifi seems petty and I will take a moral stand against it and do without tonight. We called the front desk and got info about a local movie theatre and list of shows and show times. The theatre was more or less across the street from our motel – so we walked there. ‘A Quiet Place’ was getting great reviews. We sat through ads for the first 15 minutes and previews for another 15 after that. Then the movie. It was over at 9:30. We walked out into a dark empty parking lot. It was cold outside! 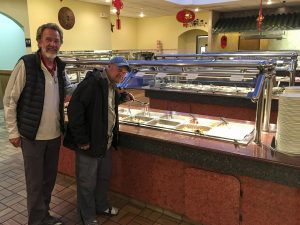 We hurried across a few streets to a Chinese restaurant that featured an all-you-can-eat buffet. Just in time! They were closing at 10:00 and quite a few of the food trays were already empty. But we managed to fill up our plates a couple of times and called it supper. After our meal we logged on to the restaurant’s wi-fi and deleted all our new spam. I sent Alex a text that we might well be home late tomorrow night so she would know to turn on the water and heat in my house. Got an immediate reply: all done. My kids are marvellous!