Alex and I cycled down to Bashas’ and picked up pastries for breakfast.

After breakfast Max and Alex went upstairs for a few minutes — and when they came down they had a gift bag for Opa. New golfing shorts! Just what I wanted!

Max and I went for another bike ride — he’d getting more confident every day. Things are a bit more undulating here than they are in Steinbach, and it takes a bit of practice to pedal HARD up an incline, and to use the brakes to slow down on a downhill. But Max is doing great.

When we got back Alex took Max to the pool. Max just LOVES the pool. And the hot temperatures we’ve had here this week suit that just fine.

Back from the pool, Tim and Alex made sandwiches and we had lunch. Tim was feeling “about 90%” after his miserable day yesterday. It was all systems go for our 2 o’clock tee time at Dinosaur Mountain.

I checked with the desk at the course to see if it would be okay for Alex and Max to ‘ride’ the course, just for the view. It was supposed to be an extra $25 per person, but I think the guy gave us a pass.

The Dinosaur Golf Course is a tough course. It’s also a spectacular course. Almost every hole presents a dramatic view. The ‘humps’ of Dinosaur Mountain and the valley below. Manicured fairways and undulating greens protected by deep bunkers. The greens are lightning fast. After Tim and I both hit reasonably good (safe!) drives on hole number one, Tim proceeded to roll his putts back and forth across the crowned green. We would be golfing today for the ‘experience’ and the view rather than for a great or even not-so-great score. 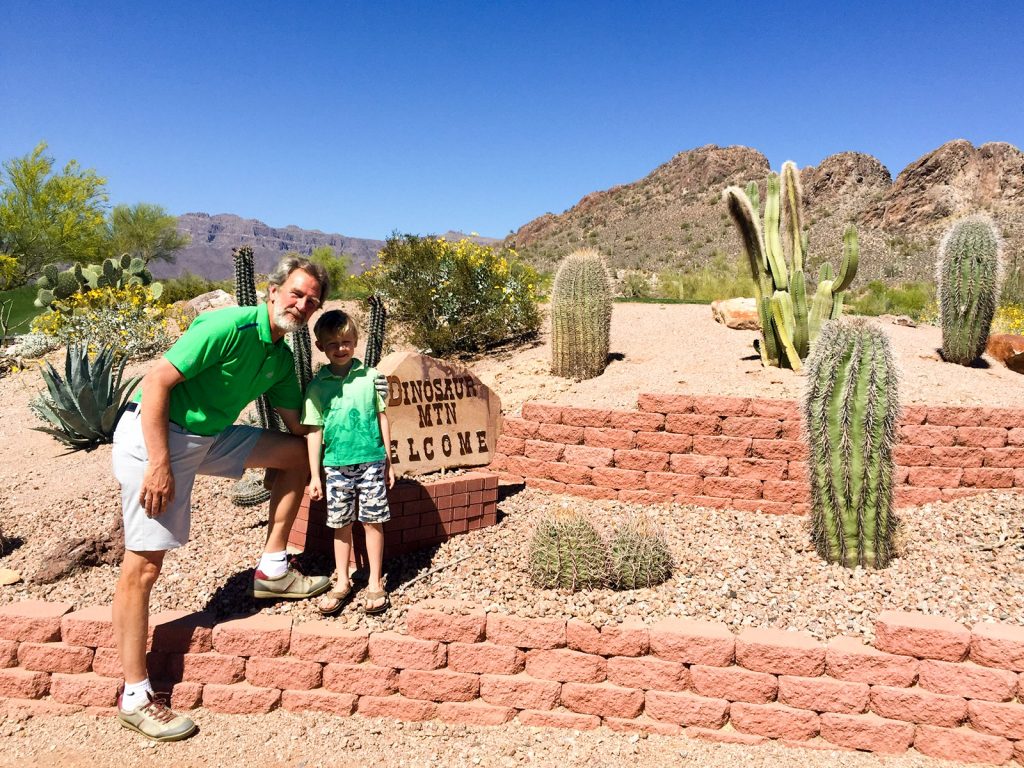 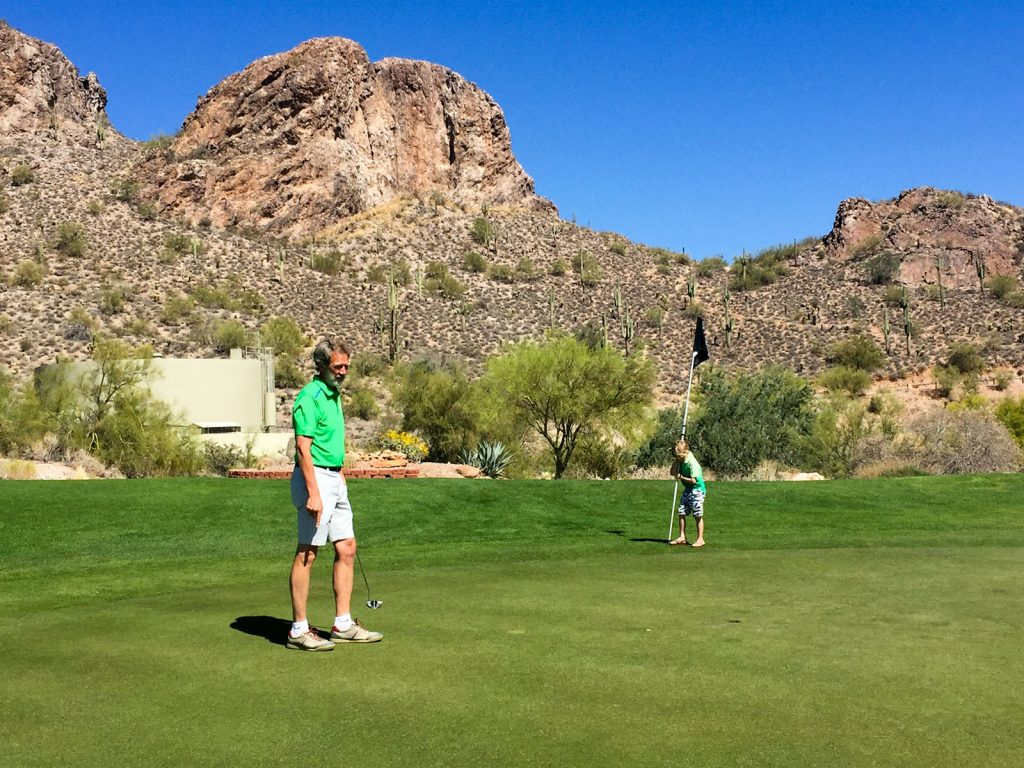 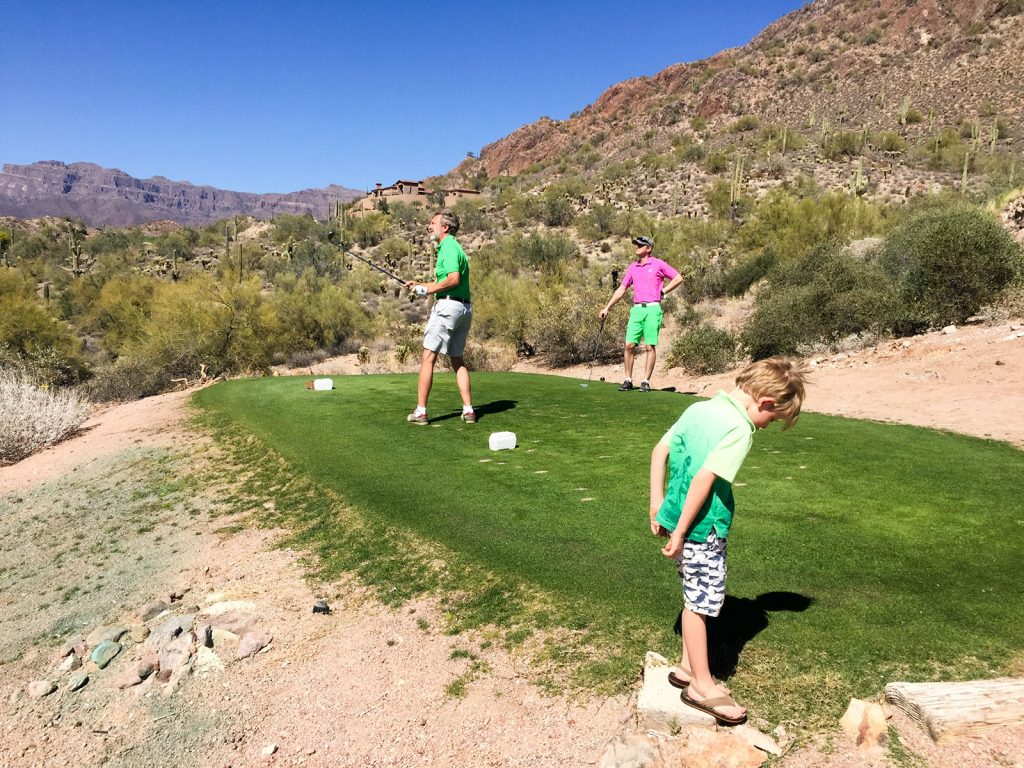 Max is unconcerned about getting the ball on the green on the Par 3 second hole. 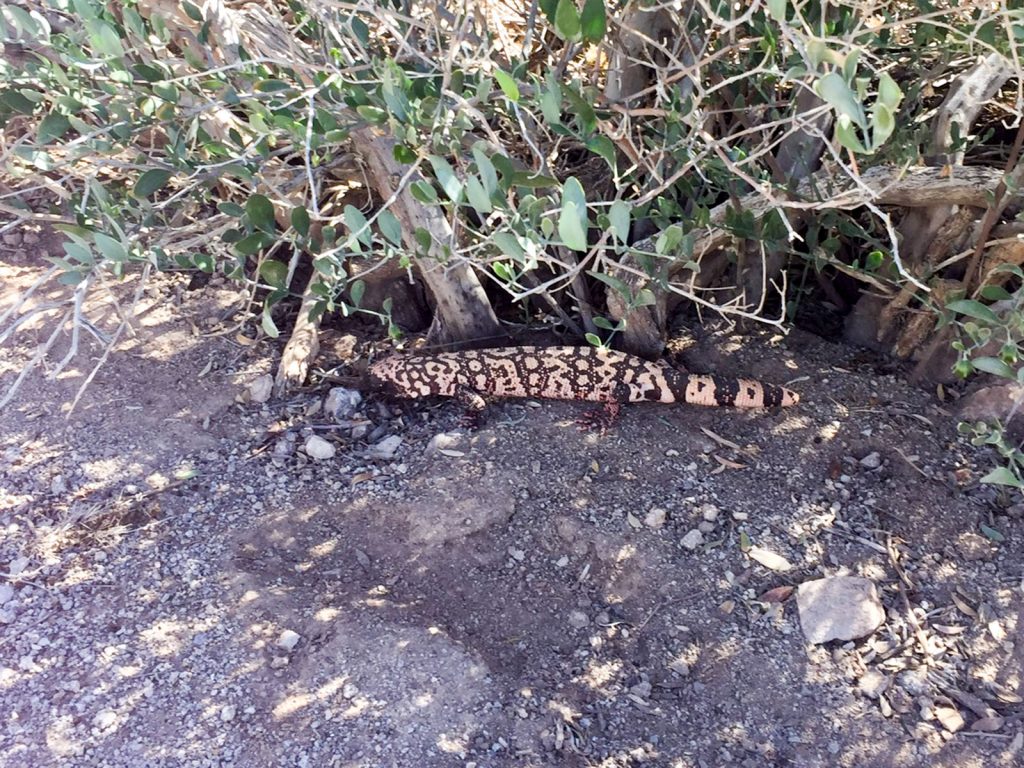 This big fat lizard was about 2 feet long! 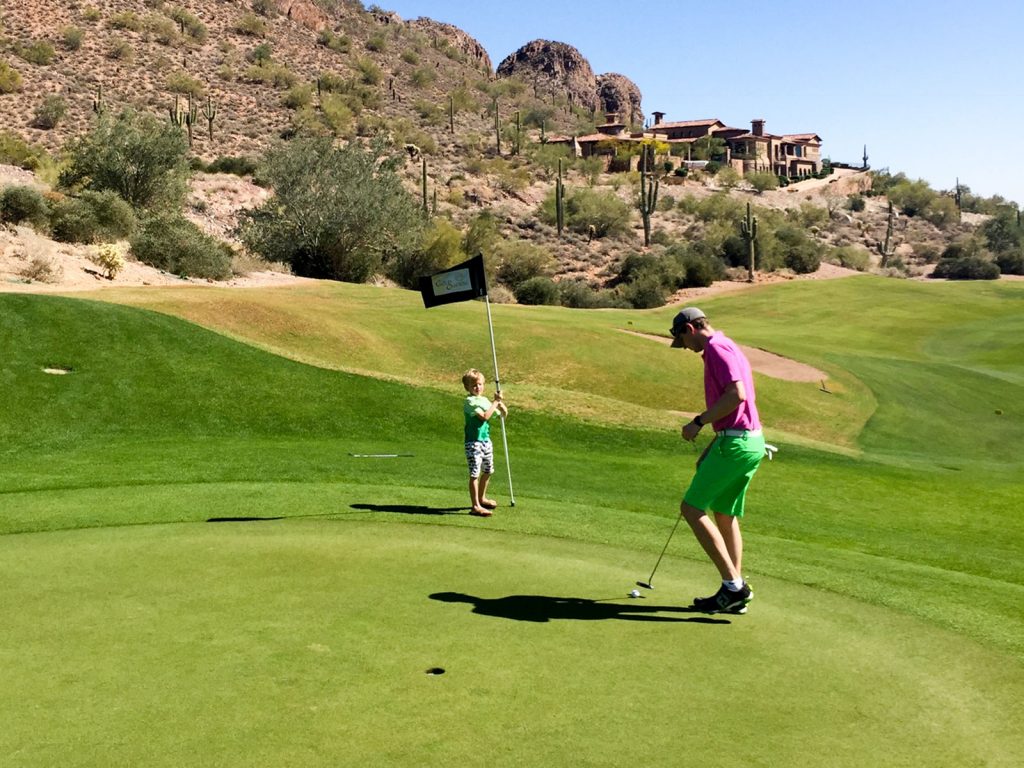 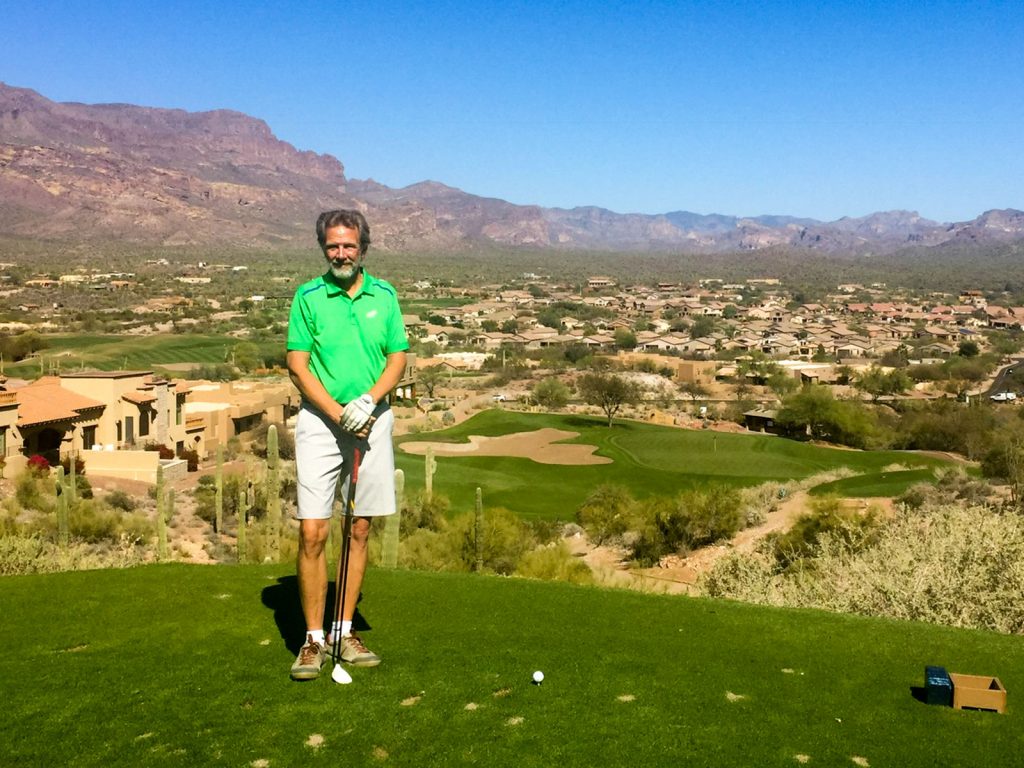 Looking happy BEFORE teeing off on the par 3 fifth. 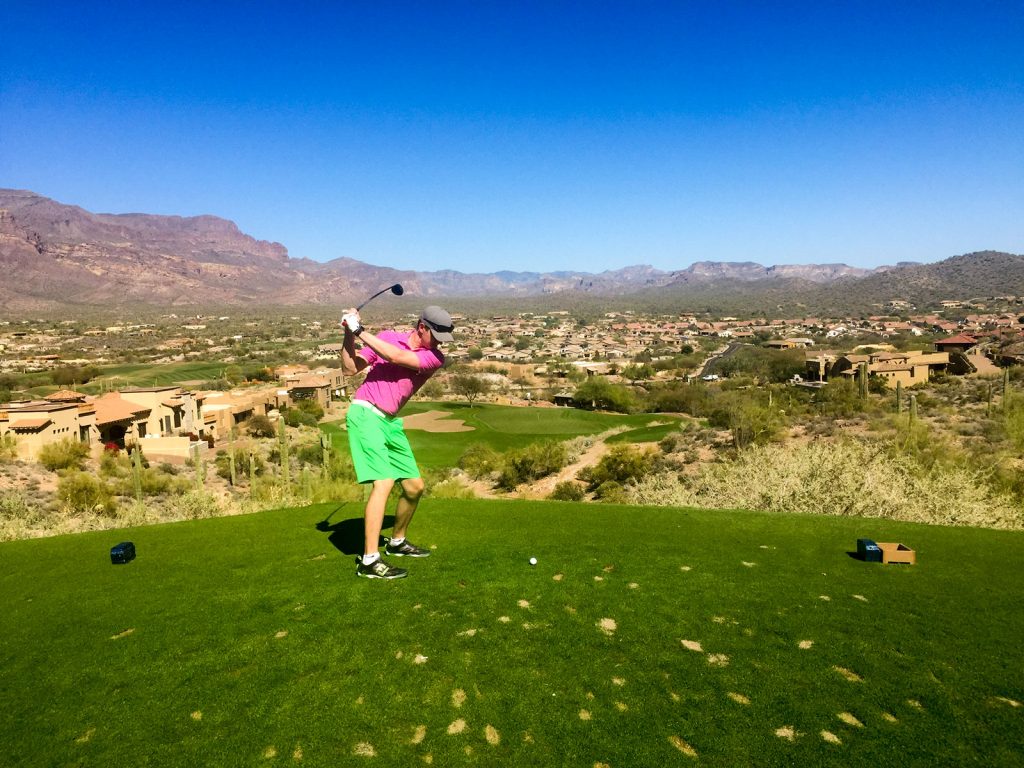 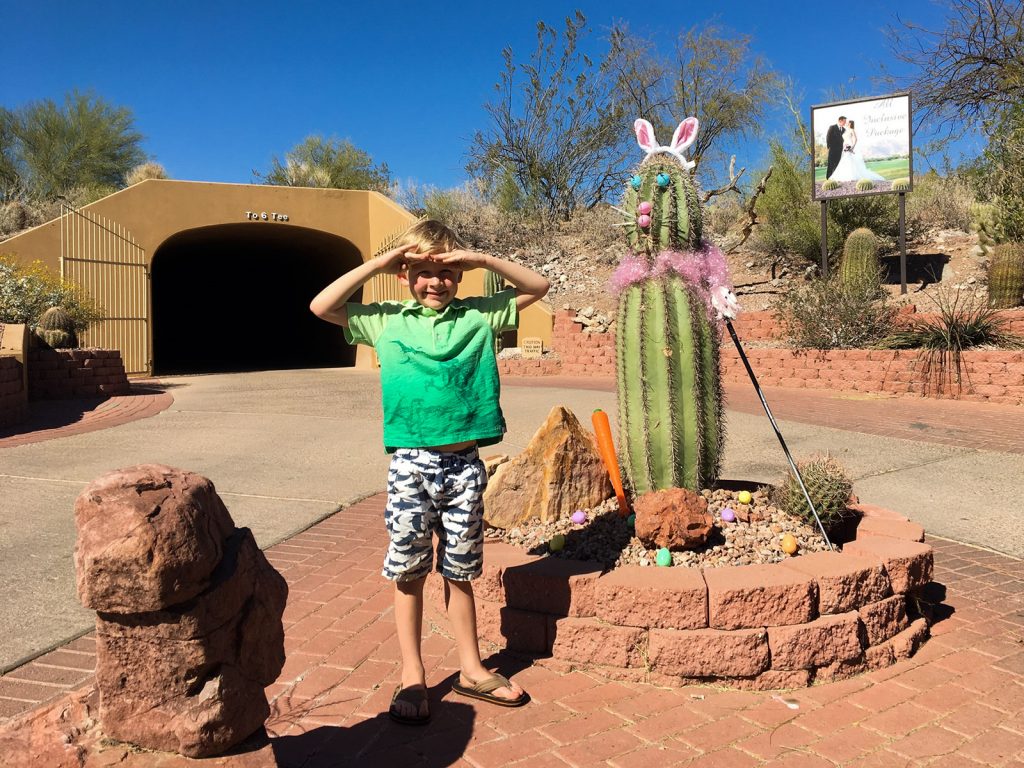 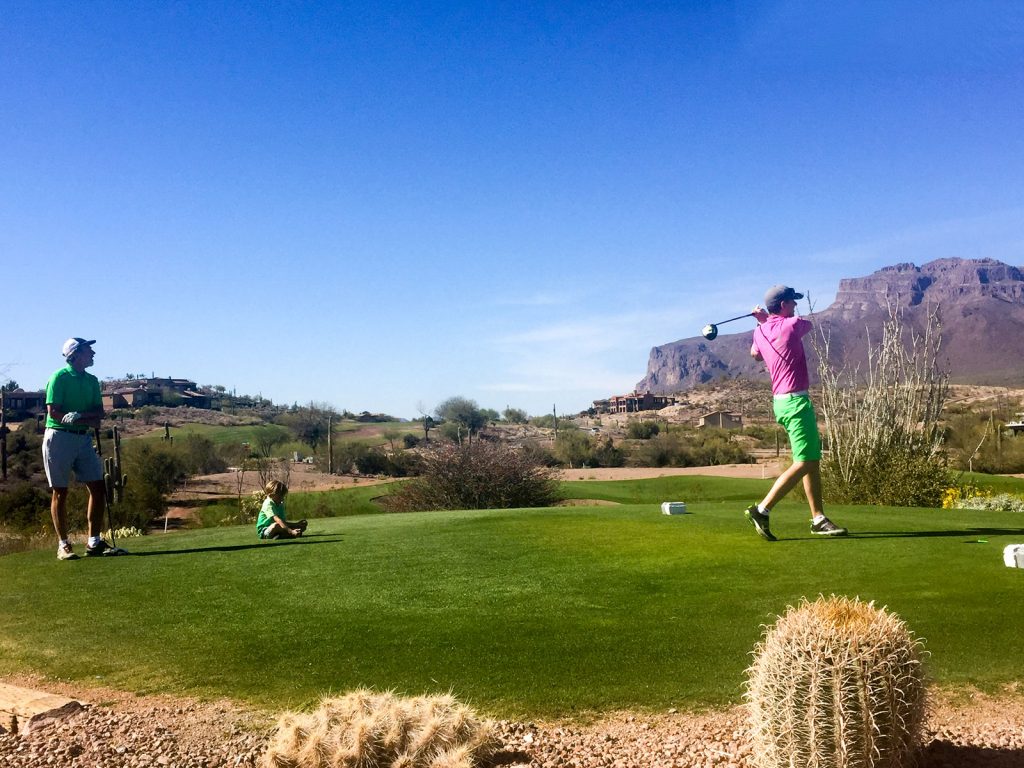 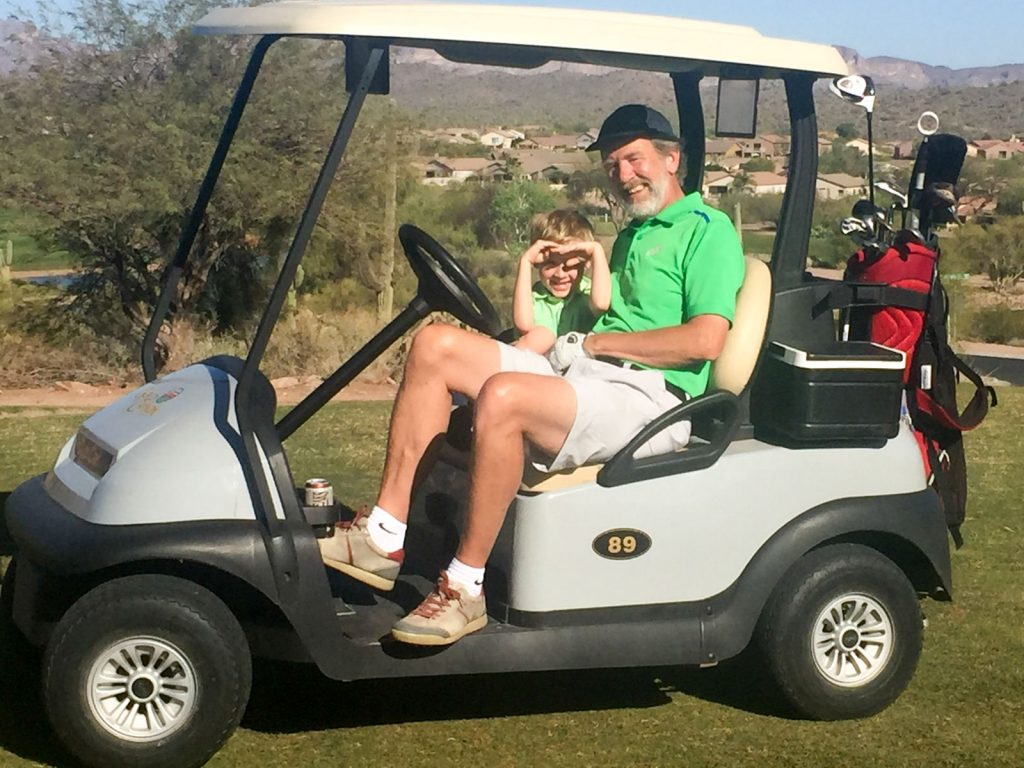 Golfer and caddy rode together. 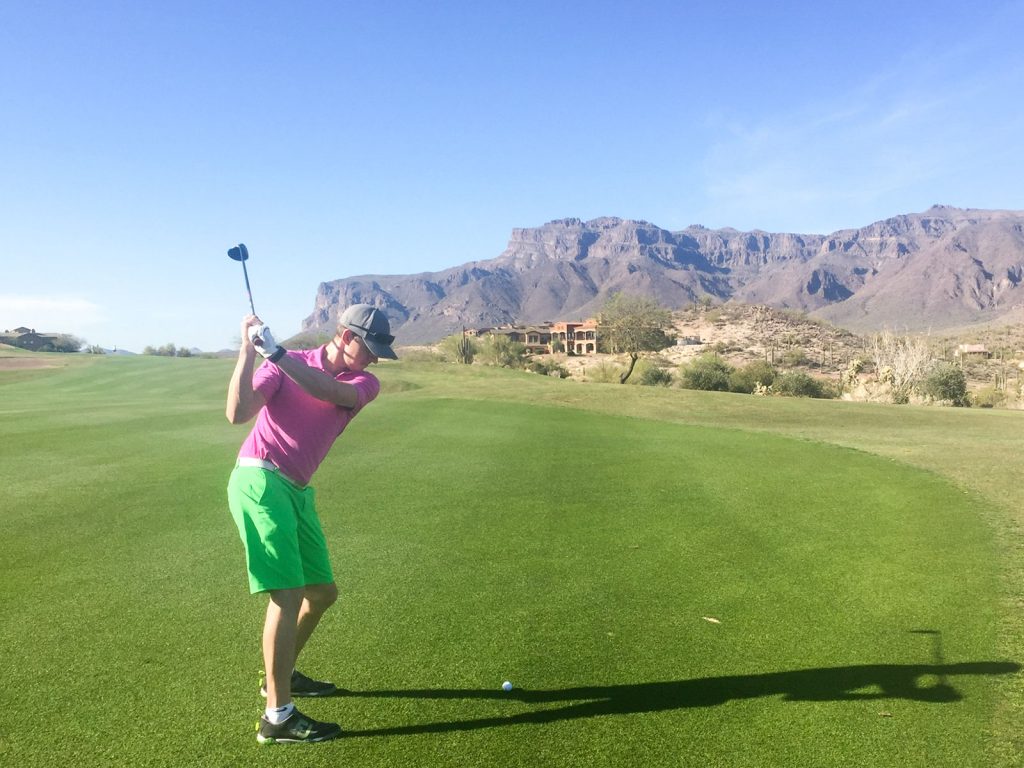 Tim about to blast one all the way up Superstition Mountain. 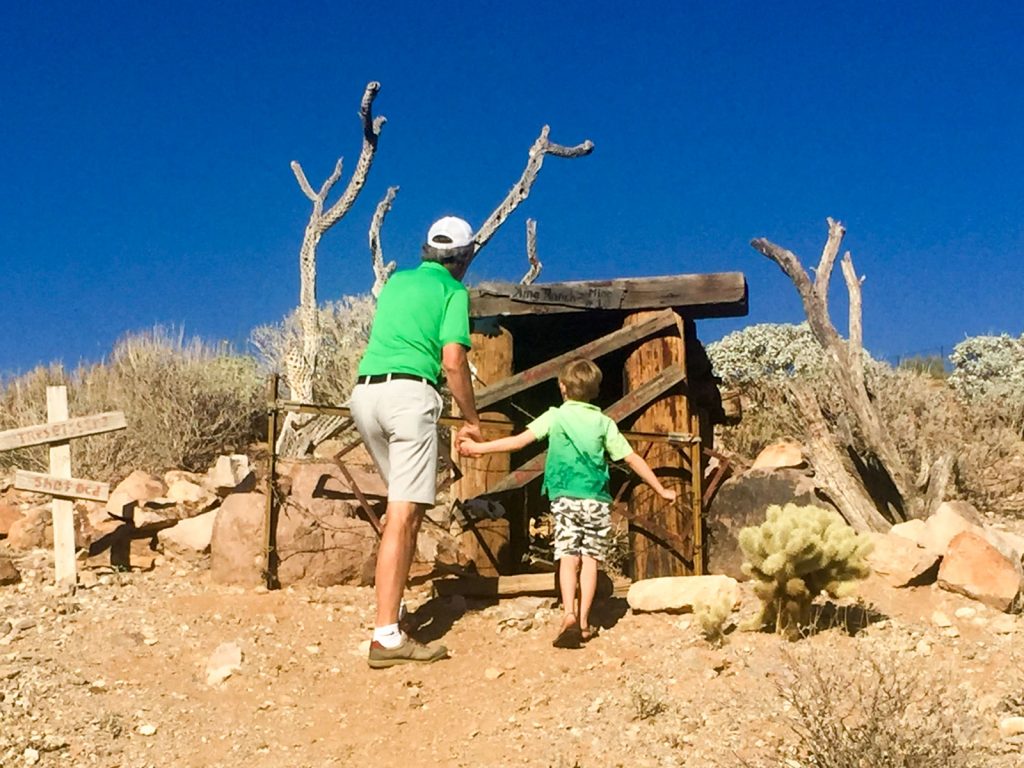 Max was captivated by this ‘abandoned gold mine’. 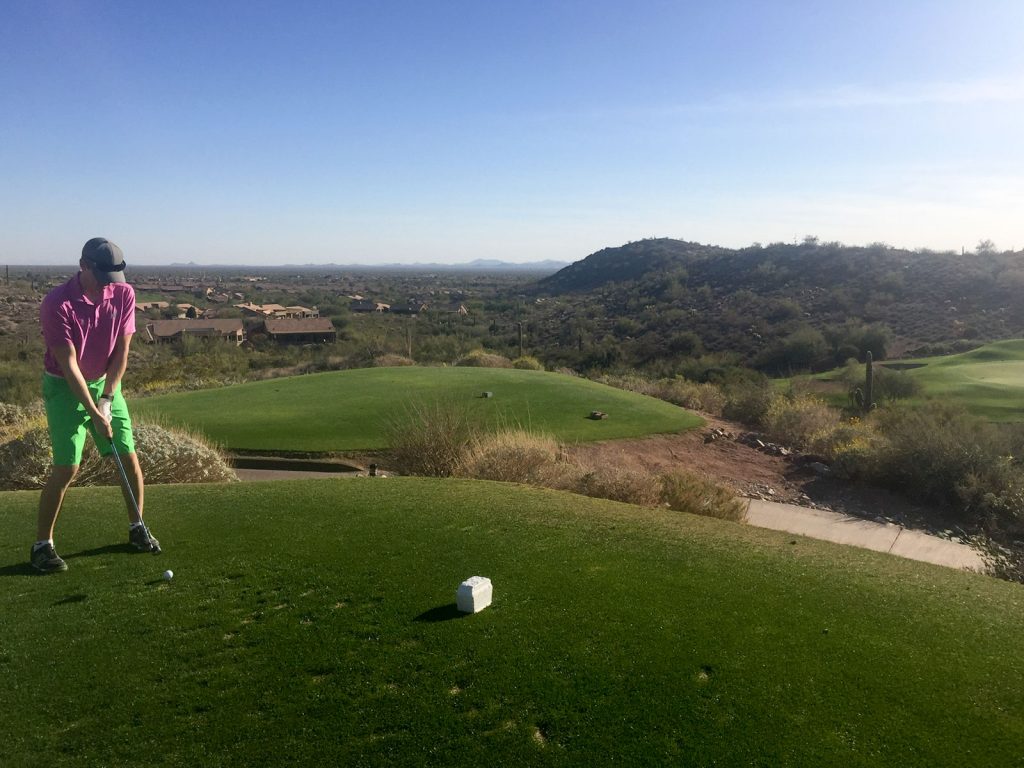 Tim tees off high above the 14th green. 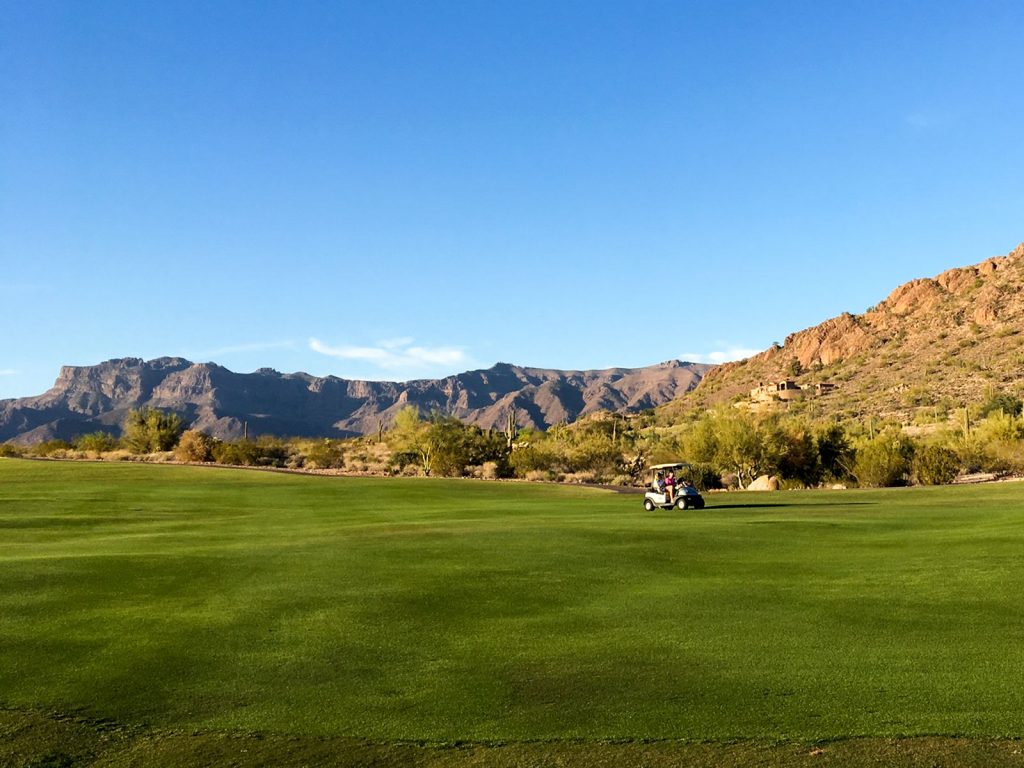 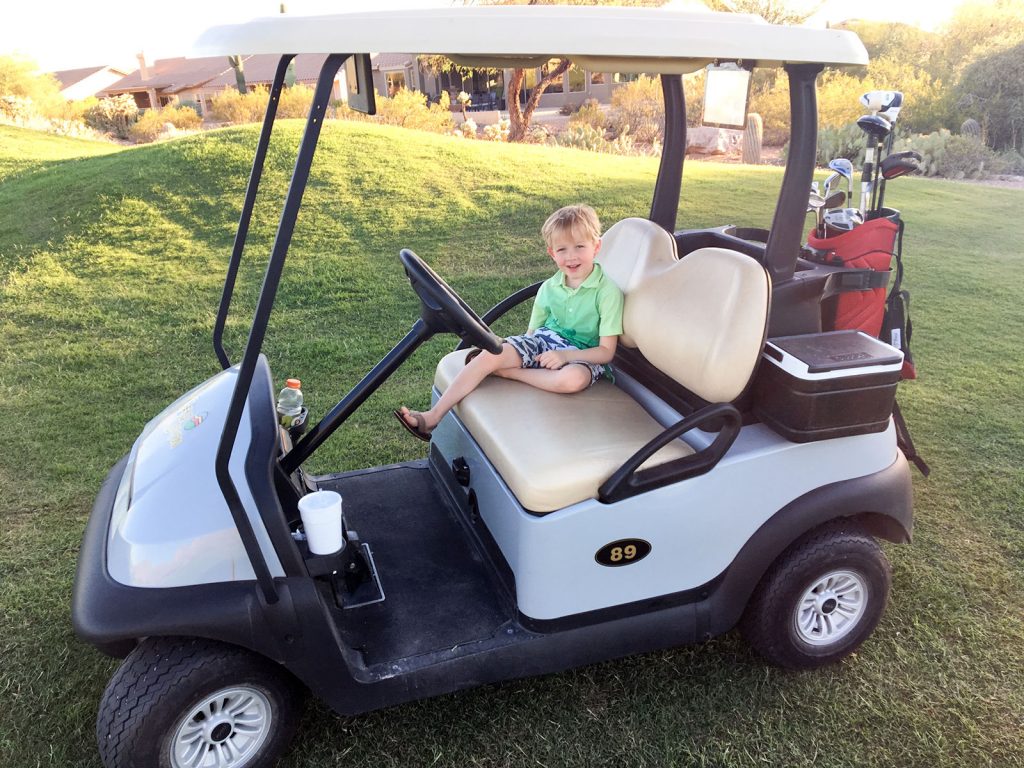 Ever-cheerful, Max was a great ‘golf-buddy’ for ‘Opa’.

Tim seemed to be feeling quite a bit better than he was yesterday. But as the game went on his symptoms returned. He skipped a few holes on the back nine. We had planned to go out for supper after the game but when we finished the 18th he asked if I could take him home. So we went home. Alex and I were discussing supper options when Tim came back down the stairs and asked about the Urgent Care clinic hours. It was around 6:30 and the clinic was open till 7. Tim had been ‘googling’ his symptoms and it seemed to indicate appendicitis. We all piled back into the van and drove to the Urgent Care clinic down the road.

The doctor who looked at Tim suggested we head straight over to the Emergency entrance at the nearest hospital in Apache Junction. If this really was appendicitis (and he believed that’s what it was)  golfing or doing other strenuous activity could end up aggravating the situation and possibly triggering serious issues for Tim. So we immediately took him to the emergency entrance at the hospital in Apache Junction.

I left Alex and Tim there while Max and I went looking for supper. We ended up at a Burger King a few miles from the hospital. We ordered and ate our supper and took a burger and drink back to the hospital for Alex. Tim was waiting for a CT scan.

After waiting for some time, I took Alex and Max back to the house. It was bedtime for Max — the heat of the day had taken its toll on all of us. Alex thought she would go back to the hospital to stay with Tim through his surgery. She had already checked out flight options for later next week; the doctor had told Tim he would not be able to fly for a couple of days after the operation.

We were barely back at the house when Tim sent a text: he’d been given the ‘all clear’; come pick him up. The diagnosis revealed that it was NOT appendicitis. Although the symptoms were identical to appendicitis (the doctor was so confident in his initial diagnosis they had Tim change into a hospital gown and all prepped for surgery), the CT scan showed no problems with internal organs. Tim had a virus (mesenteric lymphadenitis) whose symptoms were exactly the same as appendicitis but which could be relieved with rest, fluids, and a pain medication like Aleve. I had just made a couple of gin and tonics for Alex and me. I put my drink in the fridge and drove back to the hospital (15 minutes each way) to pick up Tim. He already felt a whole lot better — in part due to the pain medication he’d received, but almost more significantly, because he now had a diagnosis, a name for what was bothering him, and a plan for what to do about it. Relief.

Back home we sat down and took a deep breath. After the hub-bub of the last 3 hours, it was good to sit down and relax. All-in-all it had been a very good day. A very good BIRTHDAY! And really, we had done nearly ALL the things that were on our list for the day, other than missing our evening dinner at the golf course restaurant. Alex said that Burger King burger had never tasted better! Tim was visibly relieved. After a bit of decompression we headed off to bed — a good night’s rest would prepare us for tomorrow, the last day of March, the last day of this family holiday in Gold Canyon.