B+E this morning. No, not another break and enter at the 7Eleven in Steinbach — bacon and eggs in Green Point. It’s Saturday!

After lunch we went for a walk — I wanted to see how preparations were progressing on our road for the big parade tonight. They’d already blocked off our corner at noon and were setting up barricades and bleachers beside the route. The parade will start at the Buitengracht corner and end at our corner on York Road. We stopped at a bakery along the way to check out options for tomorrow — we’re invited to Marina’s for lunch and will bring dessert. We’d invited both Paddy and Marina to come watch the parade from our balcony but by early afternoon both had replied that they would not be able to make it. We saw a few floats parked on the side roads with people busily fixing and painting and getting things ready. There is excitement on the street.

From the starting point we headed to the Southern Sun Waterfront Hotel, which used to be the Holiday Inn and was where we stayed for a month back in 2002. I wanted to walk our ‘old’ route from the hotel to down to the V&A. Fourteen years ago that route took us through a bit of an “iffy” section and we seldom walked there in the evening. Today it is all cleaned up, nice sidewalks and good lighting and lots of tourists and visitors out on the street. We walked past the marina and the Cape Grace Hotel, two of the landmarks we remembered from all those years ago. 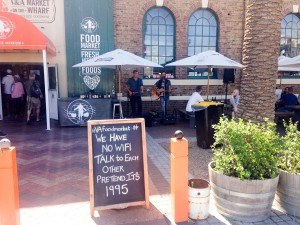 Folk singers at an outdoor cafe 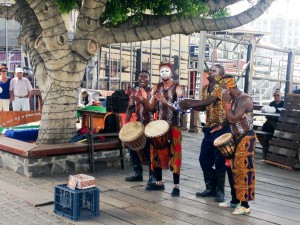 Traditional African drummers on the Waterfront

The Waterfront was as busy as ever. Saturday. Lots of people sitting in the outer cafes, entertainers spread throughout the area, children playing in the play areas, shops busy. We wandered around for a bit, stopped to get more cash from the ATM, bought some new shoes for me, and then headed back home. As we were walking the air suddenly got a lot cooler, and the sky turned misty and foggy — we were walking through some low clouds. We thought for sure we are going to get rained on, but that didn’t happen. That’s how the weather can be here between the ocean and Table Mountain — sudden changes like this, when the ‘table cloth’ cloud that we often see on top of the mountain comes swooping down to the sea. I wondered how wind and rain might spoil the parade tonight, but needn’t have worried.

By 7 o’clock the streets below us were packed. Thousands of spectators were out to watch the parade of costumed performers, musicians, and floats. Loud thumping dance music was all around us. I stood out on the balcony, barbecuing our ‘boer wurst’ and watching the goings on. Since so many streets had already been blocked off, one of the few roads INTO the area was the one-way coming down past our place. There was a zoo of parked cars, all along both sides of our street, blocking garage entrances and plugging up the sidewalks. And the self-proclaimed ‘parking attendants’ were having a great evening, gesturing and conducting and yelling as the cars just kept coming into the area.

The parade route was jammed with onlookers on either side, so all I could really see from our first-floor balcony was the big lit-up floats. But they were only coming by every 5 or 10 minutes — while I still heard cheering and saw cameras flashing in between floats. So I had to go down to the street and see what was happening. And what a party it was! All the restaurants and bars on our street were PACKED! People were hanging off balconies above in the hotels and apartments on Main Road. Families sat in lawn chairs right on the street. The crowd along the actual parade route was at least 10 people deep here, and probably even more dense further up the street. Lots of onlookers had come prepared, dressed in exotic costumes and ready to party. As I pushed my way closer to the parade route I could see that the spaces in between floats had plenty of entertainment — marching bands, street dancers, large groups of school children all in costume, clapping, chanting, singing, dancing. REALLY dancing, like you see in the old Michael Jackson videos, where large ensembles dance in practiced and choreographed moves. They were good! No wonder I had heard so much cheering and clapping. 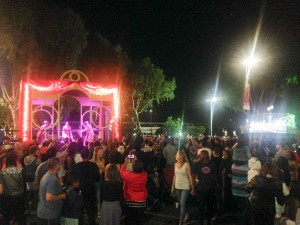 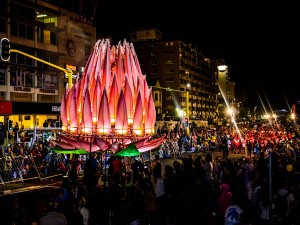 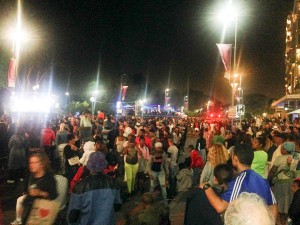 I returned to the apartment where Sue was still sitting quietly, playing Scrabble on her iPad and complaining about the loud throbbing bass coming from the floats. We had a little dish of yogurt for night snack and turned on the TV. The last thing I remember is Sue laughing at me as I desperately tried to keep my eyes open and my head upright, watching some highlights from the late-night talk shows. She hauled me off to bed while that party on the street was still going strong, the pounding was as loud as ever. But it all ended when our heads hit the pillow.