We got up at 7 and started watching ‘Sunday Morning’ on CBS. We switched over to Fareed on CNN at 8 o’clock. The sun was shining — we’d not seen that for a few days. After breakfast I cycled across the road and hit a few balls on the driving range. I went back home for lunch. Susan, the homeowner, stopped by to drop off a suitcase of her clothes — she’s heading home tonight because of a sick grandmother.

Shortly after 12 we drove across the street to Gold Canyon Golf Course. We registered and then went to the driving range for a bit. Dave was there early too. We asked and were permitted to head to the tee blocks about 15 minutes early. The group ahead really never kept us waiting and we felt that we were making great time. We would probably have preferred to make great shots, but you can’t have everything. 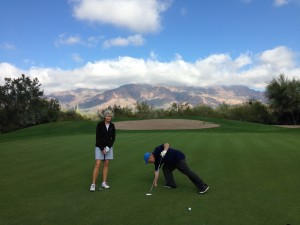 Dave was hitting the ball really well. And even though I was not golfing as well as I’d hoped, we had a very good time. The sunshine, the temperature, the pace. By 4 o’clock we were finishing up the last few holes on the back nine. A coyote ran across the fairway — I tried to get a photo of that — the first time we’d seen that here this year. We finished up on 18, tallied up our scores, and then hurried back to our house to watch the Superbowl on TV. 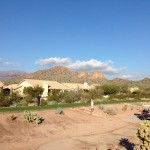 Dave on the tee 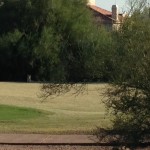 A coyote on the fairway 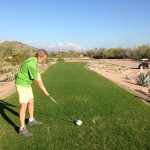 Let’s see if this one will go straight

We missed the first five minutes of the game. No score. I didn’t really like either the Seahawks or the Patriots, but I we decided to cheer for Seattle. The score was tied at 2 touchdowns apiece at halftime. I hurried outside to barbecue the pork chops while Sue made rice, corn on the cob, and broccoli and cauliflower. Delicious. We watched Katy Perry’s halftime show while we ate. 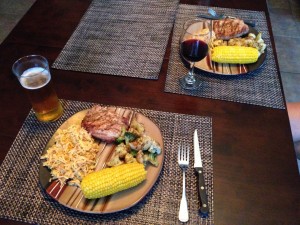 The second half of the game was more of the same — a good, penalty-free, close game. The Pats pulled ahead halfway through the final quarter. But Seattle came back, just like they did 2 weeks ago against the Packers. Then, just when it looked like the Seahawks were going to win the game with a last-minute score, THEY LOST! Most people would blame Pete Carroll’s asinine call for a PASS when they could have easily scored a running touchdown, but I knew the Seahawks’ fate was sealed when I decided to cheer for them! Oh well, two weeks ago the Packers GAVE the Seahawks a win; today the Seahawks ‘paid it forward’.

We didn’t waste any time switching over to PBS and another episode of “Downton Abbey” after the Superbowl. The highlight of that show was the chocolate-peanut-butter ice cream we had for snack during the hour. Then the CBC News. Sue sat on the couch and played Scrabble on her iPad while I wrote my journal entry.