Right after breakfast we were visited by the TV installer guy at our gate. He was delivering a new TV which Graeme bought — and we were about to have our TV replaced by Graeme’s old TV. After hooking up and setting up the new TV the guy came to our apartment and hooked up the old TV and digital set top box in our apartment. We hadn’t watched our TV for quite a while — it seemed to only get TV reception intermittently. After the installer left we sat outside and read our books. When at one point I went back in to check on our ‘new’ TV, all I got was “Check your satellite signal”. Hmmm… Graeme won’t like this.

After lunch we went for a walk into town. I’d tried calling Sue’s phone with my phone and vice versa and determined that our phones were not working either. So we took a walk into town, via a ‘new’ route over one of the hills behind our place, to the Spark phone store in downtown Napier. As we walked along the shore we could see a big cruise ship docked at the port. Once we got into downtown we saw how the small town was transformed when it got inundated by thousands of tourists. The streets were filled with buskers and entertainers and ‘painted statue’ people, all there to entertain and get tips from the crowds of cruise passengers. It was hard to walk along the sidewalk because of all the tourists. And the lineups at some of the trinkets and souvenir shops went all around the inside of the store and out the front door.

At the Spark mobile phone store I was hoping that our phone problems would be remedied and we might get an extra few weeks of coverage thrown in for my inconvenience. But first I had to make sure that our phones were NOT working — just in case. So I called Sue — without success. And she phoned me — same result. Good. At least the problem is still there. But when we got to the counter and the Spark guy tried dialling our numbers, our phones worked! What? Apparently I had been using the phone’s address book to dial Sue — and her address card had her suspended Canadian home phone number as the first number listed. So the trick is to delete our old phone numbers from the contact list! I felt a bit foolish for making such a stupid mistake. 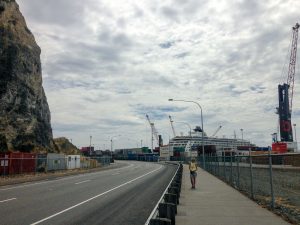 We walked around a bit more and then headed back home, this time via the beach and port route. As we passed the port we saw that busses were still taking cruise passengers from the ship into town.

Back at the apartment we FaceTimed with Max and his parents. Then Graeme came by for an after-work drink and to check on the TV. He wasn’t happy to learn that our TV was on the blink again. After a bit of trial and error we discovered that OUR TV worked only when their living room TV was on. When they turned theirs off, ours stopped working. Some more diagnostics and I figured it must be the cable splitter — but by now it was after 5 o’clock and the shop would be closed. So I offered to see if I could ‘fix’ it tomorrow. 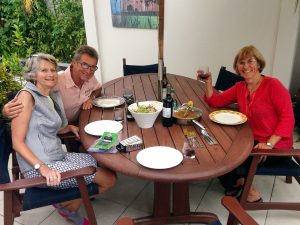 We’ve booked a B&B in Wellington for Saturday and Sunday night. That leaves us 3 nights here in Napier. Sue was making supper, using up the stuff we had in our fridge. Her pot of pasta sauce was probably too much for the two of us — so she invited Graeme and Robin to join us. We took our stuff out to their outdoor table and enjoyed a great supper together.

After supper we sat and visited. An English couple is staying in the B&B and after they returned from their dinner out, they joined us for a cup of tea and some visiting. Then, at around 10, we all went to our respective rooms. We had planned to make use of that ‘new’ TV and watch a movie, but by now it was too late and we were too tired. We watched the local news for the first time in a long time, and then went to bed.