I woke up at 6 and got up. Sue slept for a while longer. I could see the lights on in the kitchen — Robyn was up too. She had a 7am golfing date with her sister. I read the news on my computer.

After breakfast we frittered away a few hours. Another nice day here. At around 11 Sue made lunch for us. Then we got in the car and headed out to Cape Kidnappers, a half-hour drive around the coast from here. I had called the exclusive golf course yesterday (one of the top courses in New Zealand) and asked if they would let a ‘couple of Canadian tourists visit the clubhouse and perhaps even check out a few fairways and holes just to get same photos’. The guy on the phone had suggested that today was less busy than Wednesday, so it shouldn’t be a problem.

We got to the entry gate at the bottom of the hill. I buzzed the pro shop. A guy (I thought it sounded like the same guy I talked to yesterday) answered, asked how many of us were in the car, and then opened the electronic gate for us and advised us to ‘drive carefully’. We soon appreciated his suggestion: the narrow paved road wound back and forth, up and down, for the next 8 kilometres. It took us 15-20 minutes to drive the ‘driveway’ up to the exclusive lodge and clubhouse at the top of the hill.

We parked the car and went into the pro shop. The lounge down the hall looked full, busy, lots of well-dressed people sitting at the bar and around coffee tables, eating and drinking. Fancy.

We went into the pro shop and waited until the two people behind the counter were finished dealing with ‘customers’. Then I approached one of them, a girl, and asked if we might ‘take a look around’, maybe go out on one or two of the fairways if they weren’t occupied and maybe take a few photos. Oh no, that is not allowed. I tried again. But the answer was a very clear and firm no. The owner did not permit that; it was part of the ‘exclusivity’ of the course. When Sue asked if maybe we could just have a beer or coffee in the lounge, she got the same answer. Food was part of the golf package, and no, we could not go in there and just buy a beer. (The ‘package’ was $480 per person for a round of golf — and we were not here for that!) We explained that we had called yesterday and had been led to believe otherwise. Even the guy who let us in via the electronic gate knew why we were coming up, and hadn’t said we wouldn’t be allowed to have a look. All in vain. Okay, let’s go. 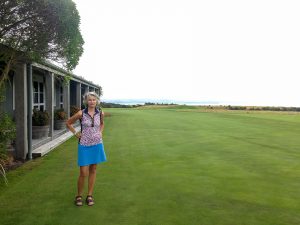 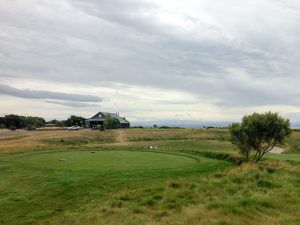 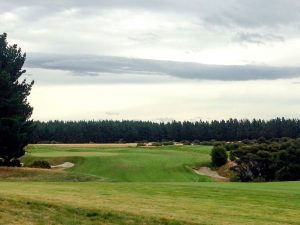 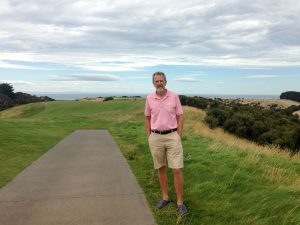 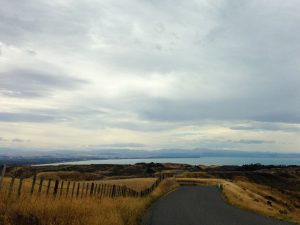 I DID take a few photos on our way back to the car — but the photos I had come here to get were quite a way out towards the sea; there’d be no way for me to get my own version of one of those classic ‘cover of a golf magazine’ shots from the driveway. 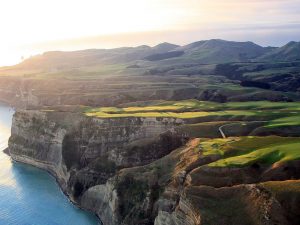 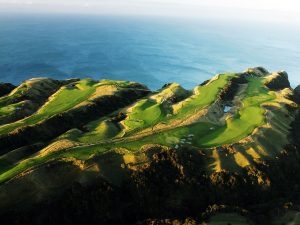 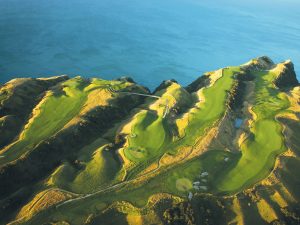 As we drove back down the winding road we ‘shook the dust off our sandals’ and assuaged our frustrations by saying some very nasty things about ‘that useless golf course’. It made us feel a little better.

We put “Hawke’s Bay Golf Club” into our phone’s GPS. Half an hour later we were once again (and maybe for the last time — the forecast is for some rainy days ahead) teeing off at ‘our’ course. And even though we played a couple of the holes twice (and marked down the better of the scores for each), the final scorecard was not something I would want to mark down for posterity in this journal. All I can say is that so far our clubs have managed to withstand some serious ‘ground-pounding’ after dribbling a golf ball a little farther down the fairway and there is a good chance that we’ll come home with the same number of clubs as we came here with. They may not be accurate, but they are strong. 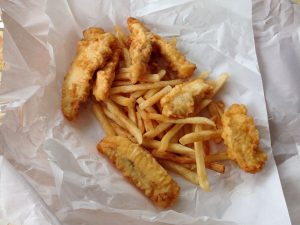 We drove the half-hour drive back to Ahuriri, the little neighbourhood where our apartment is, and stopped at The Frying Dutchman to pick up an order of fish and chips for our supper. We took it back to our place and ate it outside on the patio. Graeme stopped by for a little visit; he wanted to know about our trip up to Cape Kidnappers — and was almost as disappointed as we’d been about how that turned out. We sat and read for about an hour until the sun set and our eyes were too tired to read more.

We watched the CBC National — had to see how our Mr Trudeau did with his first visit to the Donald. Looks like he did okay; most of the people here in New Zealand seem to have a good impression of him. We started another Netflix series but even though it was barely ten o’clock, we turned it off after half an hour — we were just too tired and couldn’t stay awake any longer.