Beware the Ides of March. So said the soothsayer to Julius Caesar on this day 2059 years ago today. Not a good day for JC.

Our Sunday morning routine is back on track. We watched the CBS Sunday Morning show and had french toast with fruit for breakfast. We even watched Fareed — who had a special on futuristic endeavours in science and technology. So it was a lazy morning here, just the way I like it. We had the Valspar golf tournament (which we went to watch live last year when we were in Florida) on TV. We had a late lunch. After lunch we skyped with Tim and Carmen. At 2 o’clock we were out the door, heading to the Painted Mountain Golf Course. 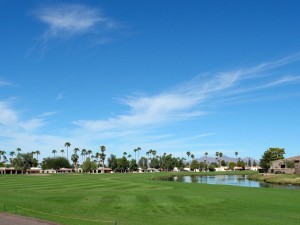 We were early for our tee time — the traffic on the #60 was no issue today! — so we chipped and putted for a while. We could have started earlier, but they were out of carts! When enough carts had come in we were off. We were paired with an older couple, but the lady claimed that she was just learning how to golf and would just as soon let us play ahead, so we were off as a twosome. We’d played this course once before. The first hole is a par 5 dogleg right, with water along the right side. Last time my first shot went into the water, and my second shot went into a bunker on the left. I think both Sue and I had a TEN  on that hole last time. Today we both shot our tee shots toward the bunker, and then had some good shots down the fairway. First hole, first par!

Ah, but golf isn’t that easy. For all the putting practice I’d had before the game, I still can’t sink a 3-foot putt when it counts. So at the end of nine holes, in spite of 3 pars and 3 birdies, I was 10 over par.

Ron and Sharon invited us to join them for a beer after the game. We sat on the outdoor patio at the clubhouse and had supper together. Some interesting talk — Ron is an enthusiastic hunter and fisher. He’s fished in Grand Rapids, Manitoba every year for the last 35 years. He also has an amazing collection of African trophies hanging in his ‘Africa’ room from his four years of going to hunt there.

When we got home it was around 9. We were going to finish watching “House of Cards” tonight — but I couldn’t find episode 40. I was sure we had 8 shows left, but after a bit of investigation I discovered that there are 13 episodes each season, and we had in fact watched to the end of Season 3 last night! Yikes! So now we have to wait until next year to find out what happens next.

So we watched a bit of a TV special about the tsunami of 2004. Then at around 10pm we watched “Labor Day”, a movie on Netflix. It was around midnight when we finally went to bed. We not only survived the Ides of March this year — we’d had a GREAT day.