We got up early and had a quick waffle in the hotel breakfast room. We lost an hour because of the time change. We were in the van by 8:20 and on the road. It was raining and miserable and the highway was very busy with rush-hour traffic all heading into Salt Lake City. Not ideal driving conditions. But then, not even an hour into the trip, the rain stopped and we were through Salt Lake City and the scenery was so beautiful — it was FUN to be on the road. Low-hanging clouds obscured the peaks of the Rockies to the east, but we could see the foothills and an occasional break in the clouds revealed the snow-covered tops of the mountains. Great! We were surprised at how many licence plates were from Alberta — especially big motorhomes and fifth-wheel trailers. I guess most of Alberta has been down in southwest USA and their rentals end at the end of March, and now, just like we, they are going home. 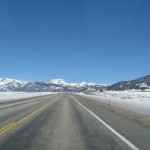 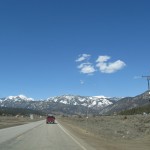 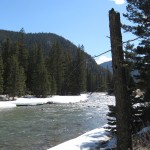 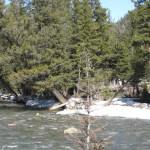 We stopped for lunch in Rexburg, just outside of Idaho Falls. We’d gone about 500kms. Sue took a turn at the wheel. She would drive through Idaho, then up past Yellowstone Park in Wyoming, and up into Montana. Most of the way was two-lane, not too busy traffic-wise, but not the 80mph speed limit of the freeways either. But the scenery was great. We passed through Big Sky in Montana, a favorite ski destination for many of our friends. We saw fast-running streams and quite a few fly-fishermen in their hip-waders angling for greyling in the freezing rivers. And because Sue was driving I was in charge of the ipod — so Johnny Cash inspired the Genius Playlist. And I read the Time magazine feature article on the costs of health care in America on my iPad.

In Bozeman, Montana we had a couple of super-thick Dairy Queen milkshakes (one peanut butter and the other strawberry) for our mid-afternoon snack. Switched drivers again. Now we were on the I-90. And at Billings we got on the I-94 which will take us all the way to Fargo. And the big highway had little traffic. Time to set the cruise at 135kph and enjoy the ride. That old Montana van of hours sure has served us well! We originally bought it for our 2008 Oregon cycling trip — but we like driving it and it’s so practical we keep taking it on these road trips: twice to Phoenix, once to Vancouver Island, last summer to Cape Breton, and this year to Palm Desert. And I don’t spend money on it and barely change the oil on it, and one of these days it will probably let us down, but today that 2001 Montana enjoyed the race through Montana.

We’d semi-booked a hotel in Billings but it was 5:00pm when we whistled through there so we decided to drive another couple of hours and call it a day in Mile City. Sue called a couple of hotels (we got the phone numbers from our GPS) and booked the Holiday Inn Express, the only ‘pet-free’ hotel here. By the way, do you know that when you call a hotel and ask for ‘pet-free’ they assume you mean pet-friendly and go on and on about how pet-friendly they are, not realizing they are talking themselves out of a sale? And when you type ‘pet free hotel’ into google the first five hits are for ‘pet friendly’ where pets stay for ‘free’! It’s disgusting! Everyone makes a big stink about ‘smoke-free’ but I’d way rather stay in a smoker’s room than sleep in a bed where some dog has shat in.

When we got into Mile City it was about 7:45. Since we had pre-booked our room we decided to find supper before checking in. Sue picked ‘Goliger’s Family Restaurant’. We sat in the bar and ordered fried chicken (my choice, not Sue’s). The waitresses were tired and not that excited about the customers. And more customers kept coming in. And when someone ordered the waitress would reply (loudly) “I’ll see what I can do when I get a minute!” A mom and her kid were busy putting money into a couple of the VLTs on the back wall. Three ‘real’ cowboys came in, sat down at the bar, ordered real Buds (in the bottle, not on tap) and steak sandwich with A1 sauce. And then one of them goes to get some cash from the ATM machine and pours it into one of the VLT machines in the back. Comes back, sits down at the bar, has a few more bites of his dinner. Back to the ATM machine for another hit. He heads to the VLT and blows that wad too. Goes back to the bar for more A1 sauce with steak. Sue and I sit there and shake our heads. We’re SO not hip. This all seems so stupid! If it was up to us, we’d set up an automatic deposit with the Steinbach Credit Union and have the money just go from there directly to the gaming commission. That way at least we could sit and eat our steak sandwich while it was still sparking hot out of the microwave and not have to waste all that time walking back and forth between the “money machines”.

We check in at the Holiday Inn — the receptionist says we’re so lucky that we booked when we did because although there were plenty of rooms available when we called, right after that they had a deluge of people and they are now solidly booked! Lucky for us.

We’ve got about 10 hours of driving left from here to home. We’ll try doing that tomorrow. That is, if the weather holds. And if our Montana keeps on truckin’.