We woke up early. Went down for breakfast at the Springhill Suites — great breakfast but there were SO MANY families, with little kids running around and making a racket. Oh well, we weren’t spending the whole morning here. We packed up and hopped into the van. The drive to Boulder was about 30 minutes. We passed the ‘official’ parking lot and parked on a small free parking lot just across the dam. Then we walked back across the dam to the ticket booth. We bought the $30 Dam Tour tickets. We went in to watch a 30-minute film about the project. Then we were split up into groups of 20 and taken on a guided tour. It was quite interesting. The dam is more than just a functional feat of engineering; it is also a fine example of 1930s architecture and craftsmanship. We went down several elevators down deep into the actual dam. Our ‘premium’ ticket allowed us to walk through narrow vent openings and look up and down fire escape stairways. It was all quite interesting. At the end of the tour we stood on top of the dam and looked out at the new Colorado River Bridge that opened in October 2010 — a very impressive structure that connects Vegas to the Grand Canyon and Phoenix, etc. And then we walked back to our van and left. 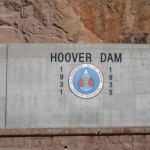 The Hoover Dam was built during the Great Depression, first and foremost to regulate the water supply for Southern California. Using it to generate hydro-electricity was secondary. 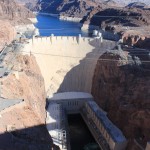 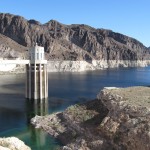 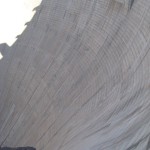 The concrete wall of the dam is made up of interlocking columns. 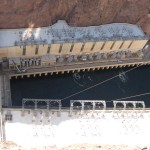 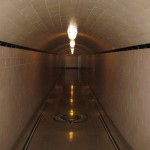 We went through a tunnel drilled in the 1930s for construction. 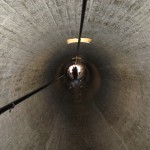 In small groups, we got to peek out of air vents opening to the downstream face of the dam while feeling the breezes rising from the river below. 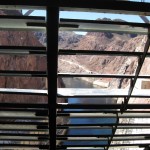 We peeked through these vents in the concrete face of the dam. 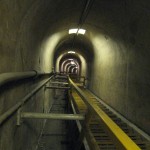 A set of fire escape stairs reach into the dark depths of the dam’s mass of concrete. 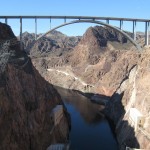 The Mike O’Callaghan-Pat Tillman Memorial Bridge is an arch bridge that spans the Colorado River between Arizona and Nevada. 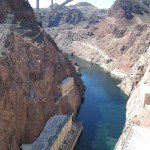 We left the Hoover Dam at around noon. The day was warm. LOTS of traffic going in to the dam so we were glad we’d gone early. Now we needed lunch. Well, we have that leftover pizza from last night — maybe we should pull over somewhere and eat that. We parked on a Dairy Queen parking lot and ate the pizza. Too full to go in for an ice cream after that. Back on the road. It was a very beautiful 5.5 hour drive this afternoon. The scenery is so spectacular. It seemed to me that there was way more traffic than other years — maybe because it’s Spring Break? Lots of trucks. I really didn’t put my cruise control on until the last hour. It felt a bit like driving in Europe — 80 miles per hour speed limit and constantly passing or being passed. Not very relaxing. But the red and orange rocks of southern Utah were stunning. Everything was going well. The outside temperature showed 26 degrees. And then, shortly after we’d stopped for an ice cream cone, the clouds rolled in. And it rained. And it got dark. And the temperature dropped to 5 degrees in less than half an hour. And everyone just kept driving like crazy. It lasted for about an hour. By the time we pulled into Orem, where we’d booked our hotel, the temperature was back to 16 degrees and most of the clouds were gone. 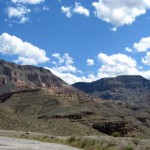 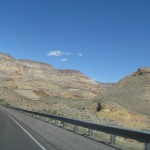 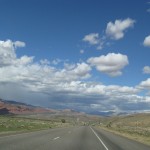 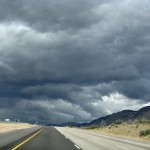 We found our hotel but instead of checking in, went to a small Thai restaurant just down the road. Very Thai. Simple, but good food and friendly service. We even got fortune cookies to finish it off. Maybe an omen: Sue’s fortune says, “You will soon be involved in many gatherings and parties.” Okay, not only are we heading back into the frigid cold, but apparently we’re jumping right back into a full social calendar. Oh boy.

Back in the hotel, Sue called Alex. I looked at our photos. Sue booked us a hotel for tomorrow night in Billings, Montana. We have a couple of very long days of driving ahead.