We were up before 7. Sue did one last load of laundry and I vacuumed. We had breakfast. We still managed to watch our morning CNN news shows. We packed our stuff into the van. We left our house at 9:30. We drove east on Hwy 10 to the turnoff to the Joshua Tree National Park. The drive up into the park wasn’t all that impressive. Nothing but ‘regular’ desert. We got to the south park entrance and paid our entrance fee and got a map. The park official recommended the Oasis at Cottonwood Spring, and then to take the extra drive out to Keys View on our way out of the park. So that’s what we did. We went for a 2-mile hike in the sand. There were lots of yucca plants but no Joshua trees. But the temperature was good and so was the path.

From there we headed up through the park, heading for the Keys View. Along the way we drove through Joshua tree forests which were very impressive. Lots of visitors in the park this Easter Sunday. There were regular turnouts along the road where we could stop and get out for a photo. The vegetation and the geology of this park is so unique, so unusual, and so varied. Big white jumbo rocks. ‘Orchards’ of Joshua trees. Then we got to the lookout. We could see all the way to the Salton Sea, to the white snow-covered peak of San Jacinto, to the desert cities where we’d just spent the past 3 months. Gorgeous. And the temperature was 16 degrees, 10 degrees cooler than it was on the drive down below.

Well, that drive through the park took longer than we’d expected. It was 12:30 and we were still miles from reaching Twentynine Palms, our lunch stop. So Sue starting making little mini-sandwiches (crackers and cheese) which we ate as we drove. We finally got to Twentynine Palms after 1:30. Stopped for burgers. And now the second half of today’s adventure began.

We were using the map which JP used when he drove down to Palm Desert this winter. It was a hand-drawn map that showed a route that took a ‘shortcut’ up to Las Vegas. The road was two-lane, mostly in good condition, no services, not too much traffic, a warning not to get caught speeding. It went through the Mojave Desert. We saw more Joshua trees, salt flats, lava rock, and big (empty) desert valleys. Sue read from the map and navigated the turns. The temperature was comfortable. 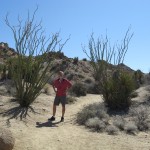 The ocotillos were just starting to bloom here in Cottonwod Spring, near the South entrance to the Joshua Tree National Park. 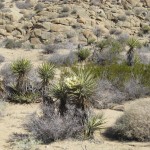 The yucca plants were also starting to bloom. 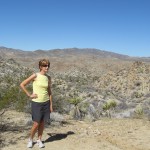 We went for a 2-mile hike in Cottonwood Spring at the Joshua Tree National Park. 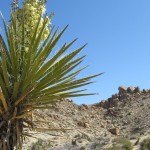 A yucca in bloom. 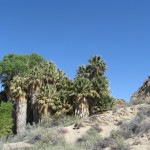 This interesting cluster of palms was called The Lost Palms Oasis, in the Joshua Tree National Park. 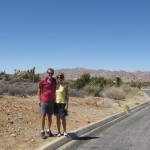 We spent our morning driving through the Joshua Tree National Park. This photo was taken on the Pinto Basin Road. 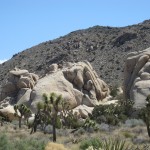 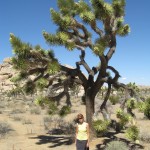 Sue, looking for shade under a Joshua tree. 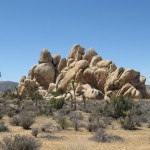 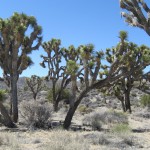 The Joshua trees were incredible — so many, and they looked like they’d been planted in an organized pattern, almost like a big orchard. 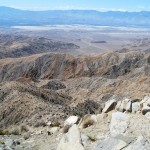 We took a short drive off the main road out to Keys View. From here, on a clear day, you can see the Salton Sea, the Desert Cities, and even all the way to Mexico! Straight out, in the middle of the valley is where we spent the past three months. 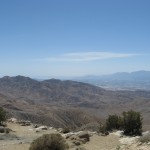 This is from the lookout at Keys View, looking out at the Salton Sea out near the horizon. 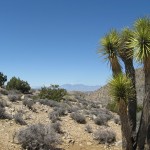 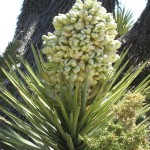 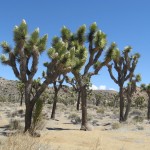 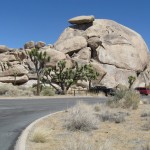 These jumbo rocks were especially interesting for lots of families who were out for an Easter Sunday visit to Joshua Tree National Park. 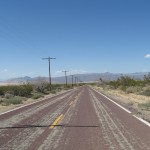 We took the ‘shortcut’ from Twentynine Palms up to Las Vegas. JP shared a hand-drawn map which we followed. Two-lane highway, virtually no services, but a very interesting 4-hour drive. 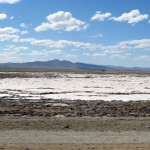 We passed these salt flats on our ride north to Las Vegas. 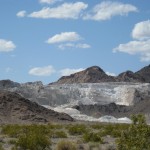 Looked like they were mining salt from the hills on our route to Las Vegas. 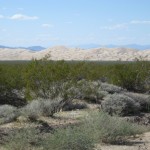 These are the Kenso Dunes, the largest field of sand deposits in the Mojave Desert.

We finally turned onto the I-15 just before leaving California. Man, there was traffic on that road! Trucks, trucks, and more trucks. And then, just as we got to the Nevada border, with it’s huge casinos standing tall as beacons just across the line, the 3 lanes of traffic going west (the opposite of our direction) turned into one very long parking lot. Three lanes of crawling vehicles. I guess everyone in L.A. had gone to Vegas for the Easter long weekend and was now trying to go back home — at the same time as everyone else. We were very glad we were going northwest instead of southeast.

Another 40 minutes from the border and we were at our hotel, a Springhill Suites hotel. We checked in. Had a drink. Got online and searched out a hotel for tomorrow night. Booked one near Salt Lake City. I checked out the tour options for our visit to the Hoover Dam tomorrow morning.

Then we went out for supper. We ended up at an ‘authentic’ Italian pizza place. We ordered 2 pizzas and could only finish half of each of ours. I guess we’ve got tomorrow’s lunch. Back at the hotel we looked at our photos, deleted half of them. wrote the journal and watched some TV.

Looking forward to day two of the road trip tomorrow.