Trust ye not in a friend, put ye not confidence in a guide… Micah 7:5 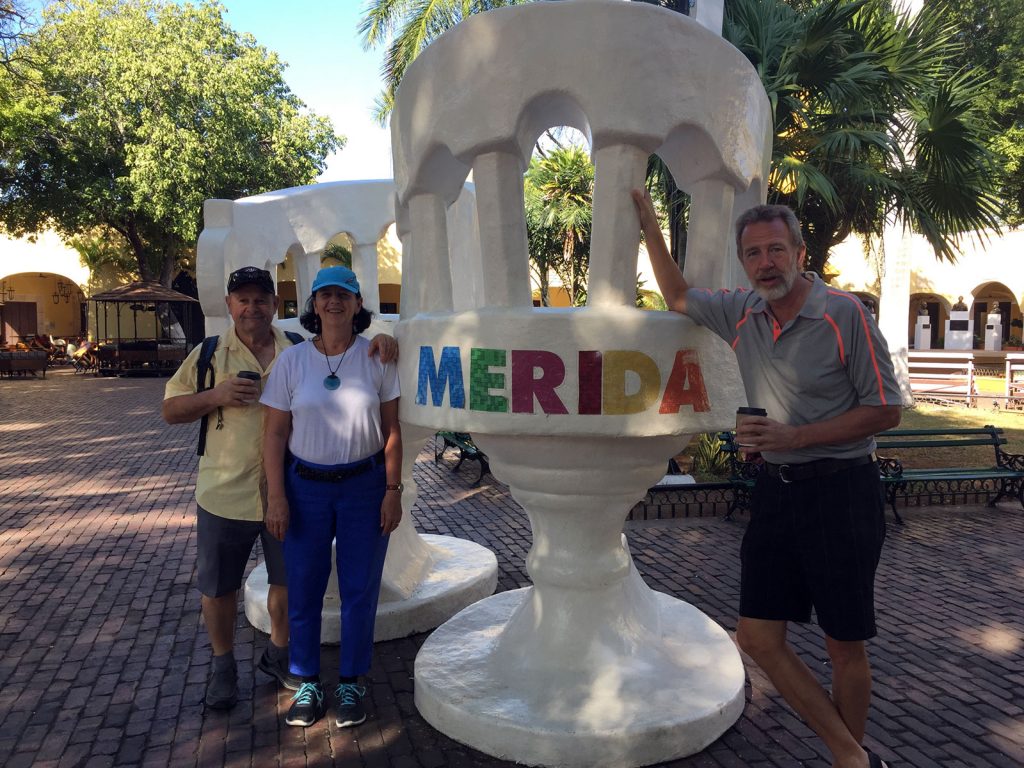 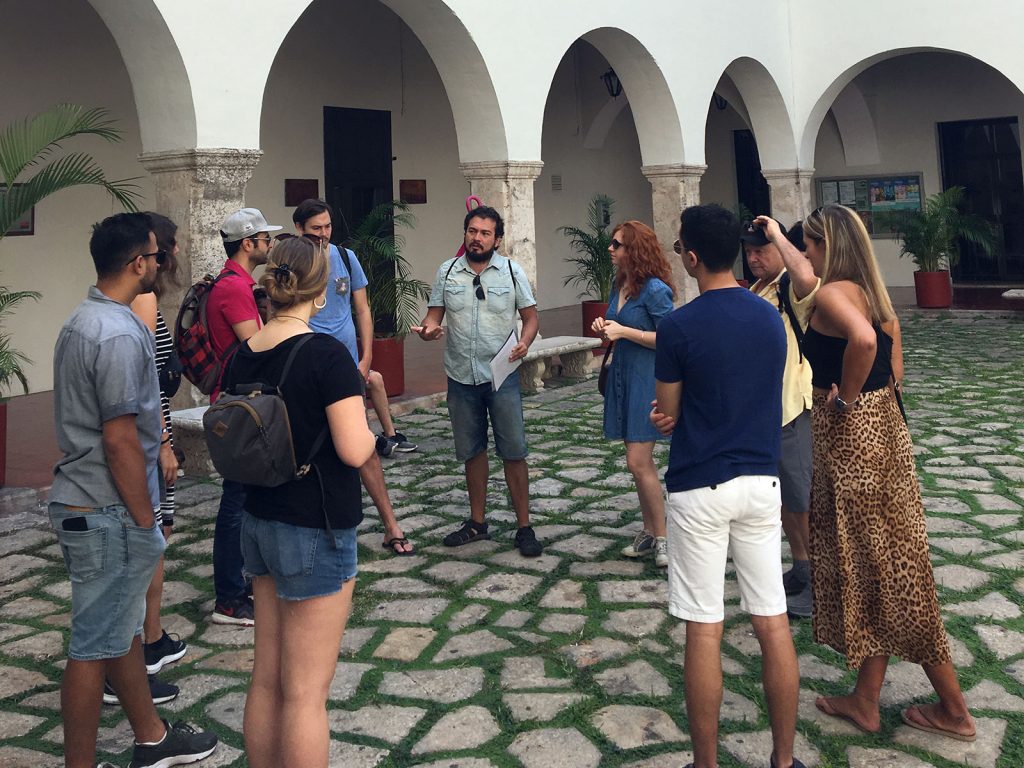 This morning after breakfast we went on a “Free Walking Tour of Merida.” We got an Uber to pick us up at the front gate and drive us smack dab into the middle of the city. He dropped us off at the Santa Lucia park, where we joined about 10 others to wait for our tour guide.

These “free” city walks are very popular in many of the major cities around the world. The Driedgers and the Nikkel have been on many of them. Most of them are VERY good. Many of the walking tours I’ve been part of feature a tour guide that is knowledgable and entertaining and easily worth the suggested ‘tip’ you pay at the end of the tour. “Merida Walks” is new in Merida. There are other city tours, but our free walking tour was a new business.

Our tour guide strolled into the park carrying a big pink umbrella. He gathered us around him at a few minutes after 10 and we all introduced ourselves to each other. He began by pulling out his picture book and giving us a short history lecture about the square we were starting from. And then we were off to the next ‘highlight’.

The group consisted mostly of German university students who were on a little furlough or holiday from school. A couple of them turned out to be more knowledgable than our guide, who came from Mexico City and had been in Merida for just over a month. Our guide seemed to enjoy giving us the history of the ‘fathers’ of the city of Merida. Well, it wasn’t the most interesting or entertaining city tour, but it DID get us into the heart of Merida and gave us an excuse to walk around a bit, and to enjoy a nice lunch in one of the city squares. 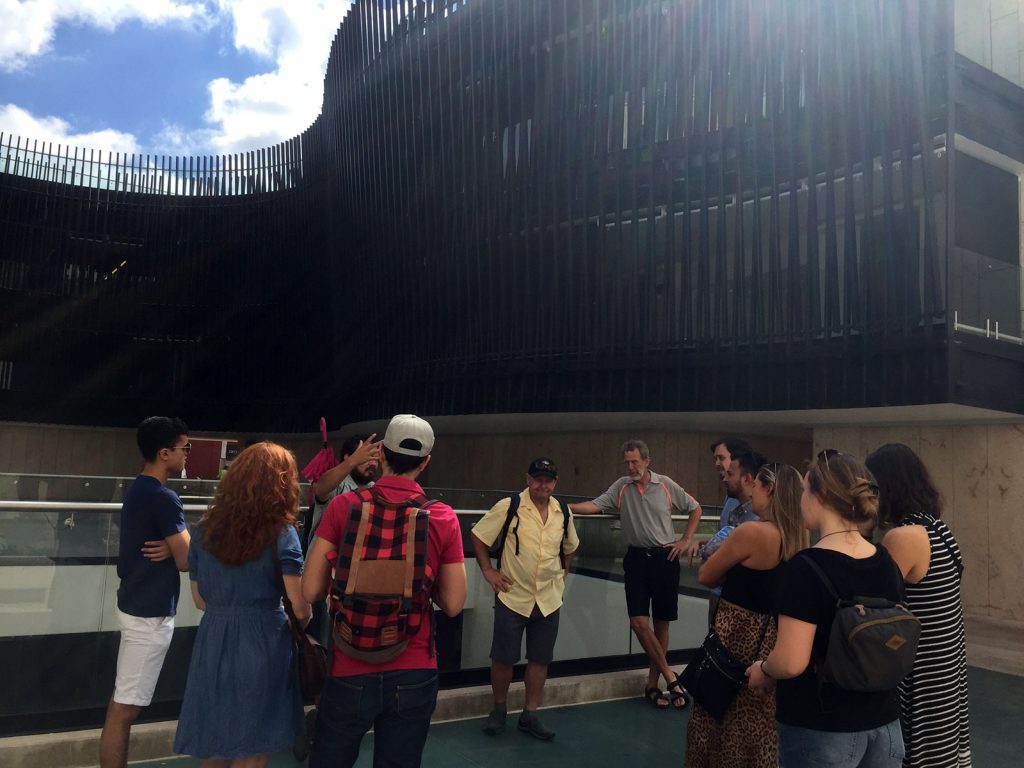 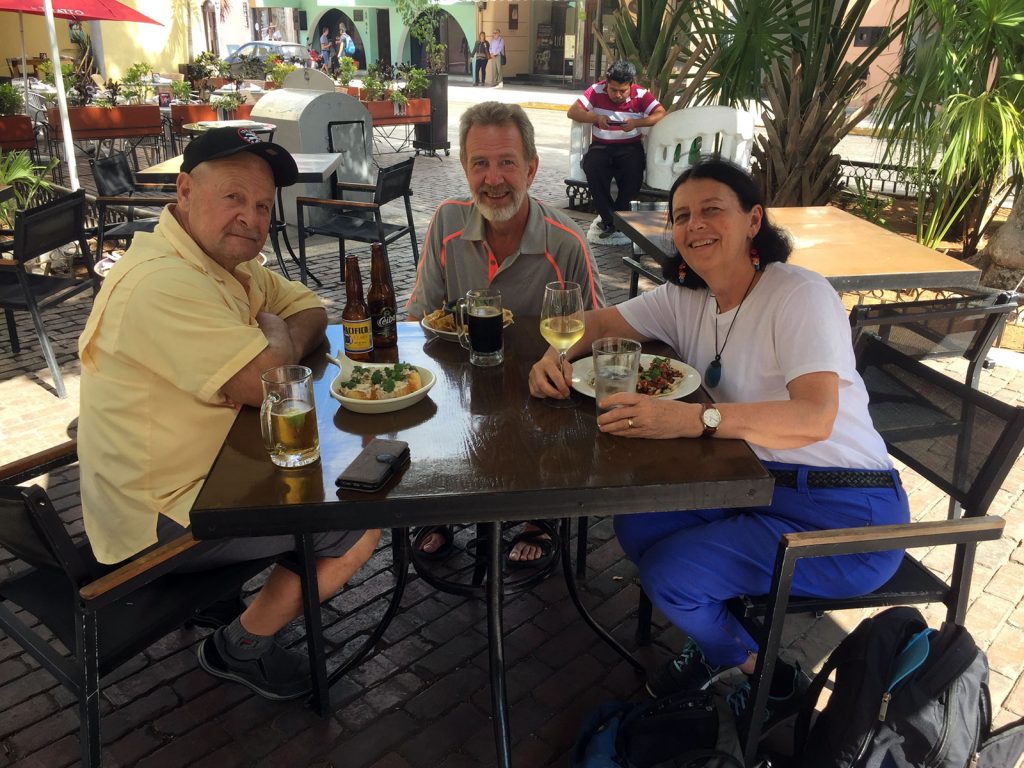 After lunch we looked for a Telcel phone outlet that would help install SIM cards and configure them for Dave and MaryLou. We got that done. Then we “Ubered” up to the big Chedraui grocery store and picked up some supplies. Mario, our landlord phoned, saying he was at the house with some plumbers to install the new toilet. Great!

When we got to our apartment Mario was gone and the toilet was still in the box in the garage. Oh, oh. But he texted, saying the plumbers needed some more parts and would be back soon. And they were. And they installed the new toilet. And it works. And they still need to fix the water dripping below the kitchen sink. Maybe tomorrow.

We had the fixings we needed for supper in. MaryLou made salads for each of us. Dave and I made grilled ham and cheese sandwiches.

After supper Dave watched some of the Raptors’ basketball game. MaryLou and I worked on our respective computers. Then it was movie time. Dave’s choice was “Leave No Trace”. It’s the story of a father with PTSD and his 13-year-old daughter. They are living off the grid, trying to survive in the woods. The movie was pretty good.

“Night snack” was a brownie with ice cream and a small glass of Baileys. By midnight it was time for bed. Tomorrow: back to the golf course.