In all toil there is profit, but mere talk tends only to poverty. Proverbs 14:23

I slept in this morning. By the time I was downstairs drinking my coffee Dave had already been up for over an hour and had finished his breakfast. MaryLou had already written several long articles and read a couple of books on her kindle.

As soon as I had put away my breakfast dishes we were off to the golf course. We got the caddies to get our bags out of storage for us and checked in with the starter. And just like that, we were off! 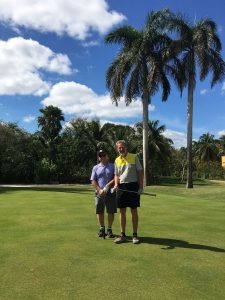 Today I played with one of those deep fluorescent red balls for most of the day. It’s actually a bit harder to ‘find’ it in the grass, but once I’d started I thought I might as well continue. It didn’t help my game, and it didn’t survive 18 holes, but it IS something I can say about the game today.

On about the 12th hole we caught up with golfers ahead of us. And we slowed down. And then the two guys on our tail starting posturing their impatience. And then Dave asked them if they’d like to join us. And they did. And they were fun to golf with — both were hitting the ball well, and the one guy was 81-years-old and hit the ball as far as we did and wasted no time on the course.

I was trying to break 100, but scoring a ten on hole 11 pretty much kiboshed that idea. And then I donated that nice red ball to someone’s swimming pool on about the 16th hole.

At the seventeenth par 3, Jerry, the 81-year-old took a couple of nice photos of Dave and me on the green. 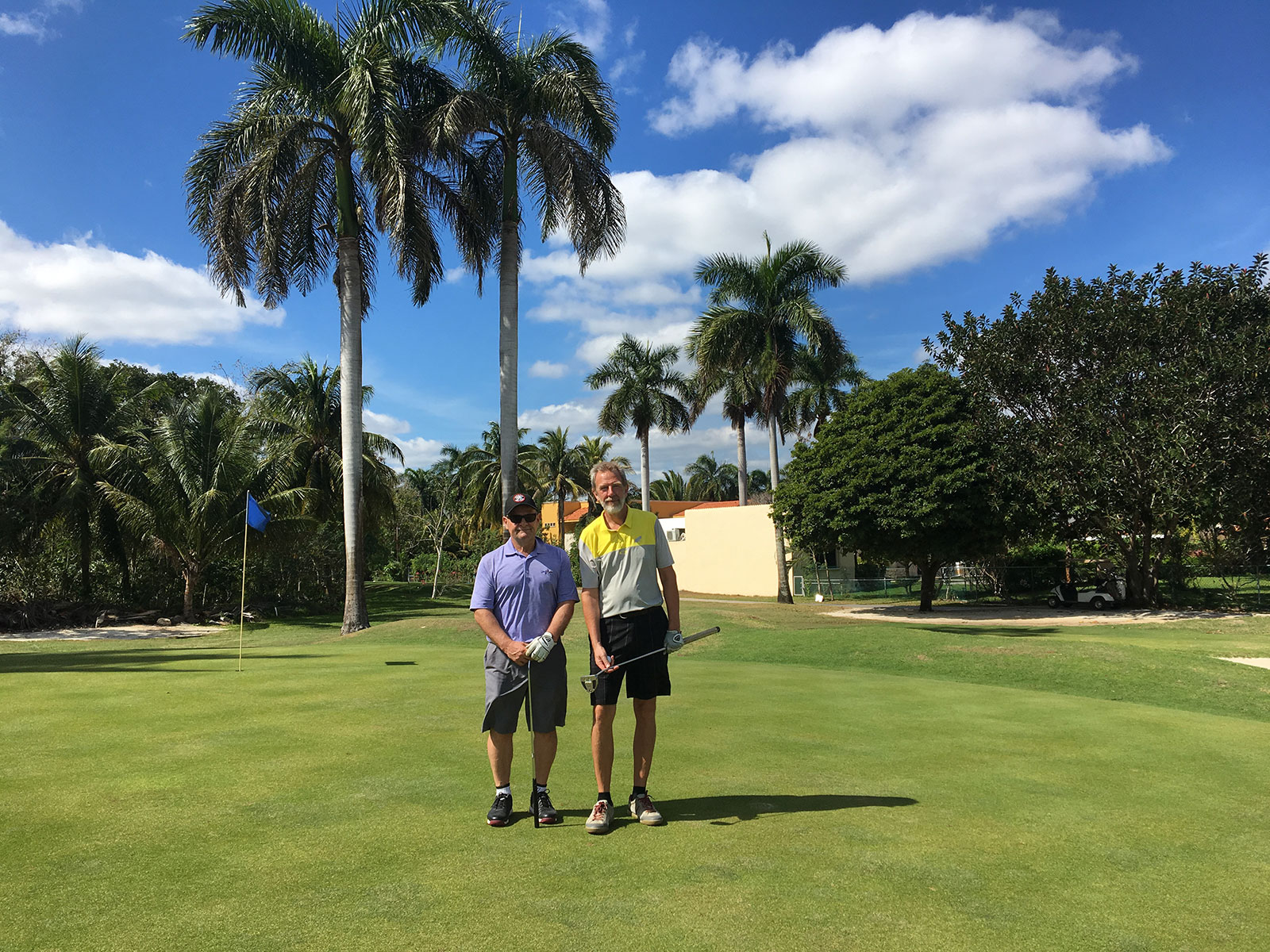 After the game we went to the clubhouse for a cool refreshing cervesa. Then I went back to the house to shower and do a load of laundry. Dave is all gaga about showering at the country club. MaryLou was riding the stationary bike at the country club gym. Man, we are living the good life here!

I spent most of the afternoon working on the computer. Just before six we called an Uber and went into town for Mexican food. The restaurant that Dave had chosen didn’t work out for us — they told us their kitchen was closing shortly so only drinks there. We walked across the parking lot to the Italian restaurant. They were waiting for us. Many waiters hovering over us, just itching to take away an empty plate or bring us another drink. My food was very good.

We got back to the corner store (where the Uber picks us up and drops us off) and walked back to our place (about 800 metres). It was MaryLou’s turn to pick a movie. But the Raptors and the Jets were playing tonight (not each other, but each in their own sport). So MaryLou soon headed upstairs to do her own thing. And I was working on my computer and listening to the play-by-play on Dave’s iPad.

I was too tired to continue. I actually had a little nap downstairs on the couch until about 10:30. Then I went upstairs and got ready for bed. I wrote my journal, tried to watch the CBC News, and was asleep by 11:30.