Then I commended mirth, because a man hath no better thing under the sun, than to eat, and to drink, and to be merry: Ecclesiastes 8:15 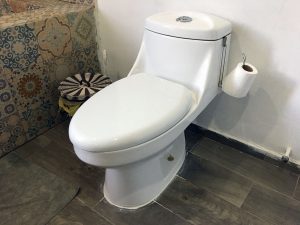 Friday. A ‘lazy’ Friday in Merida. No golf this morning. No tour this morning. No agenda. I like that. Things are getting better here every day. We’re getting quite comfortable with our apartment and with our surroundings. There are still a few things that need a bit of help in here but now that I have a new (working) toilet, life is pretty good! And the Uber thing is so good we’ve more-or-less given up on checking out a cheap car rental.

We had breakfast and then settled into our respective places. Reading a book or a short story. Working on the computer. Checking out Colbert and the sports highlights from last night. Looking up the best place to eat and what to do on the weekend. We’ll likely not golf Saturday and Sunday because the course is so busy with Meridians on the weekend.

MaryLou went to the gym for an hour. When she returned we made sandwiches and had lunch. 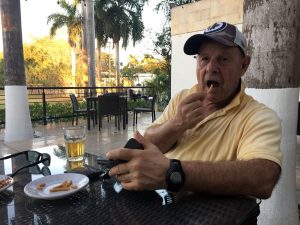 Dave had suggested that we try golfing in the AFTERNOON for a change. Maybe the temperature would be a little cooler. Maybe the course would be virtually empty and we could finish 18 holes in 3 hours. And that’s what we did and it turned out to be a GREAT idea. We both had some good holes, but in the end I was nowhere near breaking a hundred and Dave ended his round with an atypical string of mis-hits. It’s a good thing we are so easy-going. It’s a good thing that the waiters working the patio bar are so friendly and quick with their service. “Man hath no better thing under the sun, than … to drink…”

Speaking of which, it’s Friday. And after far too many missed opportunities, tonight we were going to have Friday Night Pizza Night. I wasn’t quite sure that my very limited Spanish would be enough to order in a pizza, but it turned out that Domino’s has an online ordering site that works just like it does at home. And 30 minutes later a delivery guy on a motorcycle roared up to our apartment. And a ‘grande’-size turned out to be just about exactly two times as much pizza as we would eat tonight. “Man hath no better thing under the sun, than to eat, and to drink…”

Movie time. MaryLou’s turn to pick. But MaryLou was down for the count! Feeling poorly. A bit of a sore throat. Oh, oh. Hope she’s not getting a miserable cold. She opted to head upstairs and go to bed early. Dave and I would have to “be merry” on our own. Dave suggested a violent but highly acclaimed movie — MaryLou wouldn’t want to watch this anyway, so maybe it would be the perfect time for us to watch it. “Mandy”, starring Nicolas Cage. We watched for nearly an hour. The movie was far more BORING than violent! Not only was there no bloody action; there was NO BLOODY ACTION! Skip it. What else can we watch?

We settled on “Fahrenheit 11/9”, the latest Michael Moore documentary. Well THAT movie WAS scary! Scary what has happened to politics in the USA! Scary how much the Trump phenomenon has parallels to Nazism in 1930s Germany.

Time to call it a night. I went upstairs and brushed my teeth. I watched the CBC National while I wrote my journal. Tomorrow’s plan was to take a trip up to Progresso, the beach town about 25 minutes north of here — but we’ll see how everyone feels in the morning.